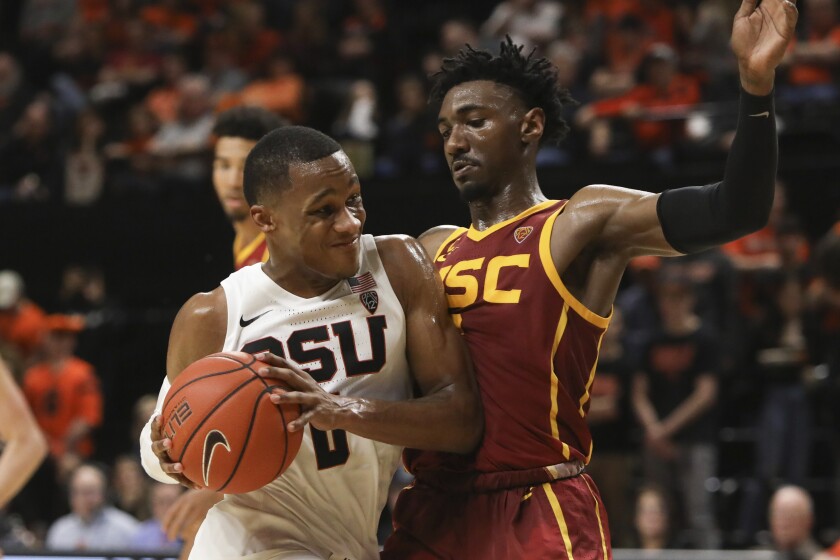 Onyeka Okongwu shifted the box holding his postgame meal of macaroni and cheese, baked beans and cornbread pudding in one hand so that he could simulate his favorite dunk with the other.

The USC freshman forward stretched his right arm over his head, nearly brushing the exposed pipes in a basement hallway, before ferociously swinging it forward.

“The one-handed one like this,” Okongwu said amid the blur of motion, “that was my favorite one.”

There were other candidates and seemingly no consensus among players and coaches after Okongwu’s three dunks over the game’s final 10 minutes powered the Trojans to a 75-55 victory over Oregon State on Saturday afternoon at Gill Coliseum, providing an emphatic retort to a disheartening double-overtime loss two days earlier.

Teammate Jonah Mathews preferred Okongwu’s monstrous two-handed dunk after taking a pocket pass from Elijah Weaver because it extended a double-digit lead and quieted the crowd. There was another two-handed dunk several minutes later that had his teammates on the bench dancing in front of their seats.

“Some of the dunks tonight were just spectacular,” USC coach Andy Enfield said. “The first one was good down the lane, and the one about a minute or two later was just ridiculously impressive. He’s a special young man, very explosive, especially with a running start.”

Okongwu finished with 18 points on seven-for-eight shooting, leading a rare display of shotmaking in which the Trojans (16-4 overall, 5-2 Pac-12 Conference) made 16 of 22 attempts (72.7%) in the second half while shooting a season-high 64.6% for the game. Mathews added 16 points and Weaver added 13 off the bench for the Trojans, who had five players score in double figures.

Mathews said the Beavers (12-8, 2-6) focused their defense on stopping the ballhandler, freeing Okongwu on multiple rolls to the basket in which his teammates found him for dunks and layups.

Okongwu also sparked his team’s response after Oregon State shaved what had been a 22-point deficit to six several minutes into the second half. He made a jump hook before blocking a shot by Beavers 7-footer Kylor Kelley, leading to a layup by Weaver that extended the Trojans’ lead back into double digits.

It was the start of a 14-0 run in which USC also continued to disrupt Oregon State defensively. The Beavers’ Tres Tinkle finished with 17 points but needed 16 shots to get there, and guard Ethan Thompson was held to eight points on three-for-13 shooting. Okongwu blocked two shots, including one swatted into the fourth row of seats, and disrupted several others.

“Having him down there is just a huge presence,” Mathews said, “and it helps us.”

Even given their late-game meltdown against Oregon on Thursday, the Trojans have built a solid NCAA tournament resume nearing the midpoint of conference play. USC moved back into a tie for second place in the Pac-12 standings, and Enfield pointed to his team’s five road victories and three neutral-site wins as evidence of strong play from a group featuring five freshmen in its playing rotation.

“For this part of the season,” Enfield said of his team’s stockpile of victories away from Galen Center, “that’s a credit to our players.”

Okongwu said his play against the Beavers was a reflection of feeling more confident than he had all season. His one-man dunk contest over the game’s final minutes invigorated him as well as his teammates and made him want to top each play with something even more spectacular.

“When they’re hyped up for me,” Okongwu said, “it just gives me more energy to do the same thing.”