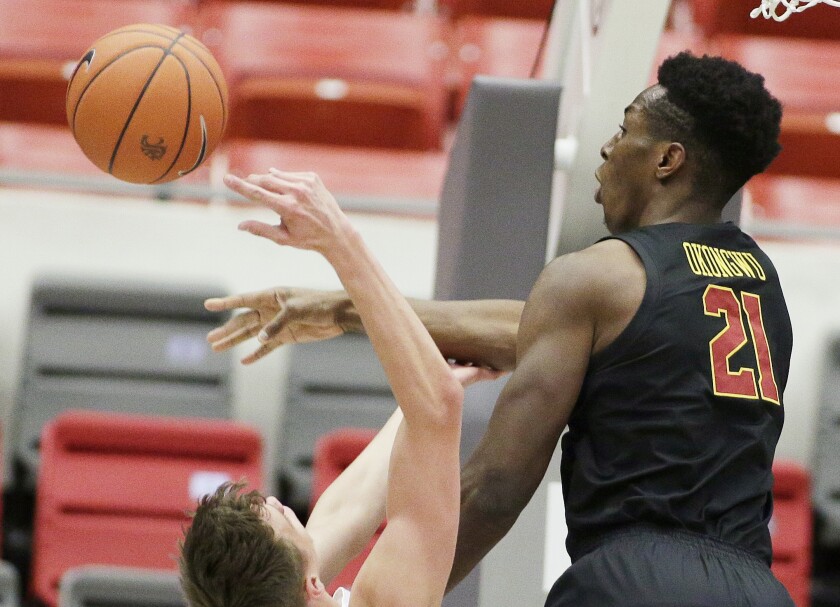 Onyeka Okongwu did a little bit of everything Thursday night.

The star USC freshman dominated the paint, swatted balls and jumped over defenders on the way to his sixth double-double and a 65-56 victory over Washington State in the Pac -12 opener.

“He was really good tonight,” said USC coach Andy Enfield. “They were a little under-sized at the power positions and we were big so he did what he is supposed to do.”

Okongwu finished with 27 points on 12-of-14 shooting, grabbed 12 rebounds and had two blocked shots in his first game back after suffering a mild ankle sprain. Jonah Mathews had 10 points and four assists and Elijah Weaver had eight points and four rebounds for the Trojans.

USC (12-2) dominated the game physically, controlling the paint and holding Washington State to just 28% shooting. The Trojans have now won six in a row and are 3-0 on the road this season.

“We played great defense and held them to 27 % from the field,” Enfield said. “We challenged a lot of shot and I thought our guards played outstanding defense. Our bigs were able to help a few times and make them take tougher shots as well.”

Isaac Bonton scored 18 points and Tony Miller had 15 points and 11 rebounds for Washington State (9-5). CJ Elleby, the Cougars leading scorer who averages 20.1 points per game, was held to seven points on 3-of-22 shooting. This was the first time this season Elleby has not scored in double figures.

Washington State was overpowered by the bigger and more physical Trojans to start Pac-12 play, posting both a season low in points and shooting percentage. Tonight’s loss comes after the Cougars notched six consecutive wins against non-conference opponents and went undefeated in December.

The Trojans jumped out to an early 22-9 lead after a 17-4 run that was sparked by a fast-break layup by Jonah Matthews.

Washington State responded with a 14-5 run over the last seven minutes to make it 31-27 at the break.

The Cougars got within three with 8:09 left in the second when Jervae Robinson stripped the ball and dished it to CJ Elleby for a monster dunk. That was the closest they got.

“We gave ourselves a chance,” said Washington State coach Kyle Smith said, “We can’t expect to win the way we shot it, we got to be more patient.”