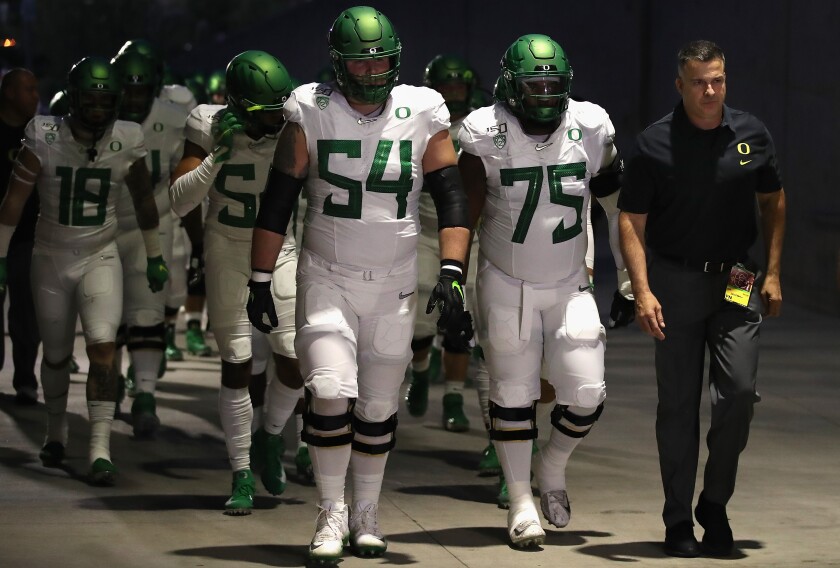 Mario Cristobal did not mean to be controversial on the eve of the Rose Bowl. The coach was only stating a fact about the decision many of his Pac-12 Conference-champion Oregon Ducks have made to migrate north from one territory, becoming a fierce flock that flies to a neighboring one.

“For us, this is home state,” Cristobal said of Southern California, a region that has produced more than 30 current Oregon players who come from within 70 miles of the Rose Bowl.

“That’s what it is. We’ve made it a priority. We think that the coaching here, the high school football here, is off the charts, as good as it gets in the country. … So every opportunity to be in a big game like the Rose Bowl, I think it certainly helps recruiting.”

Every Pac-12 program harboring realistic dreams of playing in “the Granddaddy of Them All” or the College Football Playoff has to make hay here. This has always been and will be the casebecause of simple demographics. But maybe Cristobal’s comment Tuesday morning came off as a not-so-subtle dig at USC and UCLA because of recent developments, such as the Ducks plucking the top-rated defensive player in the country out of Southern California for the second consecutive year.

First, in Oregon’s 2019 recruiting class, ranked the best in the Pac-12, it was defensive end Kayvon Thibodeaux of Oaks Christian heading north, along with 10 other Southern Californians. Thibodeaux had nine sacks as a freshman.

In the 2020 class, Upland’s Justin Flowe, considered the best linebacker prospect from the region in recent memory, chose to follow Thibodaux to Eugene. A late push from USC created some buzz near the end of Flowe’s recruitment, but in the end he put on a green hat featuring a yellow O. Losing out would have been easier for the prideful Trojans if he had picked other finalists Clemson or Miami.

Now, here was Cristobal in Los Angeles this week, coming off like some kind of conquistador. The second-year Ducks coach said he had not been to Pasadena before but, with Oregon about to take on Wisconsin in Wednesday’s Rose Bowl game, it is easy to imagine him standing on the stadium’s pristine grass, ready to stick a flag deep in the soil.

If Southern California is going to be home for Oregon, then the Rose Bowl would make for a fine front deck with stunning sunset views. Cristobal knows that the Ducks with local ties would love to make this a tradition — if they don’t get into the playoff, of course. That became their reality this season after a surprising second loss at Arizona State on Nov. 23.

“Our West Coast players, this has been their dream, always, to not only get here and play here and whatnot, but to have a chance to be successful on January 1st,” Cristobal said. “They can tell you about all the big-time games, the players that have shined in a big-time way, and they’re learning about the pageantry that surrounds it.”

Because of Oregon’s connection to alum Phil Knight and Nike, the sleek uniforms and the shiny facilities, the Ducks have recently been viewed as all flash. Cristobal, as an offensive line coach by trade, has spent the last few years trying everyday to add substance.

Oregon can still be explosive, but Cristobal is more concerned with dominance along the lines. Left tackle Penei Sewell winning the Outland Trophy as the nation’s top lineman is a good sign, and Cristobal could not have asked for a better opportunity to gauge his program’s development than a matchup with Wisconsin, the brawniest crew from the Big Ten Conference.

“We kept the pads on now,” Cristobal said. “Football still is, right, a series of collisions and whatnot. You have to stay physical. … The best way to put it is nothing but being at your very best is going to be anywhere good enough when playing a team like the University of Wisconsin.”