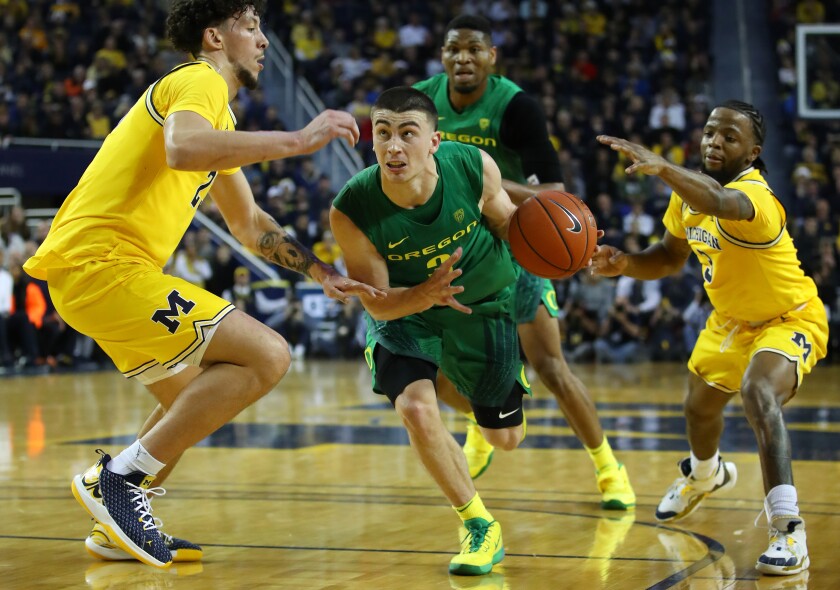 Pac-12 basketball is more than just hype this season

The slick hype video, a staple of Pac-12 basketball media day, served up the usual array of breathless boasts. It touted “an unprecedented balance of old and new” players, “one of the greatest recruiting hauls in conference history” and “a handful of triple threats and double-double machines” complemented by “sharpshooters and destructors, playmakers and ambassadors.”

Those claims might amount to more than puffery, even if James Naismith may have failed to comprehend the roles of destructors and ambassadors in his beloved game.

The Pac-12 is back, or at least double-chiming in the cabin and lowering the landing gear on final approach.

Oregon and Arizona are again players on the national scene, and several other teams appear poised to give the conference its deepest pool of NCAA tournament teams in at least four years.

“I think the conference has improved even beyond what my anticipation was going to be,” said Sean Farnham, the former UCLA forward who is an ESPN college basketball analyst. Farnham mentioned Utah defeating then-No. 6 Kentucky in Las Vegas and Stanford losing only to Kansas and Butler as evidence of the conference’s depth of quality teams.

March Madness, in Pac-12 terms, recently meant sweating out the labored arrivals and speedy departures of a handful of conference teams in the NCAA tournament. The Pac-12 went 0-3 on college basketball’s biggest stage two seasons ago (two phrases that will forever make UCLA fans shudder: “First Four” and “St. Bonaventure”) and needed Oregon’s underdog run to a regional semifinal, as a No. 12 seed, to salvage its showing last season.

Volume shouldn’t be an issue this season. Farnham says he foresees the Pac-12 sending as many as six teams to the NCAA tournament.

Preseason conference favorite Oregon (11-2) is ranked No. 4 in the country, in position for not just a trip to the NCAA tournament’s second weekend, but also its third, à la the school’s memorable duck walk to the Final Four in 2017.

Just as notable, the Pac-12 could double its number of NCAA tournament participants from each of the last two seasons, when its Big Dance card had enough room for only three teams. Oregon, Stanford, Arizona and Colorado all reside in the top 23 of the NET, the NCAA Evaluation Tool that is used by the NCAA tournament selection committee to assess teams. Washington, Arizona State and Utah are inside the top 65, putting them in bubble territory.

The Pac-12 is in better shape for March thanks to what it did in November and December. Its .739 winning percentage against Division I non-conference opponents ranks fourth nationally.

Seven Pac-12 teams have already won at least 10 games, helping the conference notch its best non-conference winning percentage since it prevailed in 78% of its non-conference games during the 2015-16 season. That was the same season the Pac-12 sent a record seven teams to the NCAA tournament.

Among the victories this season were six triumphs over nationally ranked teams, including five over top-15 teams. Oregon owns three wins over ranked teams, and its only losses have come against then-No. 8 Gonzaga and then-No. 6 North Carolina. The Ducks embody the hype video with their blend of old and new players, senior point guard Payton Pritchard shepherding coach Dana Altman’s latest flock of fabulous freshmen.

Arizona’s influx of newcomers has provided its three leading scorers, all freshmen who have helped the No. 25 Wildcats (10-3) get back into the rankings one season after finishing only two games above .500.

The figure to keep in mind in the coming months might be 12, the number of conference wins that Farnham said should safely ensure entry into the NCAA tournament as the Pac-12 completes its final 18-game conference schedule before moving to a 20-game schedule next season.

Farnham says he considers USC (11-2) among the teams vying for one of those tournament bids, but he noted the Trojans had some ground to make up after completing a lackluster non-conference schedule in which they defeated Louisiana State but were stomped by Marquette.

“What that means is you start conference play with three straight road games,” Farnham said of the Trojans, whose Pac-12 opener is Thursday at Washington State. “Go get two of the three. Beat Washington at Washington. Start with a road sweep of the Washington schools and I think all of a sudden people would start looking at USC really differently.”

Meanwhile, media members who picked UCLA to finish eighth in the conference might have given the Bruins (7-6) too much credit. Coach Mick Cronin’s stylistic makeover may require a longer slog than anticipated, with his players not just struggling with opponents but also themselves.

“They’re fighting the old habits they had, and they’re not fully embracing and putting forth the effort that is necessary to win basketball games with this roster,” Farnham said. “They are not talented enough on the offensive end of the floor to beat you by playing offense. They have to do it by a toughness and an effort on the defensive end of the floor that will wear down their opponents, [so] they can manufacture offense off of their defense.”

Messages that probably won’t appear on any promo video but should be taken to heart just the same.