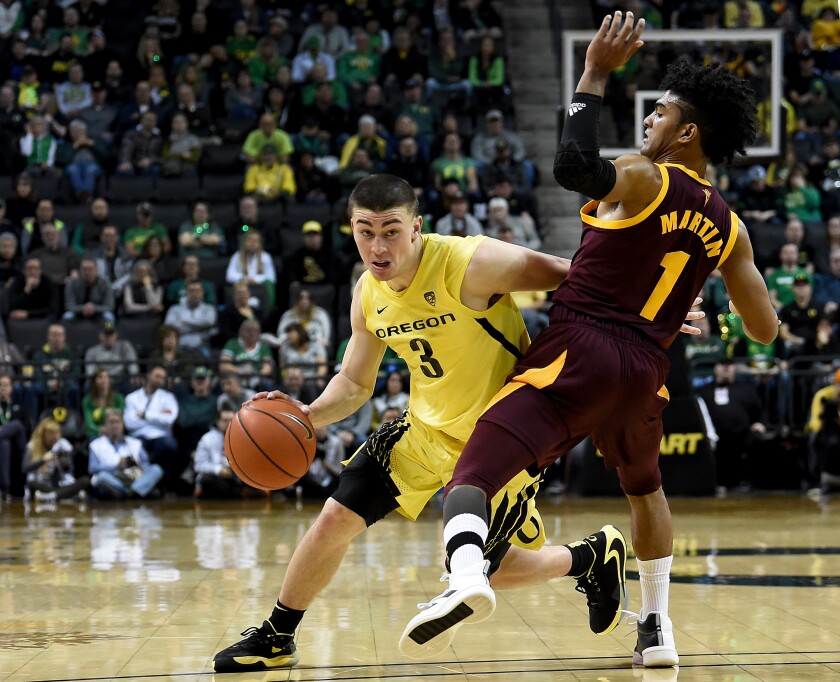 Much of the game was a personal duel between Pritchard and Arizona State’s Remy Martin, who also had 29 points.

Arizona State (10-6, 1-2) remained one of only two Pac-12 teams, along with Washington State, that has never won at Matthew Knight Arena, which opened in 2011.

Pritchard’s sixth three-pointer pushed Oregon’s lead to 45-31, but the Sun Devils battled back and Martin scored seven consecutive Arizona State points to cut it to 53-48.

The Ducks pushed the lead back into double digits, but again it was Martin responding with another seven-point spurt to draw the Sun Devils to within 65-60 before Pritchard’s three-point play put Oregon back up by eight.

The Ducks are 10-0 at home, sweeping the Arizona schools at home for the second consecutive season.

at Stanford 88, Washington State 62: Freshman Tyrell Terry scored a season-high 22 points and grabbed six rebounds in helping the Cardinal win for the seventh time in eight games with a victory over the Cougars.

Carlos da Silva scored all 15 of his points in the first half for Stanford (14-2, 3-0), which beat Washington State for a seventh straight time.

Isaac Bonton reached double figures in scoring for the sixth consecutive game, netting 15 points for the Cougars (10-7, 1-3), who have lost three of four to open conference play since a six-game winning streak. Jeff Pollard had a game-high 10 rebounds and scored eight points.

Daron Henson, who hadn’t played since a two-minute appearance in Washington State’s season-opening win over Seattle, was four for six from three-point range and scored 12 points.

at California 61, Washington 58 (OT): Matt Bradley banked in a three-pointer with six seconds remaining in overtime, lifting the Golden Bears to a win over the Huskies.

Jaden McDaniels had 12 points and 11 rebounds for Washington. The Huskies (11-6, 1-3) rallied from 10 down in the final 12 minutes of the second half but made only one basket in overtime.

Bradley scored on a left-handed layup with 1:35 left in overtime to give Cal a two-point lead. The teams traded misses before Washington’s Nahziah Carter sank two of three free throws to make it 58-all with 34.2 seconds left after being fouled by Anticevich while taking a three-pointer.

Bradley, Cal’s leading scorer this season, got the ball and dribbled down the clock before taking the game-winning shot above the arc. The ball banked in as the crowd at Haas Pavilion erupted.