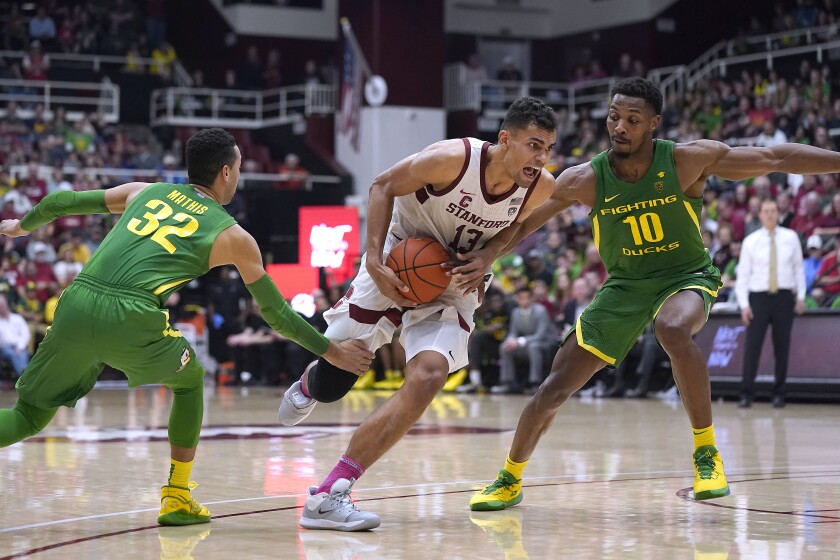 Oscar da Silva handled a lot of the scoring for Stanford. Everyone on the court contributed on defense.

Da Silva had a career-high 27 points and added 15 rebounds, helping the Cardinal rally in the second half to beat No. 11 Oregon 70-60 on Saturday in Palo Alto.

“The energy was right from the start,” said da Silva, who had 17 points and 11 rebounds after the break. “It felt really, really good.”

“I was 0 for 3 before that, but coach said to stay confident,” Terry said. “I knew I had the ability make big shots.”

Terry finished with 12 points as Stanford ended a three-game skid.

“There were a variety of players who made big plays,” Stanford coach Jerod Haase said. “We defended for the whole game, and that gave us a chance.”

“They just got going on us, and we couldn’t rebound the ball,” Oregon coach Dana Altman said. “Our energy level wasn’t good. Rebounding and defense in the second half hurt us.”

Andre Kelly had 14 points and six rebounds and Paris Austin scored 11 points for California. The Golden Bears had lost three of their previous four before holding off the Beavers.

Oregon State missed three chances to go ahead after Bradley missed the front end of a one-and-one.

Ethan Thompson had his shot blocked by Kelly, but the Beavers grabbed the loose ball. Tres Tinkle was then called for charging.

Bradley missed another free throw with 3.9 seconds left, then made the second to put California up by two.

Thompson slipped in the backcourt after taking the ensuing inbounds pass but got the ball to Zach Reichle, who threw up a heave that hit the backboard as time expired.

Arizona State stayed in the middle of the conference race by rebounding from its last-second loss at Washington State earlier in the week. Martin led the Sun Devils on a night when most of the scoring seemed to come from the free-throw line.

The teams combined for 49 fouls and shot a combined 68 free throws. Arizona State was 27 for 33 at the free-throw line, including 21 for 25 in the second half.

Washington lost its fifth straight in a season that has been defined by close losses. Marcus Tsohonis led the Huskies with 19 points.

Gettings shot eight for 13 from the field and had 12 rebounds for his first double-double of the season. The senior, who averages 5.6 points per game, transferred to Arizona after three years at Cornell.

It was the eight consecutive win for Arizona in Pullman. Isaac Bonton had 15 points to lead the Cougars.