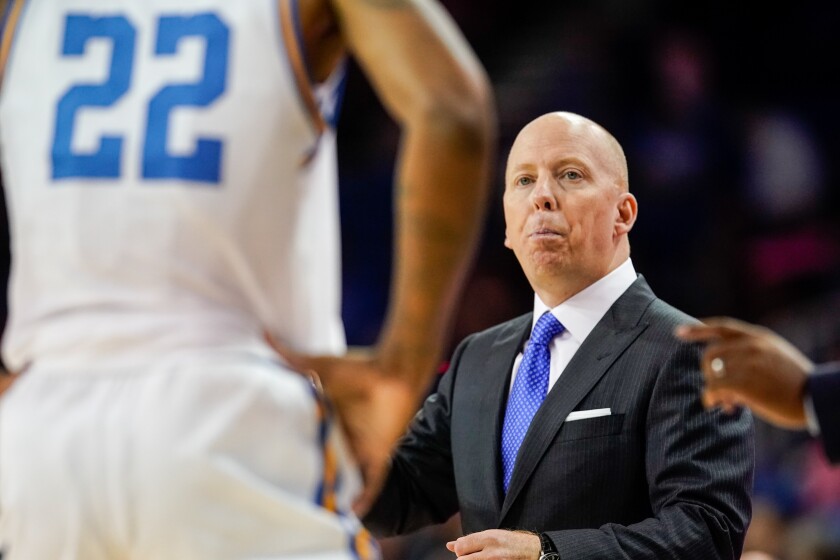 UCLA coach Mick Cronin was reprimanded by the Pac-12 Conference on Monday for postgame comments critical of the officiating during the Bruins’ 74-64 loss to North Carolina on Saturday at the CBS Sports Classic in Las Vegas.

“The Pac-12 membership has established rules that prohibit our coaches from publicly commenting about officiating,” commissioner Larry Scott said in a statement. “We have an obligation to our members to enforce approved conference rules. As a part of our officiating program, there is a protocol in place for our coaches to provide feedback directly to the coordinator of officials.”

Cronin called the officiating a tale of two halves, noting there were 13 fouls called in the first half and 32 in the second.

“In defense of my players, I thought that the officials took the first half off,” Cronin said, referring to Terry Wymer, Keith Kimble and Roger Ayers. “ … North Carolina won, so don’t misconstrue what I’m saying. The game was officiated two separate halves. All you got to do is look at the fouls per half.”

Cronin intimated that his team suffered from a lack of calls while falling behind 36-23 at halftime.

Cronin also implied that his team did not benefit from the flurry of calls in the second half.

“I will say that we were in the bonus with 13 minutes left in the game,” Cronin said, “and never shot the bonus.”

Officials also overturned a foul that was initially assessed against North Carolina in the final minutes, calling it instead on UCLA forward Jalen Hill. The Bruins bench was then called for a technical foul for its reaction.

“The problem was the same foul happened in the first play of the game against Notre Dame and Jalen turned and it was a foul on Jalen,” Cronin said, referring to the Bruins’ loss to the Fighting Irish this month. “Now, North Carolina guy turns and elbows Jalen in the mouth and it’s a foul on Jalen. Just, as a coach, all you want is consistency.

“Again, you got to find ways to win games. I won 89 games my last three years and these same guys were all reffing. So you got to be tough enough to deal with it. Just right now, our guys, it threw them off.”