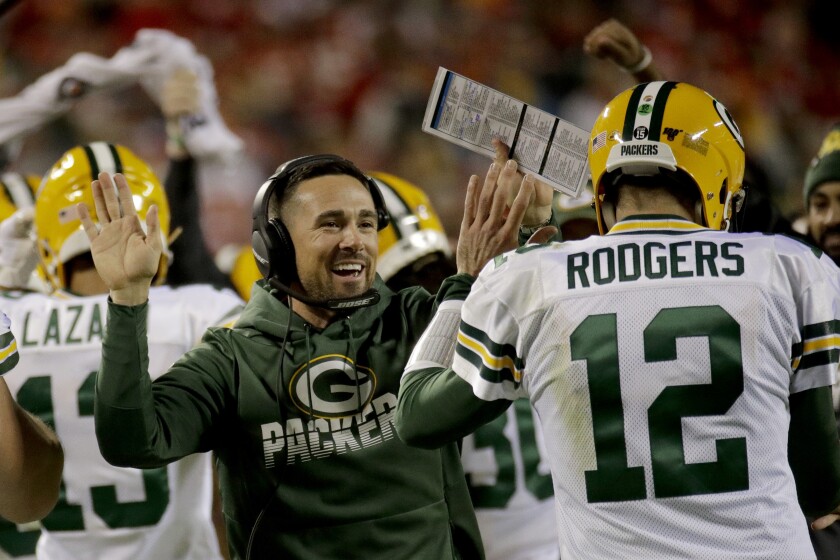 The two young coaches were friends, close like brothers.

So in 2017, when Rams first-year coach Sean McVay and then-offensive coordinator Matt LaFleur talked plays, strategy and game plans, the conversations sometimes got spirited, even heated.

The exchanges benefited both, said Greg Olson, quarterbacks coach on that staff.

“He showed he wasn’t afraid to speak his opinion,” Olson, now the Oakland Raiders offensive coordinator, said of LaFleur. “He wasn’t a ‘yes’ man. He was willing to tell Sean, ‘You can do it this way but …’

“It wasn’t always a rosy marriage — which is what you have to have sometimes.”

“True loyalty is having the strength to tell people what they need to hear, not what they want to hear,” he said. “You need that. ... Matt was always very comfortable. That’s just who he is.”

LaFleur is now the coach of the Green Bay Packers. On Sunday, when his team plays the San Francisco 49ers in the NFC championship game, he could become the sixth first-year coach in NFL history to guide his team to the Super Bowl, joining San Francisco’s George Seifert, the Baltimore Colts’ Don McCafferty, the Denver Broncos’ Red Miller, the Indianapolis Colts’ Jim Caldwell and the Oakland Raiders’ Bill Callahan. Seifert and McCafferty won.

LaFleur, 40, got his opportunity with the Packers after helping the Rams reach the playoffs in 2017, and then leaving in 2018 to become the Tennessee Titans’ offensive coordinator and play-caller.

LaFleur took over a Packers team that finished 6-9-1 in 2018 under former coach Mike McCarthy. With future Hall of Fame quarterback Aaron Rodgers, LaFleur has guided the Packers to a 13-3 record and a divisional-round playoff victory over the Seattle Seahawks.

That puts LaFleur on the brink of possibly leading his team to the Super Bowl a year after McVay achieved the feat with the Rams.

“He was huge part of establishing the foundation of what we wanted to be,” McVay said.

LaFleur will be pitted against 49ers coach Kyle Shanahan, a mentor for both he and McVay. Shanahan’s staff includes passing game coordinator Mike LaFleur, Matt’s younger brother. On Nov. 24, the 49ers defeated the Packers, 37-8.

LaFleur told reporters this week that the close relationships would not be a distraction.

“It’s just part of the business,” he said. “I think you get used to that and once the ball’s kicked off you’re not even thinking about that.”

LaFleur has been coaching in the NFL since 2008 but his season with the Rams, which included an NFC West title and the franchise’s first postseason appearance since 2004, played a major role in his ascent.

“He was the perfect thing for us — that we needed — that first year,” Rams quarterback Jared Goff said.

Then LaFleur and McVay worked on the Washington Redskins staff with Shanahan, who was the Redskins offensive coordinator from 2010 to 2013.

When Shanahan became the Atlanta Falcons offensive coordinator in 2015, LaFleur was hired as quarterbacks coach. The next season, they helped the Falcons reach the Super Bowl and quarterback Matt Ryan was voted the NFL’s most valuable player.

After the Super Bowl, Shanahan left to become coach of the 49ers, and the Falcons bypassed LaFleur and hired Steve Sarkisian as offensive coordinator. Shanahan, an experienced play-caller, set up his 49ers staff without a coordinator.

McVay, also a play-caller, hired LaFleur to be part of his first staff, giving Goff a triumvirate of quarterback expertise in McVay, LaFleur and Olson.

McVay possesses “savant-type intelligence,” Olson said, but he leaned on LaFleur to help with the installation of the offense and game plans.

LaFleur also acted as “go-between” for Goff and McVay, the quarterback said.

“In that first year, when I was still learning the offense,” Goff said, “I could ask him some dumb questions and you wouldn’t feel stupid about it.”

On the field, Goff said, LaFleur pushed him. If he completed a pass, what could he have done to be quicker? How could he have moved better in the pocket? What if the ball was delivered farther in front of, and perhaps to the left of, a receiver?

“He made me such a better player challenging me in that way and really showing me what I’m capable of in certain instances,” said Goff, who earned the first of consecutive Pro Bowl selections in 2017.

After the season, LaFleur interviewed to become head coach of the Titans. Mike Vrabel got the job and hired LaFleur to be the offensive coordinator and play-caller.

Dan Orlovsky, an NFL quarterback for 12 seasons, met LaFleur in 2009 when he played for the Texans. Orlovsky was in training camp with the Rams in 2017, and now works as an analyst for ESPN. He could see LaFleur’s maturity during his 2017 stint with the Rams. He said LaFleur’s ability to dissect game tape and design a game plan was never going to be an issue with the Packers.

“He’s becoming more of a play-caller, and the play-calling depends on flow of the game and feeling all that stuff,” Orlovsky said. “That’s the biggest area I’ve seen him grow.”

Now LaFleur has the Packers playing for a chance to return to the Super Bowl for the first time since the 2010 season.

The Rams will be watching.

“He’s a great coach,” McVay said, “and I’m not surprised by what he’s doing.”