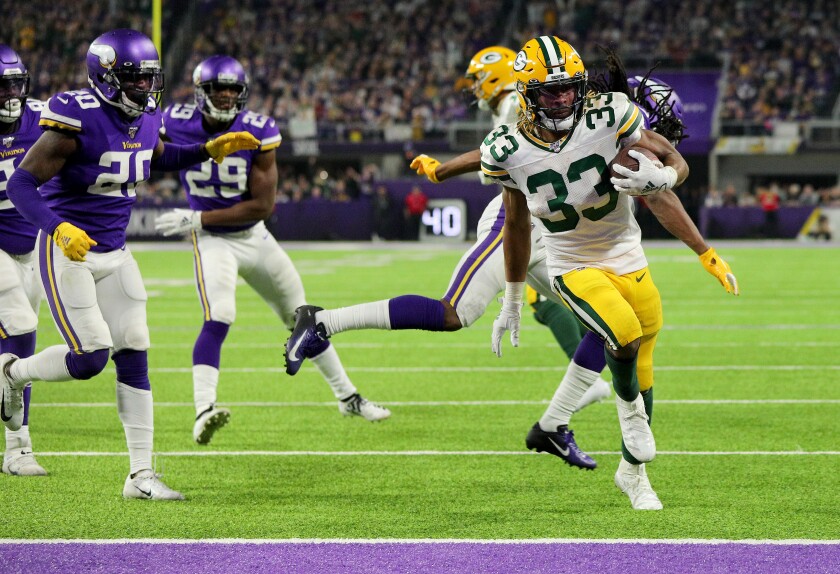 Aaron Jones rushed for 154 yards and two second-half touchdowns, Za’Darius Smith had five tackles for loss to lead a stifling performance by Green Bay’s defense, and the Packers became NFC North champions by beating the Minnesota Vikings 23-10 on Monday night.

The Packers (12-3) made Matt LaFleur the 10th rookie coach in NFL history to reach 12 victories, winning for the first time in four tries at Minnesota’s deafening U.S. Bank Stadium with a dominant finish after trailing 10-9 at halftime. Green Bay stayed in position for a first-round bye in the playoffs. The top seed and home-field advantage until the Super Bowl is still in sight.

The Packers stormed back from three first-half turnovers, including a rare interception by Aaron Rodgers, to silence the crowd and seal the Vikings (10-5) into the sixth playoff seed. The green-and-gold-clad fans in attendance squeezed some “Go, Pack, Go!” chants in during the ample down time as the Packers took control in the second half.

Kirk Cousins was sacked five times, with a whopping 3 1/2 by Smith, and he threw an interception in the third quarter that set up the first score by Jones. Cousins fell to 0-9 in his career in Monday night games.

The Vikings had only seven first downs and never netted a drive longer than 31 yards in this concerning regression. They wasted a fine performance by their defense, which has produced 10 turnovers in the last two games.

Minnesota’s frustration over a stalled offense that averaged nearly 30 points over the previous 10 games only increased in the second half. Stefon Diggs caught a 28-yard pass on third-and-18 in the third quarter, but Cousins was intercepted later on the drive when Diggs was tangled up with Jaire Alexander and Kevin King made a leaping grab before a 39-yard return.

That set up the first score by Jones, who leads the league with 16 rushing touchdowns. The Vikings punted on fourth-and-1 from their 45 to white-flag their ensuing possession.

Cousins cost Minnesota the completion of a comeback from a three-touchdown deficit at Green Bay on Sept. 15, when his second interception of the game came on an off-balance throw into end-zone coverage on first-and-goal late in the fourth quarter of a 21-16 defeat. Since that iffy first month of the season, though, Cousins has played as well as nearly any quarterback in the league. He helped the Vikings withstand the extended injury absence of star wide receiver Adam Thielen and lapses in their pass defense, clinching a spot in the playoffs for just the second time in five full seasons as a starter with two teams.

Packers defensive coordinator Mike Pettine again schemed awfully well against Cousins and the Vikings, keeping his outside linebackers extra wide to prevent the rollouts and screens that Cousins excels with. Third-string running back Mike Boone, in his first NFL start with Dalvin Cook and Alexander Mattison both out with injuries, was mostly bottled up.

Cousins was just 4 for 12 for 39 yards in the first half. The best throw from either side during the ugly first 30 minutes, though, was his back-shoulder drop in the end zone to Stefon Diggs to beat solo coverage from Jaire Alexander for a 21-yard touchdown. That came three plays after Anthony Harris picked off Rodgers by darting in front of Davante Adams for his sixth interception of the season.

Rodgers and the Packers have often raced out of the gates this season, hitting their snags later in games, but the start was awfully bumpy. Jones fumbled when Anthony Barr wrangled him down on a short catch at on the first drive, and Eric Kendricks returned it to the Green Bay 10-yard line. Adams lost a fumble and later dropped a pass in the end zone right before halftime, forcing the Packers to settle for Mason Crosby’s third field goal.

Rodgers threw 30 passes in the first half and gained just 158 yards off them. His streak of 277 consecutive attempts without an interception was the longest in the league this season, dating to the Oct. 14 game against Detroit.