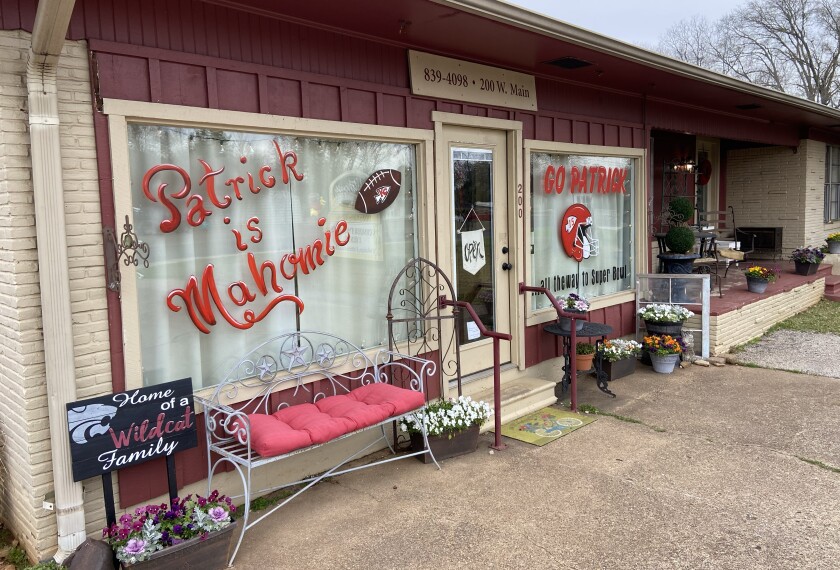 This tiny town has done what NFL defenses have been trying to do for the past two years. It has wrapped its arms tightly around Patrick Mahomes.

The Kansas City Chiefs flags snap in the East Texas wind here, the place where Mahomes first learned to play quarterback. They’re raised high over homes and businesses, along with painted windows that read “Patrick is Mahomie” and “Bel15ve,” cleverly incorporating the jersey number of the sensational player who has led the Chiefs to their first Super Bowl in 50 years.

At Big Chief Outfitters — the name is purely coincidental — owner Chris Hollenshead designed 250 red T-shirts with a white-and-gold Mahomes’ 15 printed on front and back. He pre-sold the entire run of 250.

“If I would have had 1,000, I probably would have sold them too,” Hollenshead said.

This community of roughly 8,000 people, a three-hour drive east of Dallas, would typically be Cowboys or Houston Texans country. But these days it’s all about the Chiefs.

“We’ve embraced him. He’s our own. That’s the way we see it,” said Adam Cook, who was Mahomes’ head coach at Whitehouse High. He’s now the school’s athletic director. “You see on Facebook people are starting to call Whitehouse “Kansas City South.”

And that makes sense, even to some true Texans, seeing as the Chiefs began as the Dallas Texans before Lamar Hunt moved the franchise to Kansas City in 1963.

“Our football coach now saw a picture from the Chiefs game last year, when they’re wearing their throwbacks and they’ve got a big state of Texas on the side of their helmets,” Cook said. “When you start to learn the history of how they actually came out of Dallas, he sent me something that said, ‘Hey, we can root for these boys.’ ”

Technically, Mahomes is from the neighboring city of Tyler, which produced Hall of Fame running back Earl Campbell, along with quarterback Johnny Manziel, whose unfortunate career trajectory diverges sharply from that of Mahomes.

According to the NFL Players Assn., Mahomes currently has the NFL’s top-selling jersey, bumping that of Tom Brady. The New England quarterback has made 17 consecutive appearances among the top three since the Top 50 list was introduced in 2014.

The Friday before the Chiefs played host to the Tennessee Titans in the AFC championship game, there was a wear-your-jersey day at Whitehouse schools, and every campus was filled with Mahomes 15s. Those students and teachers will paint the town red again Friday, two days before Super Bowl LIV in Miami.

“Patrick was just a natural leader,” said Duane Barber, former principal at Whitehouse High and now an assistant superintendent for the district. “He was polite and respectful, always nice to everyone in the halls, no matter who they were.”

Mahomes went on to star at Texas Tech, where in three seasons as the starting quarterback he saw his touchdown numbers increase every year, from 16 to 36 to 41.

“Pat Sr. was like the greatest athlete to come out of East Texas,” former Texas Tech — and current Arizona Cardinals — coach Kliff Kingsbury recalled of Mahomes’ father, who is from Lindale, Texas, and pitched in the major leagues from 1992-2003.

“So that was the first time I heard of Patrick, was because of his dad. I remember watching his junior tape and he was a great athlete, could move around and make plays, really raw-type player.

“I kind of stored it away, and as soon as I got to Texas Tech, went out there and I got to meet him, met coach Cook. I just kind of fell in love with the kind of person [Mahomes] was. Really magnetic kid.”

Mahomes threw for a record 734 yards in a game against Oklahoma in 2016, breaking another record with his 819 all-purpose yards in that game.

“I’m not an expert, don’t get me wrong, but I know football pretty much,” his mother, Randi, told The Times in 2018. “My boss was talking about it, saying, ‘Gosh, this is so exciting. You know, in the NFL, they don’t just throw six touchdowns in a game.’ And I was like, ‘But Patrick’s always done that.’ ”

That boss was correct, of course. Mahomes only threw five touchdown passes in Kansas City’s stunning back-from-the-dead AFC divisional victory over Houston, but a record four of them came in the second quarter. The Chiefs fell behind, 24-0, in that game before roaring back and outscoring the Texans, 51-7, the rest of the way for a 51-31 win.

And then there’s the play that will live forever in the Chiefs’ all-time highlight package, the 27-yard, tight-rope-along-the-sideline touchdown run by Mahomes in the AFC title game. He eluded multiple Tennessee defenders, leaving them diving in his wake, before twisting his way across the goal line.

Cook was at home in Texas, watching the game with his brother, Brad, the high school’s former offensive coordinator. Instantly, Mahomes’ days as a Whitehouse Wildcat came to mind, and a playoff game against Arlington Seguin.

It was fourth-and-eight with less than a minute to play when Mahomes looked off a running back who was covered running up the sideline, tucked the ball, and took off. The quarterback didn’t stop until he reached the end zone.

“Just the determination that he had,” Adam Cook recalled, shaking his head at the memory. “It was almost that moment on the field where he made up his mind, '`I’m making a touchdown. They’re not going to stop me.’ He actually ran over a couple guys.”

No one, not even his most ardent supporters in Whitehouse, could have guessed that same determination would take him this far.