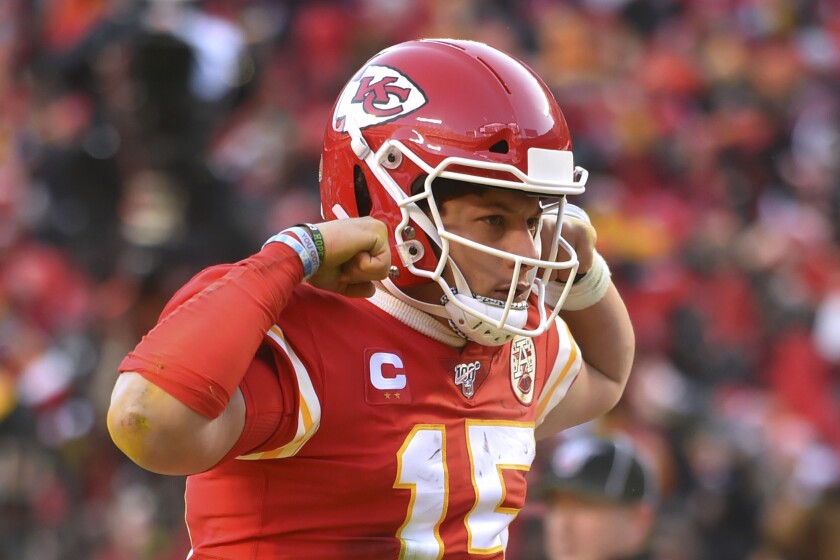 Fifty years after their only Super Bowl victory, the Kansas City Chiefs are headed back.

Led by the phenomenal play of quarterback Patrick Mahomes, and a defense that hardened like ice, the Chiefs secured their spot in Super Bowl LIV on Sunday with a 35-24 victory over the Tennessee Titans in the AFC Championship Game at a frigid-but-rollicking Arrowhead Stadium.

The temperature at kickoff Sunday was 17 degrees, with a wind chill of 5.

The Chiefs lifted the Lamar Hunt Trophy — named for their founder — and now are in the hunt for the Lombardi. They will play the winner of Sunday’s late game, Green Bay at San Francisco, Feb. 2 in Miami on the NFL’s biggest stage.

Chiefs coach Andy Reid is 0-1 in the Super Bowl, with his Philadelphia Eagles losing to New England 15 years ago.

The same team that fell behind, 24-0, to Houston last week before a devastating scoring spree, fell behind again in the AFC title game. Twice in the first half, Tennessee led by 10.

But by the end of the first half, Mahomes seized control with an unforgettable moment.

The signature play of the game — and maybe the Chiefs’ season — came with 23 seconds remaining in the half and Kansas City trailing, 17-14.

Mahomes took a shotgun snap, dropped back to the 35 and surveyed his options. He didn’t see anyone open so he darted left and began a run that could lead the club’s all-time highlight video. Linebacker Derick Roberson made a futile dive at his feet at the 32, then the quarterback twisted away from linebacker Rashaan Evans at the 29.

Dashing up the sideline, with his left foot coming within three inches of the chalk boundary, Mahomes did a tight-rope act to stay inbounds. At the 10, he veered to his right, spun away from a strip attempt by cornerback Tramaine Brock at the five, and plunged into the end zone under a last-gasp tackle attempt by defensive end Matt Dickerson.

The Chiefs had their first lead, and Arrowhead erupted. Even fellow Chiefs seemed stunned by the playmaking ability of Mahomes, with receiver Demarcus Robinson waving his arms at him as if fanning a fire.

For the second consecutive week, the Chiefs found themselves in a hole early. With a steady diet of carries by Henry, the Titans built a 10-0 lead in the first quarter — Henry turning a direct snap into a four-yard touchdown run — then pushed that to 17-7 on a trick play. Tannehill threw a one-yard scoring pass to 6-foot-8 reserve tackle Dennis Kelly, who had lined up at fullback.

The Chiefs stayed in the game with a pair of touchdown passes to the blistering-fast Tyreek Hill, first on a jet sweep (ruled a pass) that covered eight yards, then a 20-yard strike down the seam.