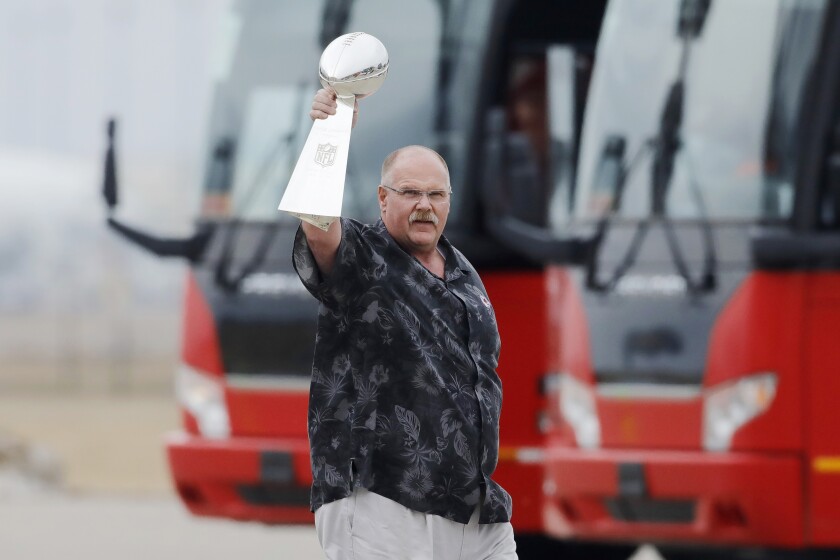 Seattle had the Beast Quake, and now Kansas City can claim the Mahomes Monsoon.

Kansas City sent so many fireworks into the sky when the Chiefs were on their way to winning Super Bowl LIV that the pyrotechnics simulated a storm. The National Weather Service tweeted radar images captured when the NFL franchise won its first Super Bowl in 50 years. Thousands of bright green pinpricks lit the otherwise black images.

For the Chiefs themselves, the party raged through the night.

At the traditional Super Bowl most-valuable-player news conference Monday, Kansas City coach Andy Reid wore a Hawaiian shirt and a wry smile. He didn’t do what some winning coaches and players had done in years past, taking the Lombardi Trophy back to their hotel room.

“I didn’t really sleep last night,” he said, “but I didn’t spend it with the trophy …”

He quickly caught himself.

“Well, I did. I spent it with my trophy wife, how’s that?” he said, drawing laughter and applause from the bleary-eyed media, NFL personnel and guests assembled in a ballroom of the league hotel. Then, a peek at the team’s postgame party. “I listened to Pitbull is what I did. He was unbelievable. He’s got great endurance, man, I’ll tell ya.”

The true entertainer Sunday night was Chiefs quarterback Patrick Mahomes, named Super Bowl MVP even though his performance was far from flawless. He had the steady hand down the stretch to lead the Chiefs to victory, orchestrating the team’s third consecutive postseason comeback.

In the AFC divisional round against Houston, the Chiefs rallied from a 24-0 deficit against the Houston Texans. Then, in the conference championship game against Tennessee, Kansas City dug its way out of a 10-point hole. And again, on the biggest stage against San Francisco, the Chiefs fell behind by 10 before outscoring the 49ers, 21-0, in the final 6:13.

“We have explosive players,” Reid said. “We’ve got guys that trust each other, that’s the biggest thing. Where you’re down by 24 points and you don’t collapse as a team, mentally. They keep firing. And then the defense rallies. Then special teams rally. Somewhere along the line, each group has had that opportunity to change a game …

“With Pat and the receivers, his guys, you know that you’re never out of it.”

Said Mahomes, who at 24 years and 138 days is the youngest quarterback to be named Super Bowl MVP: “We’ve built a brotherhood with this team, I think that’s the biggest thing. You can see it in how we play, and how we support each other.”

That extends beyond the team. At least three teammates from his high school in Whitehouse, Texas, attended the Super Bowl, as did Adam Cook, his former coach at Whitehouse High. Last week, after a reporter informed Arizona Cardinals coach Kliff Kingsbury that Cook did not have a ticket to the game, he bought one for Cook. Kingsbury recruited Mahomes out of Whitehouse and coached him at Texas Tech.

“Now with coach Reid, knowing the right time to kind of rein me in, but that the same time letting me be who I am. I think that having all those coaches that supported me and let me be who I am has helped me get to where I’m at today.”

Cook, who attended the morning news conference with his wife, Julie, downplayed his role in the development of the star quarterback.

“People say, ‘Man, you did a good job. You helped him get here,’ ” Cook said. “I say, ‘Nah, I didn’t do any of that. I just got to stand on the sideline and watch him do this stuff a little bit earlier than y’all did. I’ve been watching this for a while.’ ”