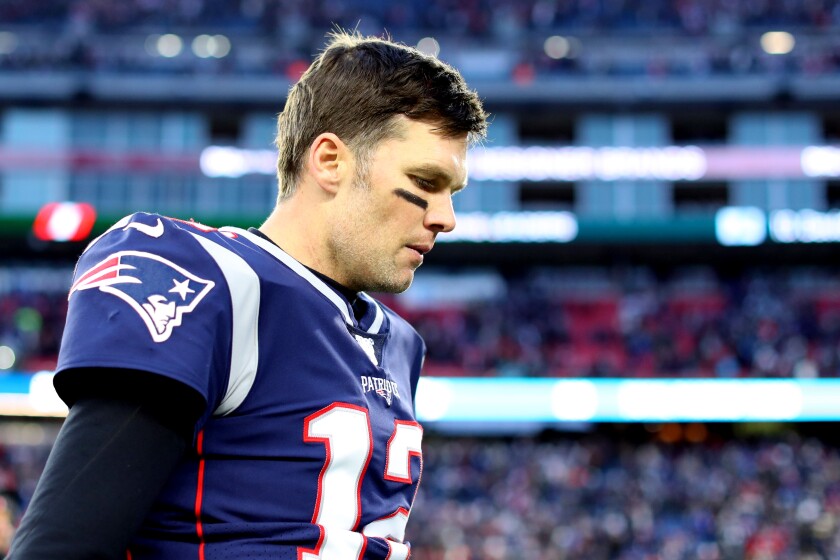 In the NFL world that spins in unpredictable directions from week to week, emotional overreactions lead to the biggest mistakes made by the betting public. A popular prediction this week will be the end of an era for Tom Brady and the Patriots.

Still, after New England’s late-season slide and its stunning loss to the Dolphins on Sunday, is doomsday actually the right reaction?

“We’re going to have to adjust how we think about this football team because the Patriots are not the same,” said Michael Lombardi, a VSiN analyst and former NFL executive who worked as an assistant to Bill Belichick’s coaching staff from 2014 to 2016.

William Hill sportsbooks closed the Patriots as 17-point favorites in their 27-24 loss to Miami, the biggest upset in the league this season and the largest point-spread loss of Brady’s career.

It took a “Fitzmagic” act to knock New England to the wild-card round of the playoffs for the first time since 2009. Brady threw a pick-six in a game that Dolphins quarterback Ryan Fitzpatrick finished with a touchdown pass in the final minute.

“I was really shocked,” Lombardi said. “The best quarterback on the field was Fitzpatrick. New England looked slow on defense.”

The Titans are 7-3 since Dolphins castoff Ryan Tannehill took over as starting quarterback, and Tannehill will be handing the ball off to NFL rushing champion Derrick Henry.

“Tannehill is much better than Fitzpatrick,” Lombardi said. “I think it’s going to be a really hard game for the Patriots.”

The road to the Super Bowl will be even more difficult. If seeds hold in the AFC, the Patriots would have to go to Kansas City in the divisional round and, if they advance, to Baltimore for the conference championship game. That means Brady might have to beat Tannehill, Patrick Mahomes and Lamar Jackson in consecutive weeks.

“I know I took some shots at Brady this season, but Brady is just not the same guy,” Westgate SuperBook director John Murray said. “Right now, Tannehill is the better player.

“It’s famous last words, but I just can’t believe the Patriots can win in Kansas City and Baltimore. I don’t think it’s a slam dunk that they get past Tennessee. It is hard to write them off, but this road ahead of them is too tough.”

The SuperBook dropped the Patriots, who have played in eight straight AFC title games, to 20/1 odds to win the Super Bowl.

In this weekend’s postseason opener, Houston is a three-point home favorite over Buffalo, which will put heat on Deshaun Watson with the league’s No. 2 scoring defense (16.2 points per game).

“I think I like the Bills here,” Lombardi said. “The Bills are going to be tough out.”

The NFC playoff puzzle was completed Sunday night in Seattle, where the Seahawks finished inches short of an upset in a 26-21 loss to the 49ers. It was a dramatic result that earned San Francisco the No. 1 seed and knocked Green Bay to No. 2 and New Orleans to No. 3.

The Saints are eight-point home favorites in the wild-card round against the Vikings, whose quarterback, Kirk Cousins, has never won a playoff game. It will be his first playoff start with Minnesota.

Russell Wilson and the Seahawks hit the road to Philadelphia for a rematch. Seattle was a 1½-point road favorite in a 17-9 victory over the Eagles on Nov. 24.

Carson Wentz and the Eagles defeated the Giants in Week 17 — and ended the Pat Shurmur era in New York — to win the NFC East. The Seahawks, 7-1 on the road this season, are 2-point favorites in Sunday’s nightcap.

“I never go against Russell Wilson,” Lombardi said, “but it’s hard to beat a team two times and I favor Philadelphia.”

— The Dolphins, outscored 102-10 in the first two weeks of the season in losses to Baltimore and New England, started 0-7 and were widely accused of tanking for the No. 1 draft pick. Miami finished 5-11 to go over its season win total of 4½, a stunning win for bookmakers who took an avalanche of action under that number in the offseason.

“Who would have ever believed the Dolphins would go over their win total? It’s unbelievable,” Murray said. “It’s one of the biggest upsets I can remember in the NFL.”

— Both teams in Los Angeles were flops. A season after reaching the Super Bowl, the Rams (9-7) went under their season win total of 10½. With a win total of 9½, the Chargers (5-11) were bigger underachievers in the likely end of the Philip Rivers era.

Lombardi is not predicting the demise of coach Anthony Lynn.

“He’s not going to get fired,” Lombardi said. “I think Lynn’s safe.”