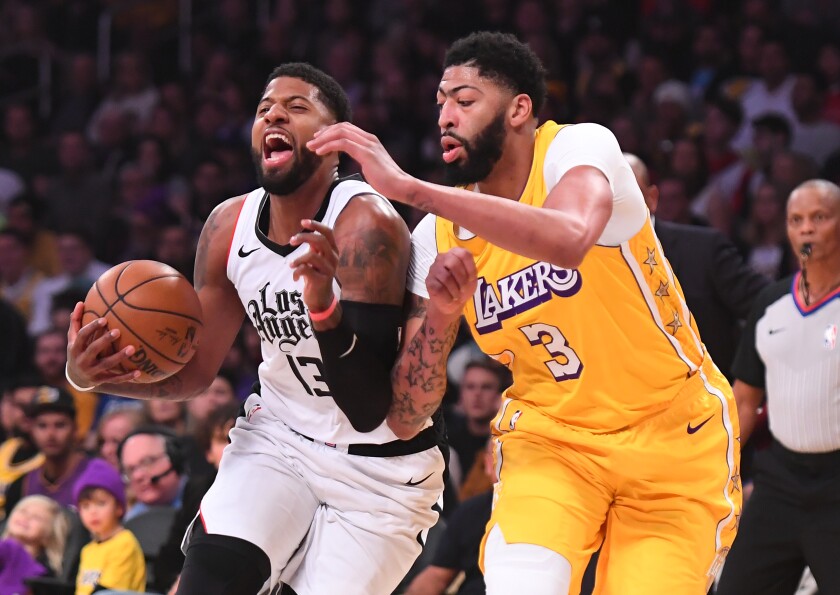 After sitting down for his postgame interview Saturday night at Staples Center, Paul George mentioned he’d just gone through “a lot of clips” of his recent play. It could not have been an easy watch.

The analysis was helpful, if hard. Because when it was over, George said he’d spotted a trend.

“A lot of the plays I had last year before the injury started, was through contact and finishing through defenders,” said George, and MVP candidate a year ago in Oklahoma City before suffering injuries to both shoulders that required offseason surgery. “This year I’ve been shying away from the contact. So it’s just getting it through my head that I’m fine with the physicality.”

By that measure, he took his performance during Tuesday’s 105-87 win in Sacramento as progress even as he missed his first six shots, rebounded by scoring nine points in a flurry during his first six minutes of the second quarter, and finished with 21 points on six-of-25 shooting, including three of 14 on three-pointers.

“But tonight I felt good, I felt comfortable. I was getting to good spots within the game and that’s all I can be happy about.”

Losing offensive efficiency from a scorer of George’s caliber might suggest that a loss would follow for his team, too, and yet the Clippers are 8-3 when he shoots 40% or worse, a sign of the depth around him. Tuesday’s win was another example.

Kawhi Leonard made eight of his 21 shots, including one of his seven three-pointers, and reserve center Montrezl Harrell, one of the NBA’s most efficient scorers, made two of his nine shots. Though Leonard, George and Harrell combined to shoot 29%, the rest of the roster shot 60%, making 20 of their 33 combined shots.

“I thought they stepped up when we needed them the most,” George said.

Said Leonard: “That’s what championship teams are about. Going through playoff runs, best player isn’t going to play great some nights. It might be somebody off the bench or somebody starting that has a big game and propels us to win the game.

“We just have to keep learning from these experiences and keep getting better and know that in the back of our minds we all can win a basketball game.”

George and Leonard were critical to the victory in other ways. Their defense helped limit the Kings to 17 or fewer points in both the second and fourth quarters. George guarded Sacramento’s Buddy Hield, Trevor Ariza, Nemanja Bjelica and De’Aaron Fox most often, and allowed them to make one of their combined eight shots over 39 combined possessions, according to the NBA player tracking data.

The Leonard-George duo also combined for 16 of their team’s 21 assists, with George’s nine a season-high.

“They were putting an extra body in front of us and when that happens we’ve got to pass the ball, trust teammates and create a chain reaction from there,” Leonard said.

Clippers coach Doc Rivers has long maintained that he does not worry when players with long track records of making shots are in a slump. With George, specifically, Rivers called plays to “get him going” early in the game but was pleased when the forward did not force his shots within the offense.

“We just run our stuff and when [George] is open, he’s open,” coach Doc Rivers said. When he’s not, he moves the ball. Paul, he’s a big focal point for the other team’s defense. You can see that. Shooting scares teams. There’s no doubt about that. Where PG has been able to get is when he doesn’t have it, he moves it and gets somebody else a shot. And we’ll take that.”

Up next for the Clippers: Thursday vs. Detroit Pistons

Update: The Clippers begin a four-game homestand by facing the Pistons and Blake Griffin, the former All-Star forward with the Clippers. Griffin missed the Pistons’ 23-point loss to Utah on Monday with left knee soreness. For the season he is averaging 15.5 points and 4.7 rebounds while shooting 35%, with every mark a career low. Detroit (12-22) has lost seven of its last eight games. … Clippers forward Kawhi Leonard said it was a “great honor” to be named the AP’s male athlete of the year for 2019. “Growing up you don’t know too much about it but as I got older, college, high school, being a rookie in the NBA, you see how significant the honor is,” he said Tuesday. “It just shows me that hard work paid off.”