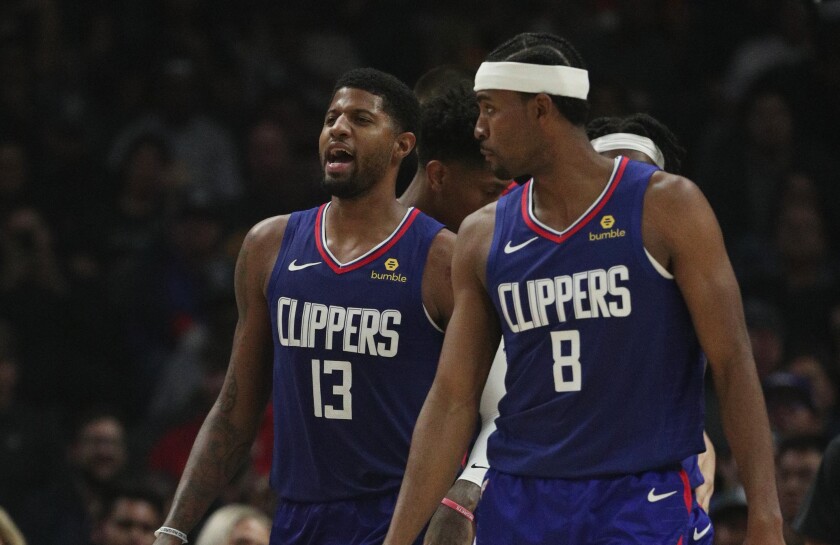 The debut of the Clippers’ superstar duo never materialized Saturday.

Instead, fans saw a one-man show.

With Kawhi Leonard absent for his fourth game of the season, Paul George turned in a historic performance in his first home game as a Clipper, scoring 37 points in 20 minutes in his team’s 150-101 victory over Atlanta at Staples Center.

It ended a two-game losing streak and provided further evidence that George, who hadn’t played in 207 days until he scored 33 points in 24 minutes during his season debut Thursday, is already far along in his progression back to the court after offseason surgery on both shoulders. George called Thursday’s performance “terrible,” in part because it occurred during a loss in New Orleans.

No player in NBA history has scored more points in less than 21 minutes. And no Clippers victory has ever come by a larger margin.

“I could get used to this,” George said in a postgame television interview.

When George went to the bench with 8:07 remaining in the third quarter, he’d already scored 34 points in his first 18 minutes. The Clippers (8-5) were already leading by double digits and there was no need for an encore. During two free-throw attempts midway through the second quarter, fans chanted “6-6-1!” — the number for the area code of Palmdale, where George grew up.

But then, during the break between the third and fourth quarters, George wiped his shiny, silver sneakers on a traction pad at the scorer’s table and returned to the court.

Within 18 seconds, George caught a pass from JaMychal Green and drilled a three-pointer from 28 feet, and as he jogged backward on defense, he shrugged while rapper Quavo cheered from a courtside seat. Four possessions later, he provided an emphatic coda on his first home game as a Clipper when he sprinted ahead of Atlanta’s defense in transition and bounced a pass off the backboard that was caught and dunked by teammate Montrezl Harrell.

When George finally checked out for good shortly thereafter, Hall of Famer Jerry West, a Clippers advisor, was among the fans who rose to applaud.

“It may be rare as far as him not doing it in 20 minutes,” said Patrick Patterson, who knows George’s game well, having played with him since 2017. “But his ability to go out and dominate, to take over a game, score at will, play solid defensively, attack, hit tough shots, hit open shots, get everyone involved, that’s just who he is.”

Defensively, George was caught on a screen and crossed over and scored on — all during a short stretch in the second quarter. That was not surprising for coach Doc Rivers, who called defense one of the toughest things for players to recover after a long layoff.

What did stun the coach was what he called George’s mastery of the offense’s nuances, such as a play when George ran back for a handoff rather than curl around a screen because he’d seen his defender had given him too much space.

“He’s taking advantage of our offense like he’s been playing the offense for five years,” Rivers said. “He did three or four things tonight that you can’t know how to do it, in what we’re running, unless you’ve been running it. Even Lou [Williams] said it once, ‘Wow, that’s tricky.’”

Williams added 25 points off the bench and Jerome Robinson scored a career-high 21 points.

Leonard did not play because of a left knee contusion suffered Wednesday after knocking knees against Houston — a different injury than the ongoing tendon issue in the same knee that has been the basis for his three previous absences this season. Rivers said he was not concerned about the contusion being anything more than a “day-to-day” injury.

Leonard and George have yet to play in the same lineup even in practice. Asked whether George and Leonard would play together Monday, against Oklahoma City, for the first time, Rivers initially said he didn’t know but added, “most likely.”

Starting guard Patrick Beverley missed his second consecutive game, as well, with an injured left calf, and another starting guard, Landry Shamet watched in street clothes with the help of a crutch, the result of a sprained ankle he suffered four days before.

While the Clippers’ star went off, the Hawks’ struggled.

Trae Young was called “amazing” by Rivers before tipoff for a sophomore season that has seen the 6-foot-1 guard average huge numbers — 27.3 points and 9.1 assists, including 32 points and 11.5 assists in his last four entering Saturday.

By halftime, however, Young had made only two of his first 11 field goals and he finished with 20 points on four-of-16 shooting, with six assists and five rebounds. Atlanta (4-8) never recovered without Young’s production. He couldn’t find the room to operate.

George had no such trouble, however.

“I think he knows I have him on a time limit,” Rivers said, “and he’s trying to get them all in.”

Asked about the key to his scoring in bunches so far, George offered a deadpan response.