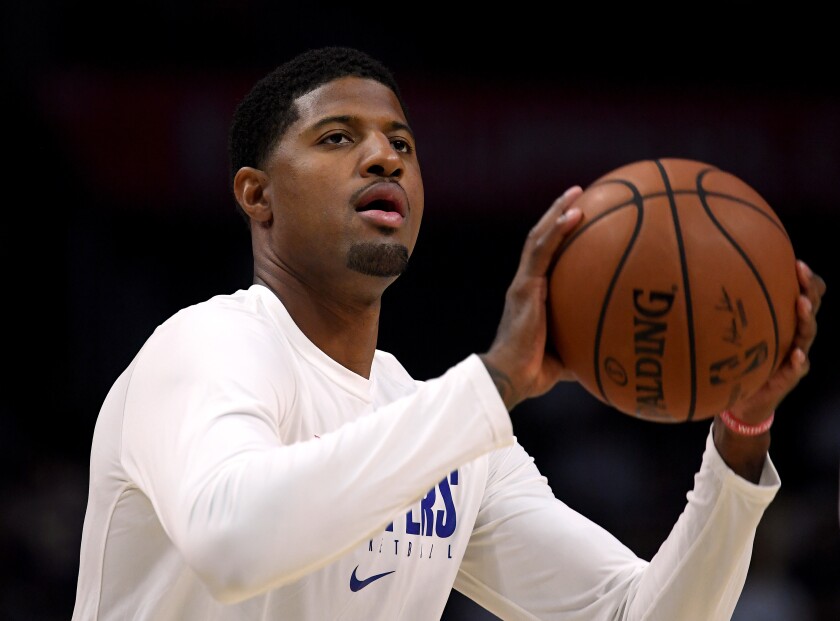 Though the Clippers won’t commit to an official timetable for Paul George’s debut, the six-time All-Star took part in a full-court, three-on-three scrimmage for about 20 minutes Saturday after the team’s practice, a signal that his workload is ramping up.

The team remains hazy on a date for a potential return as it monitors George’s recovery from offseason surgeries to both shoulders and Clippers coach Doc Rivers offered no update Saturday.

“At some point, someone’s going to tell me who can play,” he said. “I’ve never really gotten involved in it.”

There are expectations George will be ready to join the lineup by the end of the month. Based on Rivers’ previous comments, George could return sooner than that.

Asked after an Oct. 12 practice how long it can take for a team to jell, Rivers said that “Paul George is not going to be here for the first 10 [games], so that’s going to be a little harder to do.”

Asked Wednesday how he evaluates the team given the flux of the roster, Rivers again referenced the 10-game mark.

“We’re just trying to get through the first 10, get everybody healthy, and then we start looking at our team,” he said. “Right now we’re in the win-each-game mode until we get right.”

The Clippers host Toronto on Nov. 11 in their 10th game before leaving for a road trip when they will play Houston and New Orleans on back-to-back nights, Nov. 13 and 14.

When George was acquired in July as part of a trade with Oklahoma City, the team understood he would not be ready for the season’s start because of his recovery.

Ever since, the 6-foot-9, 220-pound George’s usual practice regimen has included working off to the side with one-on-one games against coaches while teammates take part in full-contact drills. George worked out in a modified three-on-three format two weeks ago, too, during an open practice, but didn’t run full-court to the degree he did Saturday, when he played alongside rookies Terance Mann and Mfiondu Kabengele, Rodney McGruder, Jerome Robinson and a staffer.

Rivers, a noted Chicago Bears fan, sounded like a defensive coordinator last week when he compared pressuring an opponent attempting a pass to a defensive end rushing a quarterback.

“When you blitz and put pressure on him, then the passing is inaccurate,” Rivers said. “We use that same belief in basketball.”

The Clippers have done a better job this season of not only making their defense felt by passers, but their intended receivers, too. The Clippers have averaged 16.2 deflections per game, which rank 12th across the NBA. But consider that through the season’s first month last year, the Clippers averaged only 9.9 deflections. They eventually averaged 12.6 for the entire season.

“We had really good defenders last year, but we have better defenders this year plus the length factor,” Rivers said. “And that’s with Paul not on the floor yet.”

Patrick Beverley’s 23 deflections are one off the league high owned by Detroit’s Andre Drummond, while Clippers teammates Kawhi Leonard and Maurice Harkless both have 18 deflections so far.

Having already established himself as one of the league’s most effective scorers close to the basket, backup center Montrezl Harrell spent his offseason attempting hundreds of mid-range jump shots to diversify his arsenal, and his increased comfort taking such shots has been evident ever since.

Contrast that with his start to last season. Harrell made none of his five attempts between five and 14 feet in October 2018. For the season, he made 37% of the 116 shots he attempted between five and nine feet.

Yet for all his improvement, Harrell’s bread-and-butter remains scoring inside the paint. Among the 77 players who have attempted at least 20 shots inside the restricted area this season, Harrell has the second-highest field goal percentage at 83%.

Update: The Clippers have started 3-0 at home for the first time in four seasons. Utah defeated the Clippers, 110-96, on Wednesday in Salt Lake City but Kawhi Leonard did not play in that game and the forward is expected to be available for Sunday’s matchup. The Jazz are coming off a loss Friday to the previously winless Sacramento Kings. Point guard Mike Conley scored 19 points in the loss, two days after scoring a season-high 29 against the Clippers. In the defeat to the Jazz, Clippers forward JaMychal Green made a career-high five three-pointers off the bench. Green has made 57.8% of his three-point attempts this season.