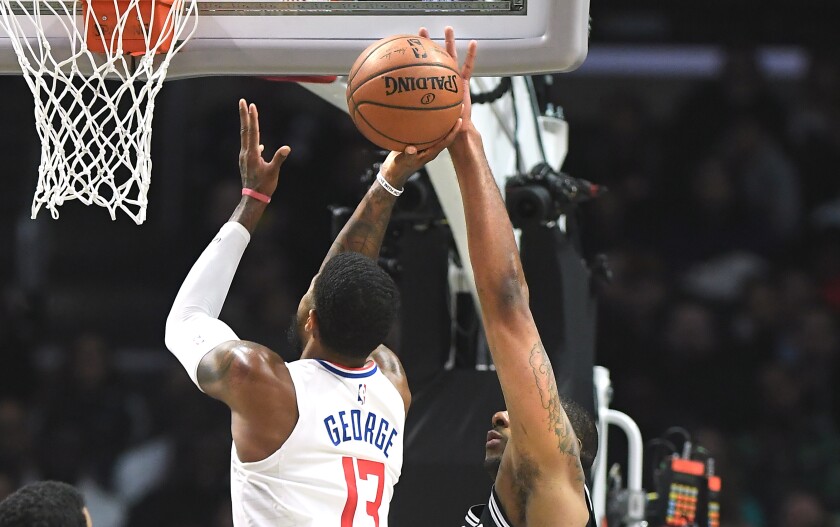 The Spurs, led by DeMar DeRozan, tried desperately to stop the bleeding.

Then it was Paul George’s turn.

As DeRozan drove into Staples Center’s paint and lofted a shot, the elbow of his non-shooting arm connected with George’s face violently. George crumpled. His nose had dislodged enough that a replay shown on the arena videoboard elicited gasps.

George had to be led off the court by a trainer because he could not see. His face was tilted upward, attempting to slow the bleeding, and his face was covered with a towel. George returned only minutes later to shoot two free throws assessed on the flagrant foul, with cotton balls stuffed up both nostrils, then headed back to the locker room. It was unclear whether he would return again.

George not only came back but also made two of the biggest plays. And on a night when the Clippers also took a beating early — down 15 in the first half — George’s clutch contributions led his team to emerge looking none the worse for wear, with a 108-105 victory.

George’s bounce pass with 1:35 remaining in the fourth quarter found Kawhi Leonard for a dunk and 104-102 lead. Then, with 20 seconds remaining, George isolated against the defense of Lonnie Walker before rising and firing a stepback jumper from 19 feet that swished for a four-point lead.

“That’s what he’s here for. He’s a big-shot maker and a big playmaker for this team. We expect a lot out of him and he did exactly that.”

George, who was hit in the eye only two days earlier against Minnesota before returning to close with a flurry, finished with 19 points, 12 rebounds and eight assists to improve the Clippers’ record to 35-15 — the franchise’s best mark through 50 games.

Coach Doc Rivers didn’t doubt George would return after enduring the blow. The forward told him his nose was “just bleeding.”

“We’re a hockey team,” River said with a dead-pan expression.

They’re also a team that can turn it on when needed.

San Antonio (22-27) made five of its first eight three-pointers to lead by as many as 12 in the first quarter and hold off the Clippers, who assisted on nine of their first 10 baskets and made seven first-quarter threes. Once Leonard and center Ivica Zubac checked out, San Antonio scored eight unanswered points thanks to a size advantage led by big man LaMarcus Aldridge, who had 12 points in the quarter and finished with 27.

Averaging 10 made three-pointers per game, San Antonio had seven by halftime.

But Leonard sought to change that immediately in the third quarter by continuing his hounding defense from the first half. He opened the quarter with a quick three-pointer before ripping the ball away from Dejounte Murray from behind, which led to a transition dunk by Zubac.

Only 75 seconds into the second half, Spurs coach Gregg Popovich called a timeout with his team’s lead down to four. The Clippers would outscore San Antonio by 12 in the quarter, then make the big plays in the final minutes to squeeze past the Spurs.

The Spurs sent an extra defender to guard Leonard early in the first quarter and the strategy led to its desired result of getting the ball out of his hands. And yet one pass found Patrick Beverley across the court for an open three-pointer, and another found Beverley again, this time atop the three-point arc, for another three.

Beverley made four of seven three-pointers for 12 points, his last — on an assist from Leonard — tying the score at 102 with 2:07 left.