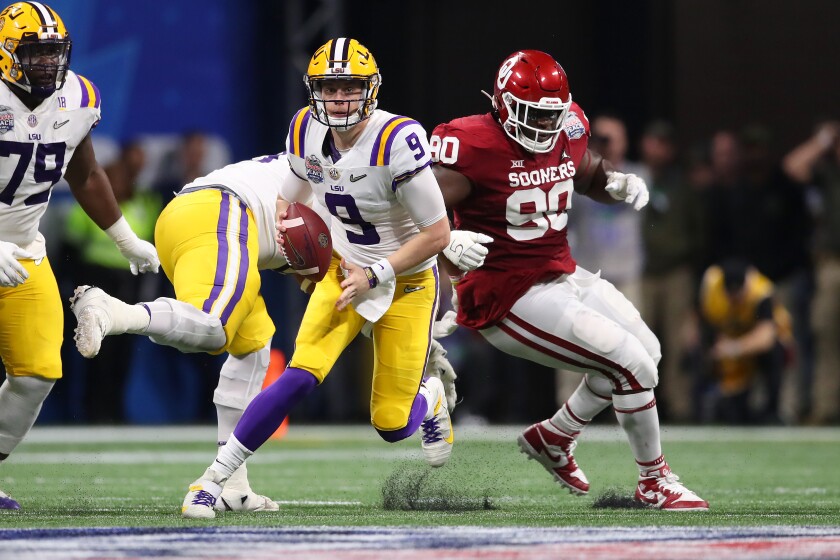 Joe Burrow turned in the greatest performance yet in his Heisman Trophy season, throwing for seven touchdowns and 493 yards as No. 1 Louisiana State romped to a breathtaking 63-28 victory over No. 4 Oklahoma in the Peach Bowl semifinal game Saturday.

The Tigers (14-0) headed to the national championship game against either No. 2 Ohio State or No. 3 Clemson clicking on all cylinders, having dismantled the Sooners (12-2) with a first half for the ages.

Burrow tied the record for any college bowl game with his seven touchdown passes — which all came before the bands hit the field for the halftime show at Mercedes-Benz Stadium. Justin Jefferson was on the receiving end for four of those scoring plays, also tying a bowl record.

For good measure, Burrows scored an eighth touchdown himself on a three-yard run in the third quarter, thoroughly dominating his expected duel with Oklahoma quarterback Jalen Hurts, the Heisman runner-up.

All that as the Tigers played with heavy hearts. Shortly before the game, LSU offensive coordinator Steve Ensminger learned that his daughter-in-law, broadcaster Carley McCord, was among five people killed in a plane crash in Louisiana.

The small plane went down shortly after takeoff for what was supposed to be a flight to Atlanta for the game.

Emsminger had tears running down his cheeks during warmups, but he was in his usual spot high above the field when the game kicked off, calling plays along with passing game coordinator Joe Brady.

It was a brilliant, poignant performance in the face of such tragedy.