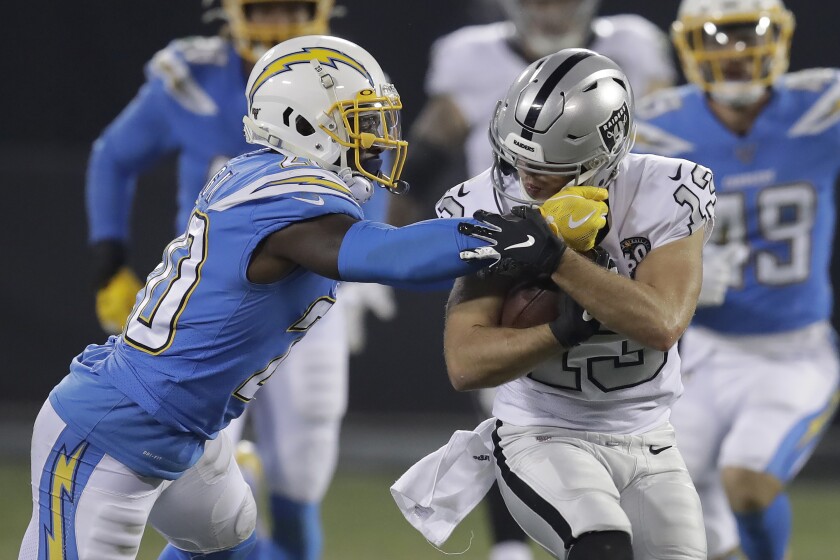 They had the ball, 62 seconds and all three of their timeouts.

Starting at their 25-yard line, all the Chargers needed was a field goal.

Instead, they failed to gain a single yard.

Eight times the Chargers snapped the ball with the game there to be won. Philip Rivers threw seven incompletions before his final desperate heave was picked off to a seal another stringing defeat, 26-24 to Oakland.

“We were trying to move the ball down the field,” coach Anthony Lynn said. “We needed a score. They did a heck of a job. They locked us up. We had eight shots.”

The defeat snapped the Chargers’ two-game winning streak and dropped them to 4-6 as they lost a chance to get back to .500 and move into second place in the AFC West.

Rookie Josh Jacobs put the Raiders ahead with an 18-yard touchdown run with just over a minute to play.

But when Daniel Carlson’s extra-point attempt sailed wide right, the Chargers were gifted an opportunity to still win the game without even needing overtime.

All they had to do was advance the ball far enough to put Michael Badgley in position to kick the decisive field goal. Badgley’s career long is a 59-yarder made last season.

With ample time and three chances to stop the clock, Rivers repeatedly threw deep rather than trying to steadily move the ball with shorter, more conservative passes.

The Chargers received a reprieve on their first fourth down when Oakland cornerback Trayvon Mullen was called for holding, a five-yard penalty that brings with it an automatic first down.

But given another gift, the Chargers still failed to execute anything that netted even the slightest advancement.

“We put ourselves in position to win at the end,” Lynn said. “We didn’t stop anybody. And we didn’t make any plays on offense. It’s disappointing.”

The Chargers trailed 17-14 at halftime and 20-17 entering the fourth quarter after the teams both kicked field goals.

They then took the lead with a 12-play, 80-yard drive that took up eight minutes and five seconds of the final quarter.

Rivers connected with Austin Ekeler for a six-yard touchdown, with Badgley’s extra point making it 24-20 with 4:02 remaining.

The defense, however, was unable to prevent the Raiders from coming right back to retake the lead.

For most of the night, the Chargers had limited the impact of Jacobs, a rookie who entered Thursday seventh in the NFL in rushing.

But on third and one from the Chargers 18-yard line, he burst through the middle and raced into the end zone with little to no resistance.

“We got gashed,” defensive lineman Damion Square said. “If I could redo that 100 times, I would.

That’s the way things usually go in the NFL. The teams that win those plays usually win the game. We didn’t do that today.”

The night was particularly frustrating for Rivers, who threw three interceptions and had two other interceptions nullified by penalties.

Oakland scored its first 10 points after Rivers’ first two interceptions, the second of which safety Erik Harris returned 56 yards for a touchdown with 6:02 to go in the first quarter.

“Those were two crucial errors,” Rivers said. “You give a team 10 points at their place and then you have the ball there with a chance to win and you have eight snaps and go nowhere, it’s gonna be tough to win.”

He finished 17 for 31 for 207 yards and two touchdowns. But his scoring pass to Ekeler proved to be the final attempt he’d complete to a teammate.

The Raiders did take advantage of a battered Chargers offensive front to make things difficult on Rivers.

Rivers was sacked five times for losses totaling 38 yards and hit on five other occasions.

“Any time you speed the game up on anyone, decision-making can get a little iffy at times,” Lynn said. “I definitely thought they sped the game up on us a little bit. But there were plays to be made, as well. We didn’t make those plays.”

Sufficiently on their heels, the Chargers’ offense did recover impressively in the second quarter with a 16-play, 77-yard drive that ended with Rivers hitting tight end Hunter Henry in the back of the end zone for a two-yard touchdown.

After the defense forced a three-and-out, the offense scored again on a four-play, 49-yard drive. Melvin Gordon (who rushed for 108 yards) ran in from three yards out, and the Chargers had a 14-10 lead after their shaky start.

But they failed to hold that advantage as the Raiders marched right back with their own touchdown drive in the closing moments of the first half, Derek Carr finding Alec Ingold for a nine-yard score with 21 seconds left.

That scenario would repeat itself in the final minutes of the second half too, with the added insult of the Chargers’ final drive literally going nowhere.

“We have to work our tail off to reach our goal, and that’s to get back to the tournament,” Lynn said when asked what he told his players afterward. “I don’t know if we can lose another game. They understand that.”