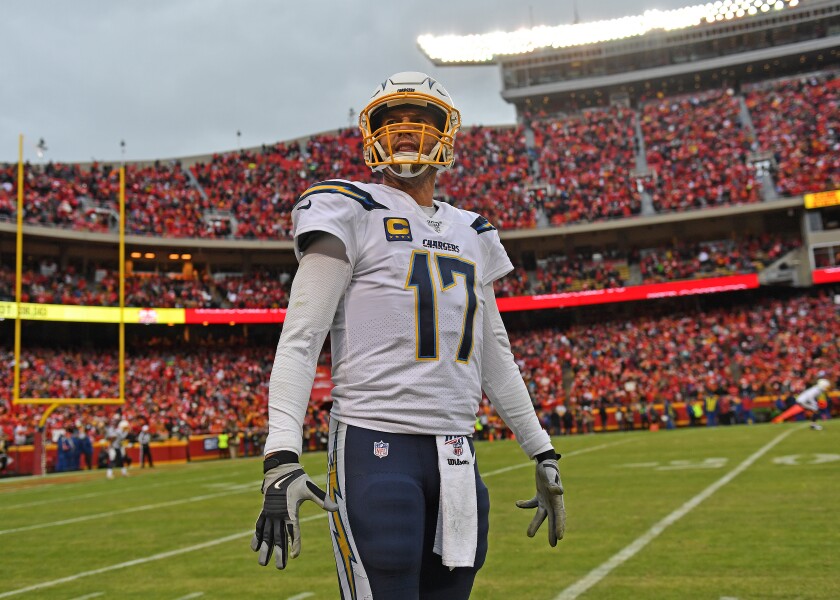 Philip Rivers is the biggest, but not the only, concern for the Chargers this offseason

The Chargers’ offseason starts in the same place where so much of their just completed season began:

In the hands of the quarterback.

The immediate future of this franchise can be correctly dissected only by first addressing the subject of Philip Rivers.

The last time someone else started at the position for the Chargers, star safety Derwin James was 9 years old.

That was New Year’s Eve 2005, when Drew Brees made his final appearance as a Charger with Rivers entering in the second quarter against Denver after Brees sustained a shoulder injury.

The Associated Press account of the game — a 23-7 Broncos victory — included this sentence: “The Chargers will decide in the offseason whether to keep Brees or Rivers or both.”

Ten weeks later, Brees signed with New Orleans, and Rivers has started all 235 games — including the postseason — the Chargers have played since.

That streak could end in 2020 if the team decides a change is necessary, with the 38-year-old Rivers set to become a free agent and coming off a season that included 20 interceptions.

Rivers has made it clear that he wants to continue playing and would prefer to stay with the Chargers.

The team has not committed publicly to him, but the notion all along has been that the Chargers are interested in retaining Rivers. Yet, as his performance continued to lag in 2019, speculation grew about Rivers’ future.

General manager Tom Telesco is scheduled to meet with the media Thursday, a session that figures to be loaded with questions about Rivers. Until then — and perhaps after, too — the situation will be murky.

The upcoming draft class is considered to be deep at quarterback, and the Chargers hold the No. 6 overall pick, their second-highest selection over the last 15 seasons.

The most recent draft pick to start a game at quarterback for this team was Brees, who was taken No. 32 overall in 2001.

The Chargers could conceivably re-sign Rivers and draft his successor, with the idea of the veteran helping mentor the franchise’s potential long-term solution at the most important position in the game.

In moving into the new SoFi Stadium next season, Rivers and his legacy would give the Chargers a degree of legitimacy in trying to sell tickets, with the team’s next quarterback prepping in his shadow.

Then again, the team could decide to not pursue an extension with Rivers and either turn to veteran backup Tyrod Taylor or go outside the organization, while presumably grooming the quarterback just drafted.

Whatever the Chargers do, the spring of 2020 figures to be one of transition at a position that has been remarkably stable for them for nearly a decade and a half.

Fullback Derek Watt, who was named a Pro Bowl alternate on offense and special teams this season, also is scheduled to become an unrestricted free agent in March.

Gordon would seem to be the least likely of that group to return. His failed holdout was just one of the developments that turned 2019 into a frustrating endeavor.

The franchise’s No. 4 all-time leading rusher, Gordon wants to remain with the Chargers, calling the team that drafted him in the first round in 2015 “like your first love, so to speak.”

Despite struggling at times this season — he finished with a career-low 612 yards rushing — Gordon said he still considers himself to be one of the NFL’s top running backs.

“I wanna get something done,” he said. “I’m tired of waiting. Hell, I had an offseason to wait leading up to this.”

If the Chargers don’t bring back Gordon, they could start 2020 with the running back duo of Ekeler and Justin Jackson, who has been productive in limited opportunities over two seasons.

The biggest issue with Jackson has been health, a team that just suffered through a season’s worth of significant injuries no doubt aware of the risk in assuming Jackson can remain on the field.

Henry and Schofield also have expressed interest in re-signing, while acknowledging that the business side of the NFL might dictate otherwise.

“It’s out of my hands now,” Henry said. “I don’t know. We’ll see … I’ve really enjoyed it here. I enjoy this locker room. I enjoy these guys. I enjoy this team. Hopefully, I can continue to be a part of it going forward.”

Defensively, the Chargers’ unrestricted free agents include Adrian Phillips and Jaylen Watkins in the secondary, Jatavis Brown and Nick Dzubnar at linebacker and Damion Square up front.

Yet, the biggest offseason issue could prove to be a player already signed for 2020. Pro Bowl defensive end Joey Bosa is coming off a productive year and has the option of holding out in search of an extension that will be massive.

He has one season remaining on his rookie deal and, at some point soon, Bosa figures to be in possession of a nine-figure contract with some team.

Coming off a 5-11 season, changes are anticipated on coach Anthony Lynn’s staff. The Chargers also will be looking for potential roster upgrades, with offensive line and wide receiver among the areas of concern.

Lynn said the evaluation of what went wrong in 2019 began only hours after the Chargers’ 31-21 loss at Kansas City on Sunday.

“I can’t rest until I start that process,” he explained. “There’s no vacation for me. I can’t go to a golf course right now or go lay on the beach and relax without solving this problem. That’s just the way I relax.”