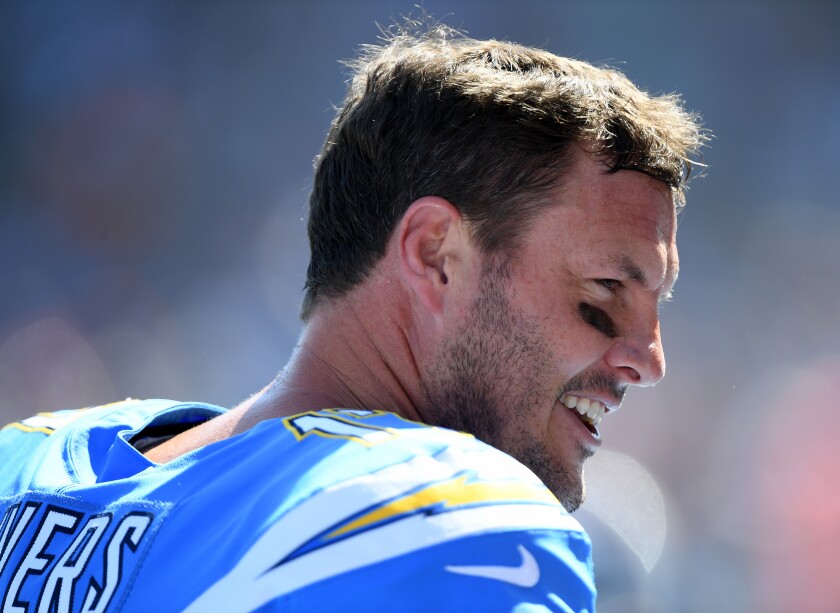 It’s not necessarily his choice but after 16 seasons as an NFL quarterback, Philip Rivers finds himself running the option.

His days with the Chargers are over. The team announced as much Monday morning, making official what everyone knew was coming. And now Rivers begins the next chapter of his life.

The options in front of him: To pursue a job with another team (his preference) or call it a career.

“I’m feeling a wide range of emotions, from sad to reflective to thankful,” he said by phone from his home in Florida. “The underlying one is thankful.”

Rivers, who was selected to eight Pro Bowls, was more than the face of the Chargers franchise but an icon in San Diego, where he stayed with his family when the club moved north. He had a custom SUV made that allowed him to study tape in back on his daily commute to and from Costa Mesa.

He and his wife, Tiffany, recently moved to Florida with their nine children, relocating to a vacation home they bought five years ago. They home-schooled the kids this year in anticipation of a move, and are in a familiar place where in recent years they have spent Easters and summers.

“We’re hunkering down here,” said Rivers, who ultimately plans to return to the couple’s home state. “We know Alabama is the final destination at some point, but until this kind of plays out, we just felt being here was the right thing.”

Rivers, 38, is forever linked with Eli Manning, who retired last month. The Chargers made Manning the No. 1 overall pick in 2004, despite knowing the Mississippi star didn’t want to play for them. The New York Giants chose Rivers fourth, then agreed to a draft-day trade with San Diego to swap rookie quarterbacks.

Whereas Manning retired with two Super Bowl rings, Rivers made it to one AFC championship game with the Chargers, gritting through a torn knee ligament to put up a tough battle at New England before losing.

“I do feel I have some emotional fire and passion still left,” he said. “I know I have the passion for the game that I think is going to last my lifetime. And I think I have the ability left to go play at a high level.”

He’s coming off a season in which he had 23 touchdown passes, nine fewer than in 2018, and 20 interceptions, which was an increase of eight. The Chargers finished 5-11 and 0-6 in the AFC West.

“Some people might disagree that I can still play,” he said. “But I would say I definitely can do it. I cleaned up a few of those other things, and if I’m playing consistently, I can still do it physically.”

There has been a changing of the guard at quarterback during the last two years, with older drop-back passers being replaced by more mobile, dual-threat talents. With an influx of college stars poised to enter the NFL, there aren’t a lot of opportunities for older players at the position.

Indianapolis is one possible landing spot for Rivers. That would put him in an indoor stadium, behind a good offensive line, and reunite him with Colts coach Frank Reich and offensive coordinator Nick Sirianni, both of whom spent time with the Chargers. The Colts offense is similar, both in scheme and language, to the one the Chargers have run since 2013.

Carolina is a possibility, with the future of Cam Newton uncertain because of a Lisfranc foot injury. Rivers played at North Carolina State.

In Florida, the quarterback situations in Tampa Bay and Miami are in flux.

“I can say for certain that if I’m playing, it’s a two-year maximum,” Rivers said. “Whoever the suitors are, I think that would be their hope as well. Because you never know how it goes. Shoot, if we stink it up after one year, I’m probably done. If we play really good, they’ll probably want to go again.

“Certainly you want a chance to win a championship, but it’s not just about that. If you told me right now, ‘You’re going to play for two years, and you’re going to be good. But y’all will not win a Super Bowl. Will you still play?’ Heck yeah, I’ll still play.

“So it’s not like it’s a Super Bowl or nothing. But if it’s a team where it’s going to be tough sledding and they’re two years away from even having a chance, and they led the league in most sacks given up or something, then it’s, ‘I don’t think so, guys.’ ”

Rivers doesn’t envision working in television if he’s not playing, at least not right away. His son Gunner will be in sixth grade next year and Rivers wants to follow in his father’s footsteps and be a high school football coach in Alabama.

“I think I’ll stick to the plan of games on Friday nights, grading the tape on Saturday morning, mow a little grass and be with the boys,” Rivers said. “That’s what I’ve seen us doing for so long.”

But for now, he’s not ready to hang up his shoulder pads.

“As a family, we’ve kind of hashed through all of the possibilities over the last month,” he said. “I think it all circles back to, God willing, there’s a lot of coaching years left down the road. But you can’t turn back the clock and go play again.”