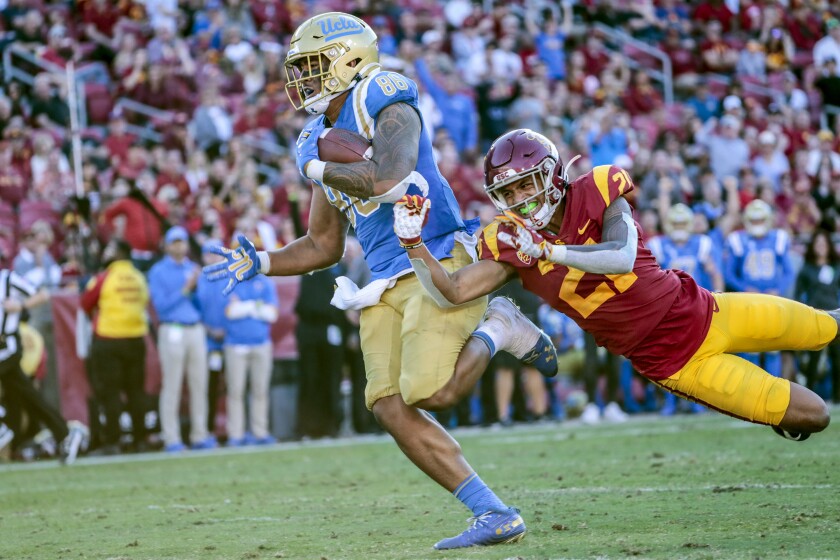 Ever since his arrival in Westwood, Chip Kelly has trumpeted a similar theme about his team: Its tight ends are a primary strength.

It’s what prompted the UCLA coach to install a pro-style offense featuring as many as four tight ends on any given play, about as far removed as possible from his Oregon blur.

If Kelly sticks with his heavy packages in 2020, it won’t be because of a bevy of proven tight ends.

The departures of Devin Asiasi to the NFL draft and Matt Lynch to the transfer portal have considerably thinned the team’s tight end ranks as part of an ongoing exodus of players. Asiasi and cornerback Darnay Holmes gave up their final season of college eligibility to pursue professional football, and Lynch is among 13 Bruins currently in the transfer portal.

Asiasi was the leading receiver among the tight ends with 44 catches for 641 yards and four touchdowns, and Lynch was a valuable veteran who caught a touchdown pass against Arizona.

Their exit has further winnowed a group of tight ends that also included Caleb Wilson during Kelly’s first season in 2018. Wilson led the Bruins with 60 catches for 965 yards and four touchdowns that season.

Now the team returns only three tight ends who have caught a pass in their college careers, with Jordan Wilson, Greg Dulcich and Mike Martinez having combined for 18 catches last season. The Bruins have no tight ends among their incoming recruits, though they have pursued Murrieta Valley High’s Jack Yary as part of a class they hope to complete next month.

UCLA will also need a cornerback to replace Holmes, a three-year starter whose vocal nature and production made him the leader of the secondary. Jay Shaw took over the spot during the two games Holmes missed with an ankle injury last season and will be among the candidates to start there in 2020.

The Bruins have an unexpected hole to fill after guard Christaphany Murray entered the transfer portal this month, leaving them without a two-year starter on the offensive line. Alec Anderson, Jon Gaines II and Siale Liku are among those who could take over that position.

Most of the others who have left via the transfer portal were not significant contributors, with the exception of receiver Theo Howard and linebacker Tyree Thompson. Howard, a top playmaker who is headed to Oklahoma, played in only one game last season because of a wrist injury. Thompson missed the entire season after foot surgery and would need to be granted an additional year of eligibility by the NCAA to play one more college season.

The others in the portal are tight end Joshua Harris, who never played at UCLA; defensive linemen Ulysses Arbuto, David Vardanian and Marcus Moore; offensive lineman Bryan Weitzman; linebackers Jayce Smalley, Je’Vari Anderson and Noah Keeter; and running back Kenroy Higgins II. Anderson would also need to be granted an extra year of eligibility by the NCAA to play another college season.