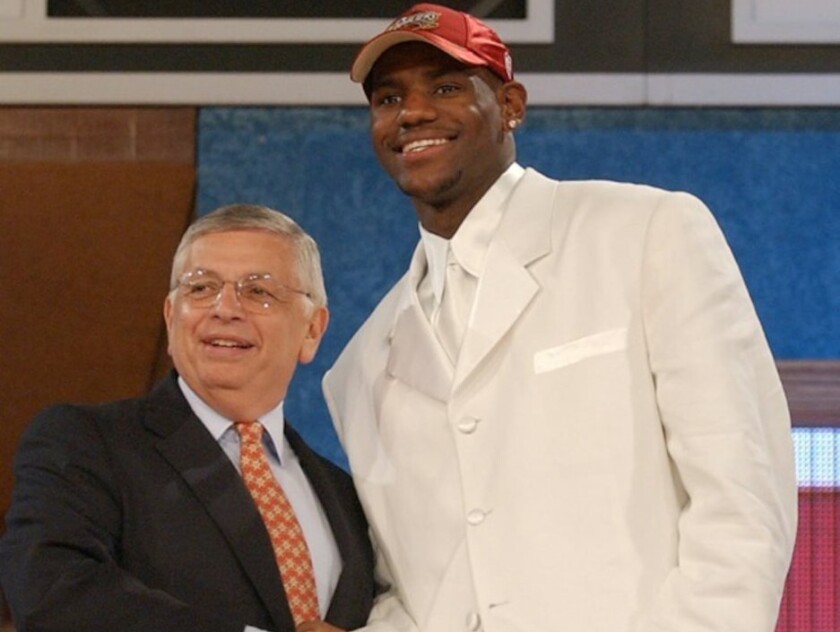 David Stern didn’t just help create global stars. The NBA commissioner created moments. For a generation of players, that first one was the biggest — the moment when the top basketball prospects in the world held out their massive right hands to shake the one connected to the 5-foot-9 lawyer.

“It was a dream come true for me to step up on that stage and shake David’s hand, knowing where I come from. … I don’t know if I even heard my name being called. I think someone had to push me up there. I was so ecstatic,” LeBron James said. “I know, for sure, I remember that handshake, giving me that hat, and that handshake. I’ll never ever forget that.”

But, like most stories about Stern, there’s a footnote, something extra that makes a good story a better one.

On the night James was selected No. 1 overall in the draft, Stern and the nervous rookies were gathered in the back of the Theater at Madison Square Garden, where Stern tried to disarm the future face of the league.

“He told me he wanted to wear my suit one day,” James said with a smile. “I won’t forget that. He told me in the back, ‘You think I can borrow that suit one day?’”

Stern died Wednesday after suffering a brain hemorrhage on Dec. 12. He was 77.

On stage during draft night, Stern was the starting line, the place where their wildest basketball dreams began to come true. The handshake, with a turn toward the cameras, was the de facto starter’s pistol.

It was a role he relished, welcoming the future to the league he loved so dearly.

Crawford finally made it to the stage, the No. 8 pick in the 2000 draft. He walked smoothly and coolly across it, his baggy suit hanging off his wiry frame, toward the handshake he’d wanted for as long he knew the NBA draft was a thing.

And when he finally made it to Stern, it wasn’t fast enough.

“It’s about time you got here,” Stern said.

“I had seen him long before he ever heard of me,” Crawford said after hearing about Stern’s death. “When you’re a kid watching the drafts, you always wanted to be a first-round pick so you could walk across the stage with your hat on and everyone seeing you shake the commish’s hand. That’s the dream because it means you are now officially a part of the NBA — or at least that’s what I thought.”

Getting drafted was just the first step in the process. Contracts had to be signed. In Crawford’s case, a draft-day trade had to be formalized. But those were formalities. Everyone knew that moment signaled your arrival.

“It was a dream come true to hear your name called by the commissioner,” Lakers assistant and Hall of Famer Jason Kidd remembered. “… There’s no better feeling or experience.

“He told me, ‘Welcome to the family.’ At the time, I didn’t know what the hell he was talking about. I was just thinking about being a basketball player, fulfilling my dream. But now, being older, being a part of the NBA family, you know what that really means.”

The people who have worked for Stern have many stories like this about the hyper-focused leader trying to grow the NBA product while finding the right place for a well-timed one-liner. It was intimidating, and sometimes harsh, but it was almost always memorable.

One longtime employee went into Stern’s New York City office to offer his resignation to find him looking out his windows onto Fifth Avenue. After going through a multiple-minute speech thanking Stern for his mentorship, his guidance and the professional opportunities, the commissioner spun in his chair to make direct eye contact — all while holding a World Wrestling Entertainment championship belt.

“Well,” Stern deadpanned, “I guess you’ll never get to wear this.”

As much as he made the NBA an international economic force, navigated the league from a time of crisis into prosperity, and dealt with scandals, Stern’s legacy to the people in the NBA family are the moments he crafted.

When Michael Jordan became NBA champion, Stern was there to hand over the trophy. Stern was always there to present the major awards. When the banners went into the rafters, he was on hand to pass out the rings.

And, maybe most importantly, when players would enter the league and a world of fame and riches, he was the one dropping the velvet rope to let them in.

“Our biggest nights,” Dwight Howard said, “all have David Stern in them.”