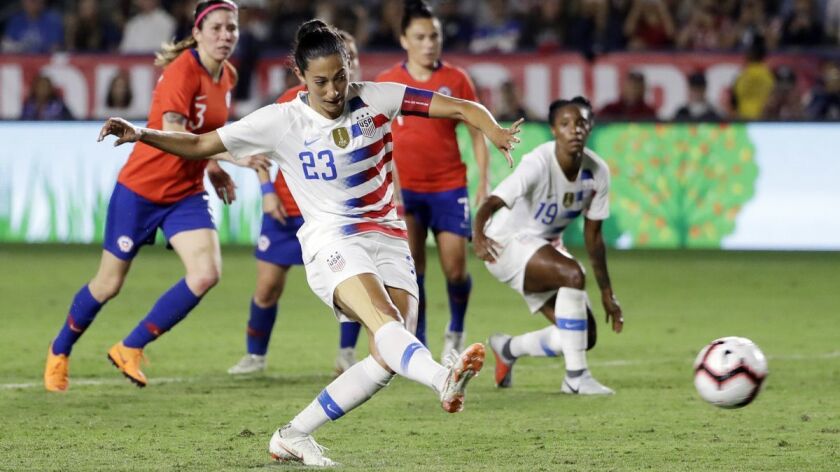 For Christen Press, thoughts of soccer and family are inextricably linked.

Long before she became a two-time World Cup champion with the U.S. women’s national team, her mother and father spent weekends carting their middle daughter to games all over Southern California. And those memories took root, so much so that each time Press comes home, she returns with a flood of emotions.

“I feel, like, overcome with joy and nostalgia,” she said before the national team’s practice Wednesday in Carson, where Press spent hundreds of hours training and playing. “It’s so incredibly special. Every time we play in L.A. my family has thrown a huge tailgate [party].”

Press expects that will happen again Friday before the U.S. plays Mexico in the semifinals of the CONCACAF Women’s Olympic qualifying tournament at Dignity Health Sports Park. Canada meets Costa Rica in the first semifinal, with the two winners earning berths to both this summer’s Tokyo Olympics and Sunday’s CONCACAF tournament final.

This time, however, the party will be different because Friday’s game will be the national team’s first in Carson since Press’ mother Stacy died 13 months ago, following a rapid series of events that included a stroke, a seizure, the discovery of a brain tumor and an aneurysm that left her on life support. She was 58.

“There’s always an acknowledgement of what’s missing,” she said through a forced smile. “I keep my mom close to me always.”

Remarkably Press, 31, has played some of the best soccer of her career despite a heavy heart, making 24 appearances with the national team and tying a career high with 12 assists in 2019. She also scored the opening goal in a 2-1 win over England in the World Cup semifinals — one she celebrated by gazing toward the heavens, pointing up with both hands.

“In a lot of ways it was a very emotional goal,” she said. “There was a lot of support I felt from my team in that moment to get me through what was quite a challenging World Cup.”

In the Olympic qualifying tournament, she returned that favor with four goals and an assist, scoring in all three group-play wins. That gives her a goal in each of the five games the U.S. has played under new coach Vlatko Andonovski.

“I’ve always said she’s a great player,” said Andonovski, who took over for Jill Ellis in November. “It’s not that she’s on fire now. She has more opportunity.”

Press came off the bench in more than half of her national team appearances the last four years, but with Alex Morgan on maternity leave, she’s started two of the team’s three games this year, scoring in the opening four minutes both times.

“Whatever role I’m given, I have to be excellent at it,” she said. “It’s a hard adjustment, being a great substitute. But it’s something I had to do to support the team and help win the World Cup.

“With a new year, new coach, there’s always more opportunities. I think I’m ready for whatever could possibly be thrown my way.”

Like the Olympics, which would offer Press a chance for redemption.

Although Press has never played on a losing team in two trips to the World Cup, she has never started a game the U.S. won in the Olympics. In 2012, she made the Olympic team as an alternate, training but never playing on the gold-winning American team. Four years later in Brazil, the U.S. was eliminated by Sweden in the quarterfinals, its earliest-ever exit and one Press sealed by sailing a game-ending penalty kick high into the stands behind the goal.

That remains one of the few blemishes in an international career that has seen Press score 55 times, 11th-most in U.S. history. And it’s one she can’t erase unless the world champions get past Mexico on Friday, the last obstacle keeping them from a seventh consecutive trip to the Olympics.

“It’s a strength of this team to never get too far ahead of ourselves and never take it for granted,” she said.

But you couldn’t blame the players for feeling confident since the U.S. hasn’t lost at home since the summer of 2017, hasn’t lost anywhere in more than a year and is 21-0-1 in Olympic qualifiers, outscoring opponents 116-3 over that span.

Those numbers mean little to Press, who is focused on moving forward, not looking back.

“I hope that there’ll be a lot of other moments,” she said. “Hopefully even greater moments to come.”