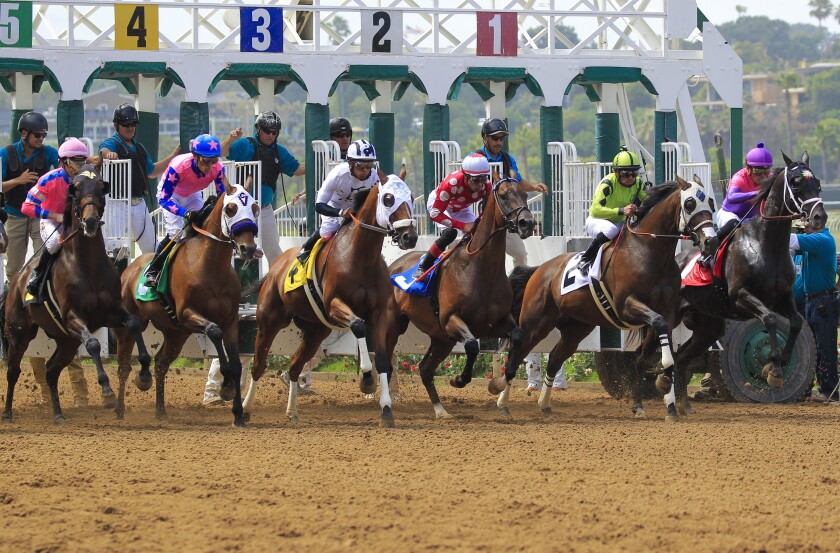 Hello, my name is John Cherwa and welcome back to our horse racing newsletter as we predict the top stories of 2020 and look back at trainer Gary Sherlock.

We don’t often have a Wednesday newsletter but Santa Anita has a special New Year’s Day card that brings us back.

Since today is the first day of 2020, what better point to come up with predictions for the new year. Some of these I feel pretty strong about, some are just a guess and some I came up with just to fill out the list.

So, here are my 10 predictions for horse racing this year. The order is of no importance.

--Synthetic course at Santa Anita. After the marathon winter-spring meeting, Santa Anita will announce that it is reconfiguring the track with a turf course closest to the grandstand and turf club and a new synthetic course on the inside of that. The downhill turf course will return with no dirt crossover.

--Jockey colony gets stronger. The Southern California jockey colony has added Umberto Rispoli, who will quickly become a crowd favorite. He’s the new Abel Cedillo, who is the new Flavien Prat, who is the new Joel Rosario. And none of those guys are going anywhere. Oh, and Mike Smith and Victor Espinoza are still around. I’ll take that lineup.

--More changes on CHRB board. Alex Solis will leave the CHRB board after gaining his trainer’s license. Gov. Gavin Newsom will replace him and the vacant spot held by Fred Maas, meaning that the only Jerry Brown appointment left will be Dennis Alfieri.

--TSG to leave safety coalition. The Stronach Group will leave the recently formed Thoroughbred Safety Coalition over differences on safety measures. TSG will say that the proposals do not go far enough and Churchill Downs will say they are too strict.

--State racing office gets traction. The idea to have a statewide racing office in California starts to become a reality. It would allow the same people to follow and know horses all year long. Tom Robbins of Del Mar will be drafted to head the office, if only on an interim basis.

--CHRB report is inconclusive. The report on the Santa Anita fatalities comes out and there is no smoking gun or commonalities. It will show most of the horses had pre-existing conditions, which is something that’s we’ve always known. But medicine and available equipment isn’t at the point to detect and prevent many of these injuries.

--Ballot initiative doesn’t get off ground. In light of new safety and veterinary regulations from tracks and the CHRB, it’s enough to keep animal rights’ activists from successfully getting a banning of horse racing as a ballot initiative in November. Plus, it’s expensive to get enough signatures.

--Ed Burgart makes hall of fame. Retired race caller Ed Burgart is the first announcer named to the quarter-horse hall of fame after an intense lobbying effort by Los Alamitos and fans of Burgart. (Get the hint, readers? Orlando, you on that?).

--Horse racing integrity act passes and then sits there. The bipartisan Horse Racing Integrity Act makes it to the floor, passes, and is forgotten. The Act, considered a Valhalla for reformers, is actually more of a concept with no real plan in how to enact the changes proposed. And Churchill Downs doesn’t support it, so that could slow any implementation.

--CHRB meeting goes less than three hours. OK, we know this is just a pipe dream, but we thought we’d throw it out there just in case.

OK, we’ll find out how smart I am or if I’m more of a Nostra-dumb-ass.

“The first race of the day, but also of 2020, and things begin with a maiden special weight at a mile on the turf. These are brand new 3-year-olds, and we’re looking for horses who’ve got room to move forward early in their career, meaning, with any of the following variables aiding that process -- moving out in distance, trying the turf for the first time, perhaps running over this Santa Anita sod for the first time, and just as important, understanding who’s been facing who? For example, and as we preach often, when we can look at a prior MSW race, and know that in actuality, it was nothing more than a $30,000 group. This is a huge attribute to have on our side, while the same could be said to know whether a runner exits a race was indeed on the stronger side. That’s the case we believe with the European invader JURGEN (#5). In his lone try at The Curragh, he finished seven lengths behind Mogul, a horse who won in his second start, which came after a second-place effort in his debut when defeated by Geometrical, a runner who went on to just miss in a Group 3 Irish Futurity race next time out. Bottom line, the talent we’ve just mentioned would be 4-5 to beat this particular group here today, and now, in his second start, first try in the U.S., he’s sent long by John Sadler, adding Lasix, and here’s Joel Rosario, always a great sign for the barn. PURE CAMINE (#3) debuts for Neil Drysdale, and it was around this time in January of 2018, when Neil and Drayden Van Dyke teamed for a nice $40 debut winner as our WCHR Top Pick, also debuting on the sod. The drills are on the slow side, but that’s typical for the barn, especially for a runner by Lemon Drop Kid, while the MSW placement along with the turf assignment, both are indicative of a horse who wants longer, and likely is at least somewhat well thought of by his connections, facing a group today which is not a legitimate MSW bunch, at least outside of the top selection.

“X Out Runners (eliminating on the win end): 7

“7 Dominant Soul - Capestro is just terrible when it comes to placing her runners realistically.

“6 Above the Rainbow - If he was live at first asking, Drayden would be riding.

The West Coast Handicapping Report can be found at http://www.westcoasthorseracing.com It has been endorsed by leading trainers, handicappers and industry sources.

Veteran trainer Gary Sherlock died on Sunday after fighting cancer for a while. He was 73. His 74th birthday would have been today. I did a story for our website. Just click here.

I didn’t know Gary well but often saw him at Clockers’ Corner. My memory is how he kept me from looking real stupid. Here’s the story I wrote at the time. Just click here.

Sherlock was at the Preakness in 2016 and I had talked to him on the phone in advance of meeting him in person. I go to the stakes barn where Tom Mansor, the principal owner of Uncle Lino, was holding court. Mansor and Sherlock had been friends forever and held this bond that exists in long-time friends.

Mansor, pointing into his entourage, said the mayor of Pleasanton was over there. I’m thinking, hmmm, Sherlock is from Pleasanton as is Mansor. Could make some color for my story.

I researched who the mayor was and was going to talk to him at the Preakness draw. I go up to Sherlock.

“Hi Gary, which one is the mayor?”

“Did Tom tell you the mayor was here?”

“Ah, he just made that up. You better tell me what else he told you.”

Here was a chance where Gary could have played along with the joke. (I might have.) But he didn’t, saving me from embarrassment.

It’s a pretty insignificant story but does get to what was in that heart of his.

Wednesday’s 10-race holiday card starts at 11:30 a.m. It’s only the third day, so celebration is premature, but the Santa Anita racing office is writing races that seem to be drawing decent-sized fields.

Five of the 10 races are on the turf, with the rail set at 10 feet. The feature is the Grade 2 Joe Hernandez Stakes, for older horses going 5 ½ furlongs on the turf. The race would normally be held on the 6 ½-furlong downhill course but Santa Anita has shuttered that course for sprints, at least for now.

The favorite, at 3-1, is Blitzkrieg for trainer Doug O’Neill and jockey Rafael Bejarano. The O’Neill barn picked up the gelding five races ago in a claimer. He won that race and then the next three before a disappointing seventh in the Gold Cup on May 27. That was his last race. He has won five-of-14 lifetime.

True Valor is the second favorite at 7-2 for owner-trainer Simon Callaghan and Drayden Van Dyke. He won a Grade 2 and 3 before a 10th-place finish in the Breeders’ Cup Mile. He started his career in Britain and Ireland. This will be his seventh race in the United States.

Mr. Unusual was claimed last out by trainer John Sadler and Hronis Racing and today they stretch out to a mile and move to turf for the second career race. The dam has two winners from six starters including a turf winner. Jockey Umberto Rispoli (my new jockey to watch) who already has three seconds from six races in the ‘States gets the mount Wednesday. In that last race going six furlongs the horse came from 13 lengths back into the stretch after a slow start to run sixth, only six lengths back. On the gallop Mr. Unusual cruised on by everyone including the winner. They jump the horse up in class today and give us a sharp workout. Watch the last race replay starting in the stretch, it was impressive. 10-1 is a great value for us!

Sunday’s result: Into Chocolate dropped to 5-1 post time and under an expert ride from Abel Cedillo got the job done winning easily with a great stretch run. It is amazing what a difference a jockey upgrade and no race trouble makes. Into Chocolate paid $12.40 for the win.

Any thoughts, you can reach me at [email protected] You can also feed my ego by following me on Twitter @jcherwa.

Now the star of the show, Wednesday’s entries.