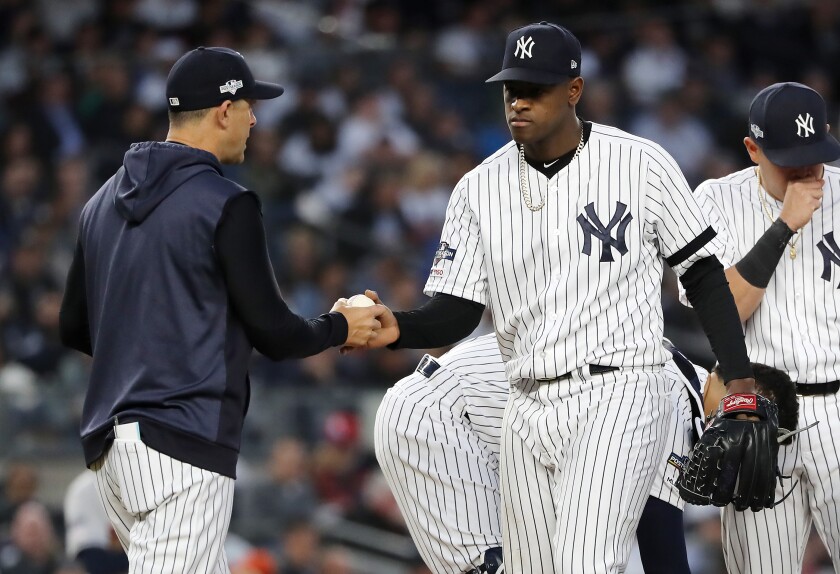 Rainout could affect the dynamic of the AL Championship Series

Shortly after Game 3 of the American League Championship Series had ended, the Houson Astros went about their usual postgame routine, changing, packing their things, and talking to reporters, before heading for the team bus. As they milled about, a few of them glanced up at the TVs mounted on the ceilings. They had been tuned to Game 4 of the NLCS, being played in Washington, where the Nationals had taken a 7-0 lead over the St. Louis Cardinals in the first inning.

It appeared Washington would be heading toward a sweep, whereas the ALCS had been relatively close through three games. Houston led the series two games to one, thanks to an 11th-inning, walk-off home run in Game 2 and Gerrit Cole’s strong effort in Game 3. It felt as if they might be in for a long series.

The Nationals could have a lot of downtime, one Astro remarked.

If that weren’t enough, it seemed as if the ALCS schedule might be disrupted, too. Rain was forecast for Wednesday night, which meant rumblings about Game 4 being pushed back to Thursday.

“I’ve never really had [a rainout] in the playoffs,” said Astros outfielder George Springer, who’s played 40 postseason games with the Astros since 2015. “So I don’t really know. Guess we’ll find out.”

A rainout could change the dynamic of the series. Both teams been expected to use Game 4 as a so-called bullpen day, mixing and matching relievers instead of using a traditional starting pitcher. If Game 4 were pushed back to Thursday, both teams could theoretically use their Game 1 starters — Zack Greinke and Masahiro Tanaka — on regular rest. They could also use their Game 2 starters — Justin Verlander and James Paxton — on regular rest for Game 5.

The Astros have been riding their starting pitching all postseason, the trio of Greinke, Cole and Justin Verlander. In this series, they’ve combined to pitch 19 2/3 innings, strike out 20 batters, and hold New York to five runs.

For the Yankees, a rainout could also give them time to diagnose what’s wrong with their offense, before they face the Astros’ starters again. After exploding for seven runs in Game 1, New York has scored three runs over the last 20 innings. On Tuesday, the Yankees appeared poised to break the game open several times against Cole, one of the the Astros’ Cy Young Award candidates. But he shut them down each time.

In the first inning, Didi Gregorius grounded out with the bases loaded. In the second inning, Aaron Judge struck out swinging with two runners on. And in the fourth inning, DJ LeMahieu flied out to center field, stranding two runners again.

Even after all those missed chances, the Yankees still had hope, when they put two runners on again, with two outs in the fifth inning. As Gregorius came to bat, the crowd rose to its feet and chanted his name. At the time, the Astros led 2-0. One good swing would give the Yankees the lead.

Cole threw a fastball about belt-high and Gregorius pulled a high fly ball toward the short porch in right field. From the dugout, Yankees manager Aaron Boone was willing the ball out.

“But I also knew he got under it and hit it high,” Boone said.

Josh Reddick, the Astros’ right fielder, settled under the ball at the warning track. Just above Reddick, a Yankees fan banged on the outfield wall and screamed in frustration. In the end, the Yankees stranded nine runners and went 0 for 6 with runners in scoring position. Gleyber Torres hit a solo home run to avoid a shutout. The Astros won 4-1.