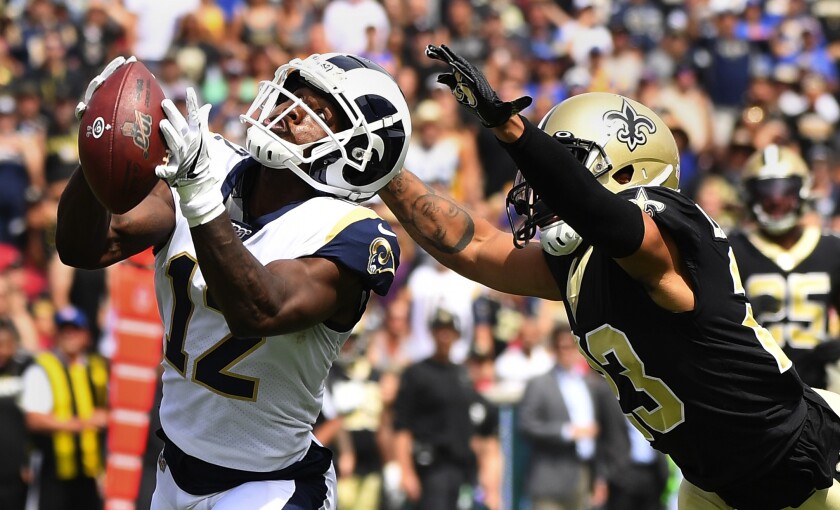 Rams’ Brandin Cooks didn’t consider retirement because of concussion, is set for Ravens

The possibility of retirement was not an option.

Rams receiver Brandin Cooks, who suffered two concussions this season and four in the last 21 months, said Thursday he never considered permanently stepping away from football.

“Absolutely not,” Cooks said emphatically during a news conference after practice. “No doubt about it. When it happened that never went through my mind, and even now it’s not going through my mind.”

Cooks’ last concussion occurred in the Rams’ Oct. 27 game against the Cincinnati Bengals. He sat out two games while recovering and meeting with doctors, but he has cleared concussion protocol and is on track to play Monday night against the Baltimore Ravens at the Coliseum.

Receiver Robert Woods also is on track to return after being absent from last week’s victory over the Chicago Bears because of a family issue. Woods practiced Thursday for the first time since last week.

“Just appreciate the Rams allowing me to deal with my family matters,” Woods said. “It felt good being back out there with the guys and the team.

“Just taking it day by day and just working toward being prepared for Monday night.”

Woods did not specify the issue that caused his absence.

“Something I want to keep private,” he said.

Rams players said it was good to have Cooks and Woods back. Cooks, Woods and Cooper Kupp — the Rams starting receivers — have not been in a game together since Cooks was injured against the Bengals in London.

“It feels like it’s been a while since we’ve all been able to line up together,” Kupp said. “So it’s great to be back out there and not miss a beat.”

“One of the biggest things that I learned, concussions [are] a case-by-case thing,” said Cooks, who had been limited in practices until Thursday, when he was a full participant. “To be able to go there and get some information from Dr. Collins in Pittsburgh was extremely helpful. I’m just thankful for the team — putting me in the right position and looking out for my best interest.

“Taking every step I need to take so I’m comfortable going out there on the field.”

Cooks said he has a new helmet but did not specify if it had extra padding or enhanced protection. He said that it was “not really concerning at all” to have suffered two concussions this season.

“I understand that it’s one of the things that’s part of the game,” he said. “What’s going through my mind is like, ‘OK, let’s get some answers.’ Then figuring out what’s going on.

“It’s a blessing that I don’t have ever have symptoms after.”

Cooks said that training the body can help manage some of the issues related to concussions. But not all.

“I just think it’s an anomaly,” he said. “It’s part of the game and you just never know, right?”

After being sidelined for two games, Cooks is a long shot to keep alive a streak of four consecutive 1,000-yard seasons. He has 27 catches for 402 yards and a touchdown.

Quarterback Jared Goff is happy to have Cooks back.

“Just having his ability, his speed, his smarts, his spacing on the field — everything he does — the way he blocks, everything,” Goff said.

Woods status for Monday night is to be determined. But coach Sean McVay said this week that Woods would not require a full week of practice to play against the Ravens.

“He’s in a good place and we are just taking it a day at a time,” McVay said Thursday.

Running back Malcolm Brown was absent because he is awaiting the birth of a child, McVay said. Receiver Josh Reynolds (illness), offensive lineman Rob Havenstein (knee), punter Johnny Hekker (illness) and defensive back Darious Williams (ankle) did not practice. ... Running back Todd Gurley, who had a season-high 25 carries against the Bears, said his body felt fine. “A little sore,” he said, “but I’m cool.”