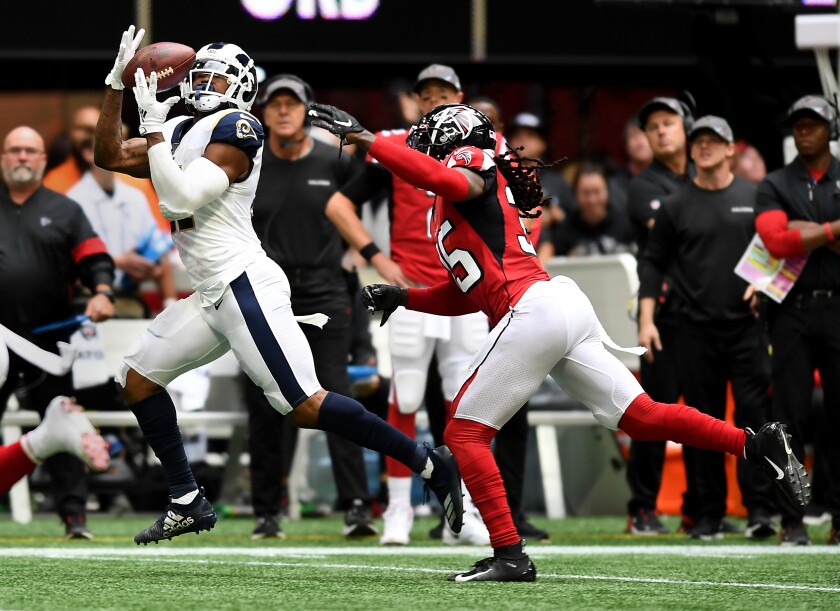 It was a happier homecoming for Rams tight end Gerald Everett.

The Atlanta native caught a touchdown pass in the Rams’ 37-10 victory Sunday over the Atlanta Falcons at Mercedes-Benz Stadium. The result felt much better to Everett than the 13-3 Super Bowl defeat the Rams suffered against the New England Patriots in the same venue in February.

Everett’s eight-yard touchdown in the third quarter gave the Rams a 20-3 lead. To mark the occasion, he broke out the “Dirty Bird” end zone celebration that former Falcons running back Jamal Anderson popularized in the late 1990s.

“That was specific for just here,” said Everett, who caught four passes for 50 yards. “Just something I’ve always wanted to do in front of the home crowd.”

So was quarterback Jared Goff.

Everett was targeted a team-high 10 times, seven times in the first half when the connection was off.

“I told him after the first two, I said, ‘Dude, I don’t care if we missed them but we’re going to keep throwing them. And just be ready.’” Goff said.

Early in the third quarter, Goff found Everett for 33 yards on a play they had just missed on during the first half.

“To come back to it is a demonstration of the confidence they have in one another in getting it figured out and not letting previous setbacks affect your ability to move forward,” coach Sean McVay said.

Four plays later, Everett caught a five-yard pass. That set the stage for a third-down pass that Everett caught on the left side before running into the end zone for his second touchdown of the season.

“You see the result of what happened when you stick with Jared,” Everett said. “He’s a great quarterback, and it’s just every receiver’s job to make the quarterback look good.