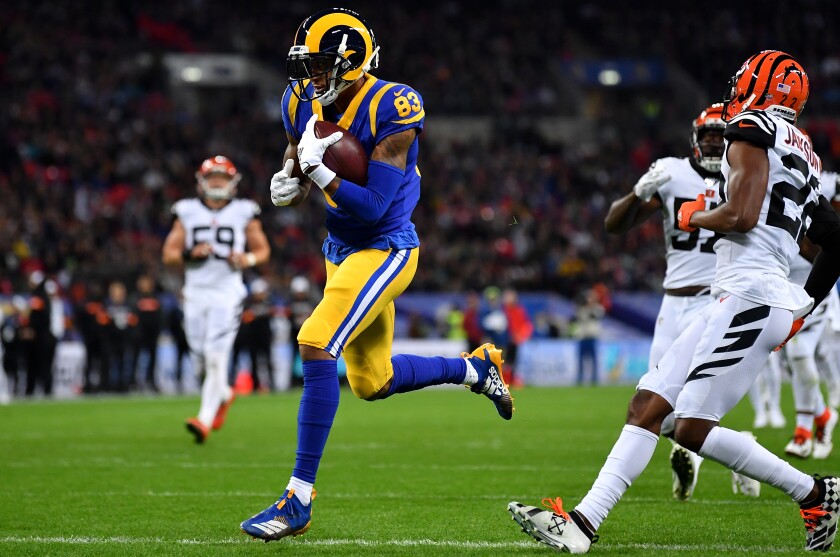 It is becoming a habit for Josh Reynolds.

A Rams starting receiver suffers an injury and Reynolds steps in and makes big plays.

Reynolds did it again Sunday night in the Rams’ 24-10 victory over the Cincinnati Bengals. The third-year pro came on in the first series after Brandin Cooks left the game because of a concussion, and he later caught a 31-yard touchdown pass from quarterback Jared Goff.

“As soon as I passed that linebacker I just hoped for the ball was in the air,” Reynolds said of his scoring play. “Luckily, Jared had seen that.”

Reynolds continued to prove valuable as a fourth receiver on a team that includes Cooks and fellow starters Cooper Kupp and Robert Woods.

“It’s pretty much like last year — kind of just be ready at any point and try to step in without any falloff,” said Reynolds, who caught three passes for 73 yards.

Goff said the touchdown pass came on a play the offense practiced with Reynolds throughout the week.

With veteran linebacker Clay Matthews still sidelined because of a broken jaw, second-year pro Obo Okoronkwo is taking advantage of his opportunity to rotate with Dante Fowler and Sam Ebukam. Okoronkwo had 1½ of the Rams’ five sacks.

Teammates such as Fowler and Aaron Donald lifted his performance, Okoronkwo said.

“I got to rush with some of the best pass rushers I’ve watched,” he said. “Being down there with them definitely slows the game down and makes it a lot more fun.”

“He’s just relentless,” Donald said. “He’s a fast guy and gets off the edge with speed. He’s going 100 miles per hour.

“That’s how he goes at practice and that’s how you do it in a game. It paid big for him today.”

Donald also was relentless in recording a sack.

“I didn’t think that you could pick somebody up and throw them to the ground,” Bengals quarterback Andy Dalton said. “I thought that was a rule, but I guess I was wrong.”

Bengals coach Zac Taylor, a Rams assistant in 2017 and 2018, remained winless and fell to 0-8 in the loss against the Rams and mentor Sean McVay.

“It’s a good group of people there,” Taylor said of the Rams, “and that’s why I’m so encouraged by what we’ve got going in our building because everybody’s on the same page. ... I know it hasn’t paid off yet, but it’s going to because everybody still believes, and we keep believing in each other and stick tight together, and it will pay off just like it’s paid off for them.”

Cornerback Troy Hill barely practiced and was questionable for the game because of a hamstring injury. But he was in the starting lineup opposite Jalen Ramsey.

“We’ve got an unbelievable training staff and they did their thing,” said Hill, who made three tackles and broke up a pass. “Just fight through it and keep rolling.”

Rookie Taylor Rapp, starting again in place of injured safety John Johnson, had a team-best 12 tackles and broke up a pass.