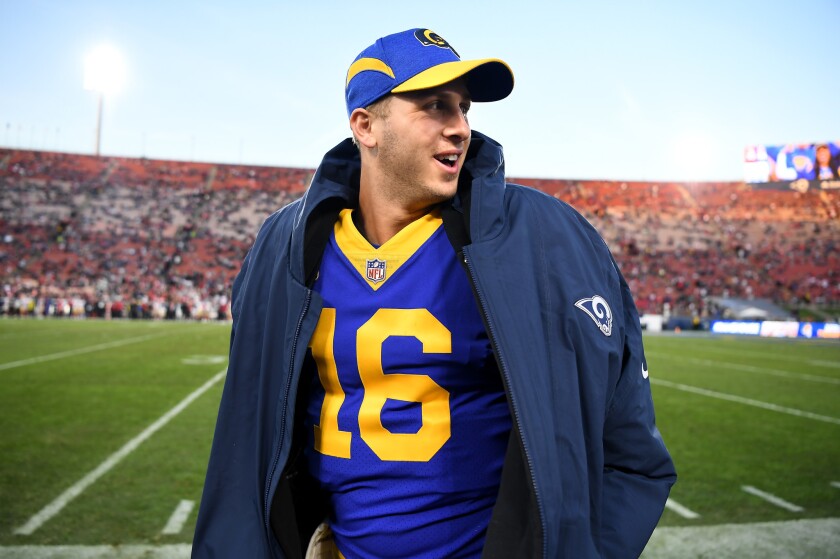 It took a while for Rams quarterback Jared Goff to experience the joy of victory at the Coliseum.

He lost in his only appearance there while playing in college for California, and he was winless in four home starts there as a rookie after the Rams selected him with the No. 1 pick in the 2016 draft.

But Goff has since enjoyed many highlights while directing the Rams team to three victories at the historic venue in 2017, seven last season — including one in the playoffs — and three this season.

With SoFi Stadium in Inglewood opening in 2020, Goff and the Rams make their farewell performance at the Coliseum on Sunday against the Arizona Cardinals.

It’s an opportunity for the Rams to finish with a winning record in an otherwise lost season. A season after playing in the Super Bowl, the Rams are 8-7 and won’t be participating in the playoffs.

It’s also a chance for Goff to end a disappointing season on a winning note.

“By no means has this season been up to my standard or our team’s standard,” Goff said. “But it’ll be one that I’ll always look back on, hopefully learn from and be happy that we did go through this in the long run.”

Goff, 25, started the season with high expectations — and a record contract.

Less than a week before the Sept. 8 opener against the Carolina Panthers, Goff agreed to terms on a $134-million extension that included a record $110 million in guarantees.

Given the market — the Philadelphia Eagles had signed quarterback Carson Wentz to a $128-million deal — it appeared to be a sound investment for a Rams franchise that aimed to roll into its new stadium with a star-studded team coming off another successful season. Goff made the Pro Bowl the previous two seasons, and there was no indication he might fall short of doing it again.

After a 3-0 start, Goff and the Rams played inconsistently, teetering on the verge of elimination from playoff contention throughout much of the second half of the season.

This season, Goff has passed for 19 touchdowns, with a career-worst 16 interceptions.

In last week’s 34-31 Rams loss to the San Francisco 49ers, Goff passed for two touchdowns, but a second-quarter pass was intercepted and returned for a touchdown.

The loss to the 49ers ensured that the Rams would not be in the playoffs for the first time in coach Sean McVay’s three seasons.

The finale against the Cardinals provides Goff with another opportunity to exploit an opponent ranked second to last in total defense and pass defense.

On Dec. 1, the Rams were coming off a 45-6 rout by the Baltimore Ravens when they traveled to Arizona for a game.

Goff completed 32 of 43 passes for 424 yards and two touchdowns, without an interception, in a 34-7 victory that kept alive the Rams’ chances to reach the playoffs.

The next week, Goff passed for 292 yards and two touchdowns, with two interceptions, in a 28-12 victory over the Seattle Seahawks that gave the Rams some momentum.

A costly interception, though, helped set the Dallas Cowboys on their way to a 44-21 blowout victory over the Rams. Six days later, the pick-six by 49ers linebacker Fred Warner gave his team a halftime lead in a game that ended with a game-winning field goal as time expired.

Now there is one more game for Goff to finish on a positive note.

“You want to cap off the year with a good clean performance and see everybody do a great job around him,” McVay said.

That was the case when the Rams defeated the Kansas City Chiefs on “Monday Night Football” last season. Goff passed for 413 yards and four touchdowns and rushed for another in a 54-51 victory.

“That’s probably the all-timer for me in the Coliseum — and our team,” Goff said.

The Rams parlayed that emotional victory into a postseason run that included a divisional-round victory over the Cowboys at the Coliseum.

The Cardinals are 5-9-1, but are riding a two-game winning streak after defeating the Cleveland Browns and the Seahawks.

“We’ve been playing clean, smart situational football,” first-year coach Kliff Kingsbury said. “Our physicality has ticked up and it’s been trending upwards here towards the end, which is exciting.

“Guys are locked in, they’re focused, they’re into it.”

Will the Rams be similarly motivated?

“I think we’ve got the right guys in here who will handle it the right way.”