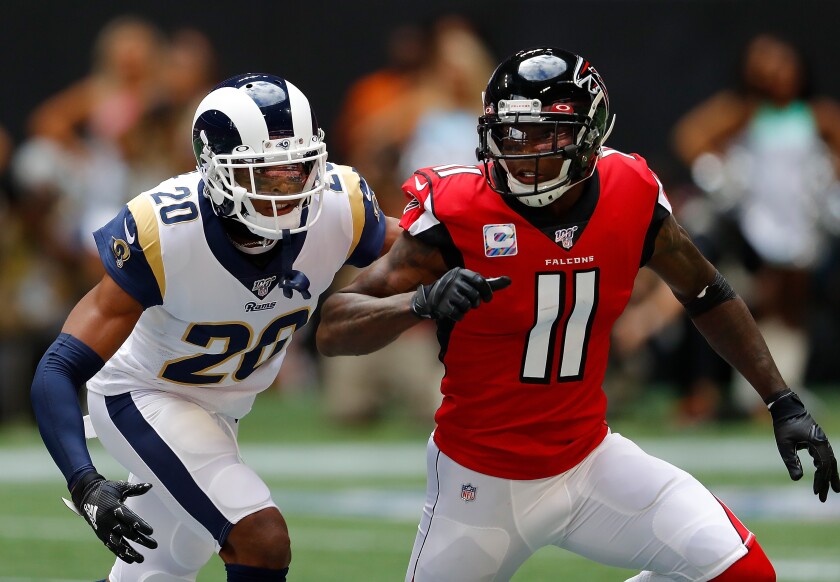 After matching up against proven playmaking receivers such as Julio Jones, JuJu Smith-Schuster and Allen Robinson in his four games with the Rams, Monday night’s game against the Baltimore Ravens is a different kind of challenge for cornerback Jalen Ramsey.

Two of the Ravens’ top three receivers are tight ends. Receiver Marquise Brown is a rookie.

The biggest name on the Ravens’ offense is quarterback Lamar Jackson, a dual threat capable of turning designed plays and broken ones into big gains.

So Ramsey could become more involved in stopping the run against a Ravens team that has won six games in a row.

Jackson, 22, is “super dynamic” and “the MVP front-runner,” Ramsey said.

“Some quarterbacks, you worry about the passing, not really getting out of the pocket and scrambling,” Ramsey said Saturday. “But he can make plays through the air and with his feet.”

Jackson has passed for 19 touchdowns. He also is the leading rusher for a team that averages an NFL-best 203.8 yards a game on the ground. Jackson has run for 781 yards and six touchdowns.

That presents an extra challenge for Ramsey, regarded as perhaps the league’s top cover cornerback.

“I’ve still got to do my job — I’ve still got to cover the receivers, that’s my main priority,” Ramsey said. “But I’m not just a cover corner, though. I get in the run game a lot at times, so I’ll be asked to do that.”

Since Ramsey arrived via a mid-October trade with the Jacksonville Jaguars, the Rams’ defense has played well in victories over the Atlanta Falcons, Cincinnati Bengals and Chicago Bears and also in a loss to the Pittsburgh Steelers.

The defense has given up only one touchdown in each of the last four games, and many Rams players have said that Ramsey’s exceptional coverage skill has been the main difference.

Like Rams lineman Aaron Donald is for the front seven, Ramsey is a “destructive guy on the back end,” Ravens coach John Harbaugh said.

The Ravens are leading the AFC North with an 8-2 record. The Rams are 6-4 and need a victory to remain in playoff contention.

The “Monday Night Football” appearance will be Ramsey’s biggest showcase since joining the Rams.

“Hopefully, we go out there, we set the tone, we play a good game and we let the world know who the L.A. Rams are,” Ramsey said.

With starting receivers Brandin Cooks and Robert Woods not playing against the Bears, Rams coach Sean McVay made maximum use of tight ends as Tyler Higbee and Johnny Mundt provided blocking for running back Todd Gurley, and Gerald Everett caught a 20-yard pass.

Mundt lined up as a fullback on the Rams’ first play. At least two tight ends, and sometimes all three, were on the field at the same time.

With Cooks and Woods set to play Monday, will McVay deploy similar tight-end-heavy formations against the Ravens?

Everett was one of the Rams’ stars in their last appearance on “Monday Night Football.” He caught two fourth-quarter touchdown passes, including one for 40 yards with less than two minutes left in a 54-51 victory over the Kansas City Chiefs last season.

“I love any football game no matter what day of the week,” Everett said. “Monday nights are definitely prime time. And we all aim to be prime-time players. ":

Running back Malcolm Brown returned to practice and will play Monday. Brown was absent Thursday while awaiting the birth of a daughter. ... Woods, absent from last week’s game against the Bears because of a family situation, said he was looking forward to playing Monday. “It’s been great having him back around here — I know everybody feeds off his energy,” McVay said. “We’re just taking it one day at a time right now. That’s what he and I had discussed, and that’s what we are doing.”…. Receiver Josh Reynolds and punter Johnny Hekker were full participants in practice Saturday after sitting out Thursday because of illness. Linebacker Natrez Patrick did not practice because of illness.