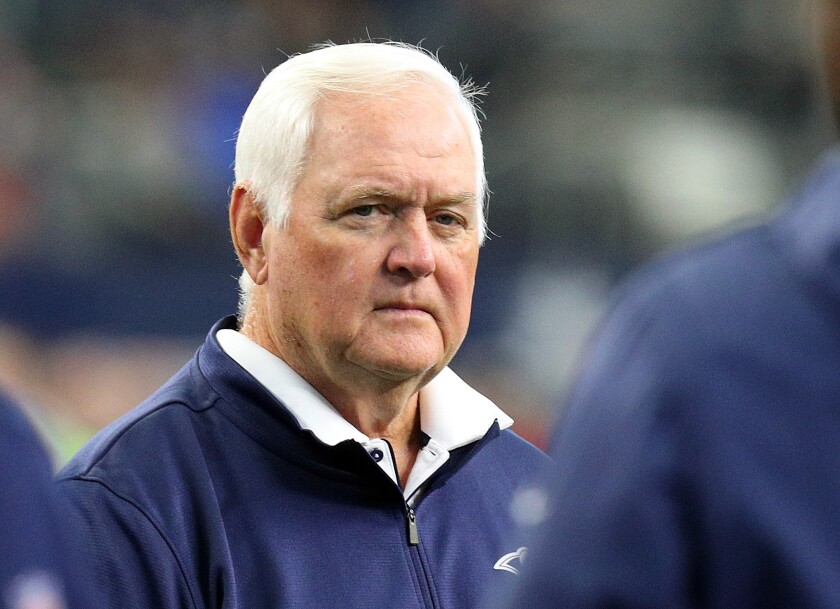 He is completing another season in an NFL coaching career that began in 1976.

Will a game against the Arizona Cardinals on Sunday be defensive coordinator Wade Phillips’ final one with the Rams? Phillips, 72, acknowledged Thursday that he was aware of rumors that he might not be retained after three seasons.

“I don’t pay attention to rumors,” Phillips said during a news conference. “Wherever I’ve been, I’m going to do the best I can do.

“If that’s not good enough for somebody than it isn’t. But we want to finish with a winning season.”

A year after playing in the Super Bowl, the Rams are 8-7 going into their last game at the Coliseum, which has served as a temporary home since their return from St. Louis in 2016. SoFi Stadium in Inglewood will open next season.

The Rams’ defense ranks 13th in the NFL in yards allowed (336.1 yards per game), 10th in pass defense, 15th in rushing defense and 17th in scoring defense.

Last Sunday, the Rams lost to the San Francisco 49ers, 34-31, on a field-goal as time expired. Early in the season, they lost to the Seattle Seahawks, 30-29, after Rams kicker Greg Zuerlein missed a field-goal attempt with less than 30 seconds left.

“We lost some close games that we won last year,” Phillips said

But along with the close losses were several blowout defeats.

The Tampa Bay Buccaneers defeated the Rams 55-40, and the Baltimore Ravens routed the Rams 45-6 — both at the Coliseum. The Dallas Cowboys dominated the Rams in a 44-21 victory at AT&T Stadium.

Asked if he felt that he had performed well enough to be retained, Phillips indicated it was not his decision to make.

“It’s up to somebody else to judge those things,” Phillips said. “You never know what’s going to happen in football.

“But I know one thing: I’m going to do the best I can do and be the best assistant coach I can be.”

Coach Sean McVay said he had spoken to Phillips regarding the rumors but would wait until after the season to evaluate the defensive coordinator and other staff members.

“It will be good for us all to take a step back,” McVay said. “We’ll take some time to be able to really kind of reflect back on the year, look at what are the some of the things we need to do as we move forward.

“And part of that is talking to each one of the staff members, talking to your players and then being able to have a direction as we progress into the next season.”

McVay was 30 when the Rams hired him in 2017 and made him the youngest coach in modern NFL history. Pairing him with Phillips, a head coach for several NFL teams who also oversaw the defense for a Denver Broncos team that won a Super Bowl, worked well for a franchise that advanced to the playoffs in 2017 and the Super Bowl last season.

Phillips’ knowledge, experience and personality have made for a good partnership, McVay said.

“He’s always had a great perspective just based on his experience … whether it be as a head coach or as a coordinator,” McVay said. “But it’s never pushed on you. ... Guys love him. He’s got just a consistency that you can’t help but appreciate.”

Rams players said they have enjoyed playing for Phillips.

“If that could be my defensive coordinator until I was able to retire I’d want to play under him forever,” said edge-rushed Dante Fowler, who has a career-best 11½ sacks.

Said defensive lineman Aaron Donald, the two time NFL defensive player of the year: “Whatever the decision is, as far as that, that’s they’re business, but as far as me playing under Wade and learning from him, it’s been a blessing.”

If Phillips is coaching next season, with the Rams or another team, it would make his sixth decade in the NFL. He gave no indication that he was done.

Defensive lineman Michael Brockers (knee) did not participate in practice. Kick returner Nsimba Webster was limited because he is in concussion protocol.