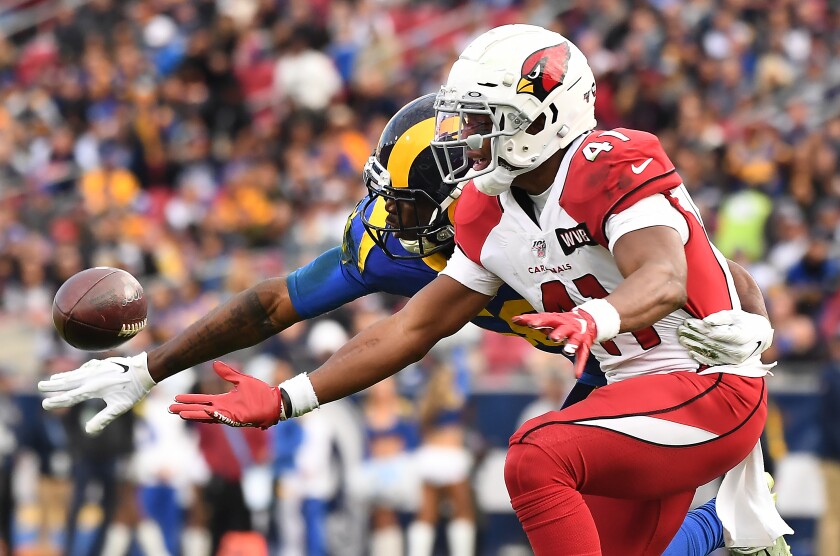 The Rams bid a bittersweet farewell to the Coliseum on Sunday with festivities and accoutrements that included a nostalgic field design and a postgame fireworks show.

They also gave fans something to cheer about during a 31-24 victory over the Arizona Cardinals.

Jared Goff passed for three touchdowns and the defense forced five turnovers as the Rams finished an otherwise disappointing 9-7 season.

“This season obviously was up and down,” coach Sean McVay said. “To be able to cap it off this way I think was a real positive note.”

But a winning record and a victory over a five-win opponent provided little solace for a Rams team that didn’t get to the playoffs a season after playing in the Super Bowl.

“It’s still a disappointing season,” Goff said. “We want to win the division, we want to make the playoffs — and we did neither of those this year.

“It still hurts that’s it over at this point, but finishing the way that we did in the Coliseum, there are some good things to take away.”

Now it’s on to Inglewood, where SoFi Stadium will open in 2020.

Rams players will go through physicals and exit interviews Monday before breaking for an offseason that could include staff changes and definitely will include player movement. McVay and general manager Les Snead will attempt to correct problems that plagued a team that will watch postseason games rather than play in them for the first time in three seasons.

“Not the end result which we had anticipated,” linebacker Clay Matthews said, “especially with such lofty expectations.”

Said safety Eric Weddle: “We weren’t good enough this year, so obviously we got to change something.”

The Rams transformed their image during their four seasons at the Coliseum. A franchise that had not reached the playoffs since 2004 and had not had a winning season since 2003 in St. Louis became an NFL power before succumbing to the malaise that has affected so many teams the season after losing in the Super Bowl.

In 2016, the Rams were 4-12 under former coach Jeff Fisher, but McVay guided the Rams to an 11-5 record and NFC West title in 2017. Last season, the Rams repeated as division champions, finished 13-3 and won two playoff games en route to the Super Bowl, where the New England Patriots schooled them.

The Rams aimed to roll into their new stadium after another playoff run.

But that won’t happen.

“You can look at it both ways,” running back Todd Gurley said of finishing with a winning record. “You know, be disappointed or just be grateful. ... Got nine wins — maybe one or two more to be a playoff team, but we didn’t.”

Gurley was the centerpiece of the offense the previous two seasons, but was cast into a lesser role this season. McVay insisted there was no load-management plan for the 2017 NFL offensive player of the year, who had been sidelined and slowed late last season because of apparent issues related to his surgically repaired left knee.

Gurley had 68 yards in 20 carries against the Cardinals. He finished the season with a career-low 857 yards rushing. Before he stood to meet with reporters at his locker Sunday, he had his left leg propped on a chair and a large bag of ice on his knee.

“It’s Week 17, man, and it feels like Week 17,” he said. “Everybody’s sore. If it’s not one injury, it’s another, so it’s always something during the season — but that’s every player in the league.”

Goff, who signed a $134-million extension before the season, completed 29 of 45 passes for 319 yards against the Cardinals, connecting on touchdown passes to receivers Cooper Kupp and Robert Woods, and tight end Tyler Higbee.

Goff finished the season with 22 touchdown passes and a career-worst 16 interceptions.

“Disappointing year for me personally and for our whole team, a feeling you never want to feel again,” Goff said. “And you need to look introspectively and just figure out the issues. How to get better and work hard.

“Usually, my whole life, I’ve just stuck to that and it’s worked out.”

Goff was on point Sunday. So was a defense that the previous week had given up two long third-down completions to the San Francisco 49ers during a game-winning drive.

The Rams led 17-10 by halftime, but rookie quarterback Kyler Murray tied the score with a touchdown pass to Damiere Byrd.

The Cardinals pulled to within seven points on Kenyan Drake’s short touchdown run with just under four minutes left but the Rams held on for the victory.

“We ended up strong and ended up with a winning season, but other than that we knew we fell short of our goals,” Woods said.

The formula for a return to prominence is not complicated, according to defensive lineman Aaron Donald.

“We just got to be more consistent, play better at times, finish games,” he said. “And we do that, we’ll be back to where we want to be.”