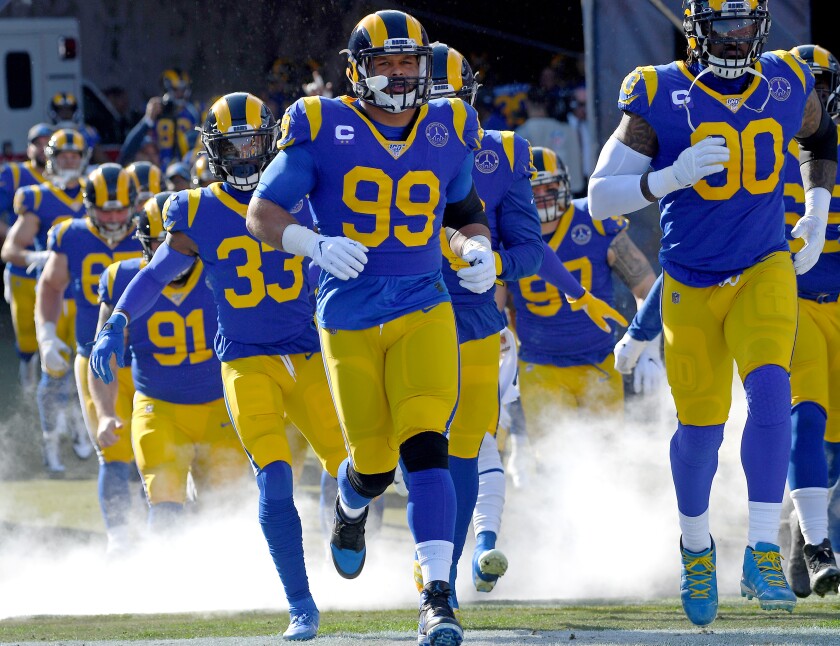 After 14 NFL seasons, Andrew Whitworth is not ready to call it a career.

The Rams’ left tackle, a pending free agent, said Monday he would like to continue playing for the team he helped lead to the Super Bowl last season but finished 9-7 and fell short of making the playoffs this season.

“Hopefully, the opportunity will be here,” Whitworth said as Rams players cleaned out their lockers at the team’s Thousand Oaks facility. “Obviously, anytime you’re a free agent, you’ve got to listen to everything and figure out what’s best for you.

“But of course, for me and my family, being a Ram would be No. 1, without question.”

Whether to re-sign the 38-year-old Whitworth will be one of many decisions the Rams will make during the next few months as they attempt to rebound from a season that fell far below expectations.

Whitworth had a salary-cap number of $16.7 million this season in the final year of the three-year, $33.8-million contract he signed with the Rams after 11 seasons with the Cincinnati Bengals.

Would Whitworth take less to stay with the Rams?

“You let all that play out and just figure out where everything is,” he said. “For everyone else you have to speculate. For me, I know the product. I know what I bring and they do, too, so it’s just us finding common ground.”

Players went through physicals and exit interviews Monday. Coach Sean McVay said his staff would work Tuesday and then take the rest of the week off before returning next Monday to begin evaluations of the coaches and players as they plan for the 2020 season.

Veteran safety Eric Weddle’s situation is among those that will be addressed. The 13-year veteran has said the Rams might be ready to move on with John Johnson and Taylor Rapp as the starting safeties.

McVay said he spoke briefly with Weddle on Monday and would have a longer conversation soon.

“He and I will have a discussion at length,” McVay said. “He’s done a great job this year, and we’ll see what that means for next season.”

The Rams were among 13 teams that finished the season with a winning record. But they were the only one that did not make the playoffs.

“It is tough — make no excuses — because we got to this point based on what our resume’s been over 16 games,” McVay said.

The Rams can point to several obvious plays that might have changed the course of their season. Zuerlein, for example, missed a potential game-winning field goal against the Seattle Seahawks. But Whitworth reminded that the season went awry because of more than a few plays.

“The reality is that also you put yourself in the situation with those couple plays,” he said, “and that’s really what we hadn’t done the last couple years.”

After never coming close to making the playoffs in his first three seasons, defensive tackle Aaron Donald has grown accustomed to the excitement of the postseason the previous two.

So he was still getting adjusted to the idea that the season was over.

“Last year, had a chance to be a world champion,” he said, “and now you’re not even in the playoffs. So it’s tough, definitely. ... The only thing you can do is just find ways to get better.”

Quarterback Jared Goff, who signed a $134-million extension before the season, passed for 22 touchdowns, with a career-worst 16 interceptions. He said he made strides but reiterated Monday that his performance was “not nearly good enough and probably one of the reasons we are sitting here and not in the playoffs.”

Goff said he might “try some things in the weight room” during the offseason to increase his strength and will continue a throwing program he adopted the last few offseasons.

“I don’t think you want to overreact to anything that could have gone one way or the other,” he said. “But ultimately if I play better we should have a lot more success.”

Littleton suffered a “pulmonary contusion” during the Rams’ 31-24 victory over the Cardinals on Sunday, McVay said. “He just needs some rest, no contact,” McVay said. “He’ll be OK.” Brockers suffered a left ankle injury and his lower left leg was in a cast Monday. “Still waiting on the MRI results,” McVay said. McVay said the Rams had not been contacted by other teams about interviewing staff members for jobs. “There’s a couple guys that may have some interest, you know, from some colleges but out of respect for the privacy of those places, I don’t want to get into that.”