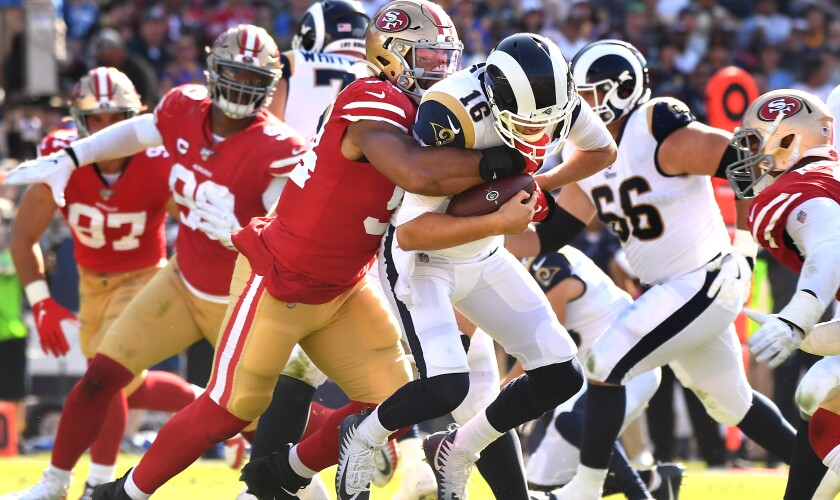 As he stood in front of his locker, searching for the appropriate words to describe the Rams’ current state of mind, veteran safety Eric Weddle stopped and started a few times.

The Rams had just suffered a 20-7 loss to the San Francisco 49ers at the Coliseum, a setback that extended the Rams’ losing streak to three games.

“We’re not panicking,” Weddle finally offered, “but this is serious. We gotta figure it out.”

It’s no longer early in the season. And while it might not be time for full-panic mode, the Rams are clearly reeling.

A franchise that experienced seemingly endless losing streaks during its latter years in St. Louis and in its first season back in Los Angeles was immune to more than even a two-game skid under coach Sean McVay.

That all changed Sunday.

After getting worked by the Tampa Bay Buccaneers at home a few weeks ago, and then losing on the road to the Seattle Seahawks four days later, the Rams could not rebound against a 49ers team coached by its own wunderkind, Kyle Shanahan.

The two-time defending NFC West-champion Rams are 3-3 overall and 0-2 in the division heading into a road game against the Atlanta Falcons and then a “home” game against the Cincinnati Bengals in London.

The resurgent 49ers — rooted on by a large and boisterous contingent of fans among the crowd of 75,695 — gave up an early touchdown before shutting down the Rams and improving to 5-0.

“It turned into a home game pretty quickly,” said 49ers quarterback Jimmy Garoppolo, who completed 24 of 33 passes for 243 yards, with an interception. “It was a lot of red out there.”

McVay’s message to his team?

“Let’s stay together,” he said. “Let’s not this little bit of adversity we’re going through divide us.”

Players echoed that message, but this is clearly uncharted territory for the vast majority of a team that has known only division titles and a Super Bowl run under McVay.

The Rams’ 3-0 start indicated they might avoid the malaise — and mediocrity or worse — that has afflicted so many teams the season after they lost in the Super Bowl. But after three consecutive defeats, the Rams are in danger of repeating the familiar script.

“It’s a gut check,” quarterback Jared Goff said of the three-game losing streak and how the Rams need to respond. “Are you who you say you are?”

The Rams were not at full strength Sunday. Star tailback Todd Gurley, linebacker Clay Matthews and cornerback Aqib Talib sat out because of injuries suffered against the Seahawks. But the Rams struggled the previous two games when those veteran players were in the lineup.

On Sunday, the offense produced just 157 yards. Goff completed 13 of 24 passes for a career-low 78 yards. He was sacked four times and was pressured throughout by the 49ers’ front four.

The Rams did not convert any of their nine third downs, and they were zero for four on fourth down.

“It’s not one answer to it,” Goff said of the offense’s problems. “There’s not one thing that needs to pick up. It’s everyone, myself included. I just need to be better and execute better.”

But Henderson’s fumble on the first play of the second half led to a touchdown that enabled the 49ers to break a 7-7 tie and continue what became a string of 20 consecutive points.

“NFL games come down to little tiny plays here or there throughout the game,” offensive lineman Andrew Whitworth said. “Whereas the year before and even in ‘17, I think we found a way to execute those little moments, and get the momentum back and make a big play that got us in the game or take a lead and get control of a game.

“Right now we’re just missing those plays. When you do, it all kind of just piles on you.”

The 49ers came into the game averaging a league-best 200 yards rushing a game. The Rams limited them to 99, and the defense gave the offense opportunities when Marcus Peters intercepted a pass in the second quarter and Donald stripped the ball from Garoppolo in the fourth.

“They gave us a chance,” McVay said of the defense.

But the offense failed to capitalize. Donald said he was not worried.

“You go out there trying to find ways to feed the offense the ball, and we know they’re going to get on track eventually,” Donald said. “You can’t point fingers and get upset about it. Just got to find a way.”

“I’m not concerned,” said linebacker Samson Ebukam, who started in place of Matthews. “I’ve got full faith in our team, that we’re going to be able to get out of this ruckus. ... We got a no-blink mentality. We’re shooting ourselves in the foot, and once we get that cleaned up, man, it’s over for everybody that we face. I promise you that.”

The Rams will not be back at the Coliseum until they play the Chicago Bears on Nov. 17.

The Rams travel to Atlanta next Sunday, and then will stay there for most of the week before continuing on to London. They are off the next week and then play the Pittsburgh Steelers on Nov. 10.

Going on the road might be the best thing for the Rams.

“You hope so,” Goff said, “You hope it’s galvanizing.”

“Stay connected,” he said. “Just worry about ourselves.”