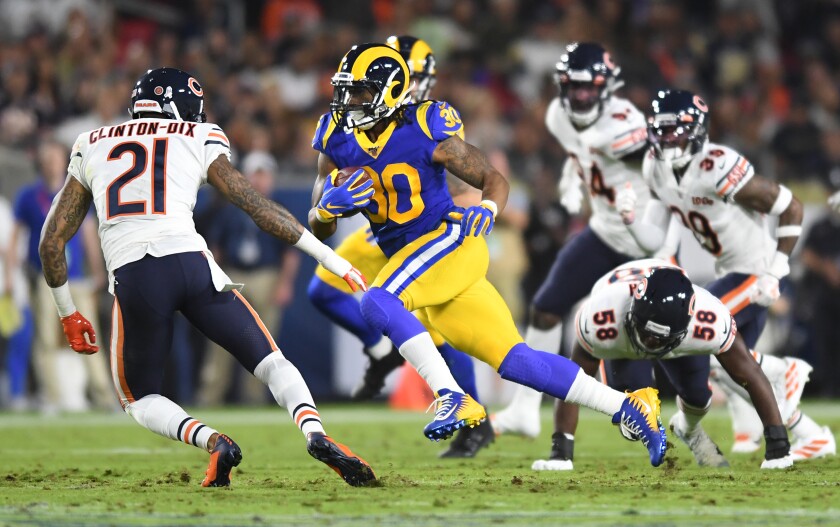 Shortly before his team took the field to play the Chicago Bears on Sunday night, Rams coach Sean McVay delivered a message to running back Todd Gurley.

The subject: the planned play-calling menu.

“Just saying he was going to pound the rock,” Gurley said.

The Rams were without two starting receivers. Their injury-depleted offensive line was largely inexperienced.

So McVay played it safe.

For the first time this season, he finally put the ball in Gurley’s hands with the frequency he did in 2017 and 2018. He left the rest to a defense that has become dominant since the acquisition of cornerback Jalen Ramsey.

To be sure, the win lacked style points. Gurley lost a fumble on the Rams’ first play. Jared Goff had a pass intercepted during the second possession. Big plays were repeatedly nullified by penalties.

But in improving to 6-4, the Rams avoided falling out of playoff contention.

“One of my favorite wins as a Ram,” Goff said.

Gurley had 97 yards rushing on a season-high 25 carries, and scored his seventh rushing touchdown (eighth overall), and cornerback Troy Hill intercepted a pass for a Rams defense that made one of the NFL’s least-productive offenses look the part.

It was a productive homecoming for the Rams, who had not played at the Coliseum since an Oct. 13 loss to the San Francisco 49ers.

That loss had extended a losing streak to three games and appeared to put the Rams’ hopes of a third consecutive playoff appearance in jeopardy.

They rebounded for two victories, however, before losing to the Pittsburgh Steelers.

With the 49ers and the Seattle Seahawks seemingly in control of the NFC West, the Rams needed a victory to keep alive their bid for a wild-card spot.

They got the win despite receiver Brandin Cooks sitting out while recovering from a concussion, and receiver Robert Woods becoming a late scratch because of what the Rams described as a personal issue.They won despite Goff mostly struggling through three quarters before he found a rhythm in the fourth, completing passes to receiver Josh Reynolds and tight end Gerald Everett during a game-clinching drive that ended with Malcolm Brown’s five-yard touchdown run.

They won because McVay avoided the error he made in last week’s 17-12 defeat by the Steelers, when he limited Gurley’s touches and did not get him the ball in the fourth quarter.

Gurley, who signed a massive extension before last season, was happy to help out. He had not carried the ball more than 18 times this season. But that changed Sunday. Along with the 25 carries, he caught three passes for 36 yards. It felt like “the old Todd,” Gurley said.

“Ain’t nobody going to complain about getting the ball,” he said. “If you do, then you’re a damn fool. …. Tonight was my night. So you never know.

“There’s been 11 weeks, but I’m just happy to be able to go out there and grind it out and get this win.”

With Gurley carrying the load, McVay did his best to keep Goff out of harm’s way. The line featured left tackle Andrew Whitworth and four starters with little or no game experience at their positions.

Goff, who completed 11 of 18 passes for 173 yards, acknowledged the offense will need to take some of the onus off the defense in the last six games.

“We need to be better for them, there’s no doubt about that,” he said, adding, “That last drive we got our mojo back and we were rolling and it felt like we usually are on offense.”

If the Rams are to continue winning, however, they probably will need the defense to continue the stellar play it has produced since the Oct. 15 trade for Ramsey, who is regarded as one of the top cornerbacks in the NFL.

“The mentality definitely has changed with us,” safety Eric Weddle said. “Understanding that we’ve got to go out and suffocate teams and play great through all four quarters, and that’s the way we’re going to win games.”

Said linebacker Cory Littleton: “If it does come to us, I’m OK with it. Those are the moments we look for.”

The Rams are now preparing for perhaps their biggest spotlight game of the season — with playoff aspirations once again hanging in the balance. Next Monday night, they play the AFC North-leading Baltimore Ravens at the Coliseum.

With quarterback Lamar Jackson leading the way, the Ravens improved to 8-2 on Sunday with a 41-7 victory over the Houston Texans.

“He’s just a human highlight film, and he’s fun to watch,” Rams linebacker Clay Matthews said of Jackson. “But hopefully, that’s not the case next week.

“A case could be made that we haven’t played an offense like what we’re going to see. It will be a good opportunity for us to showcase what we’re all about.”