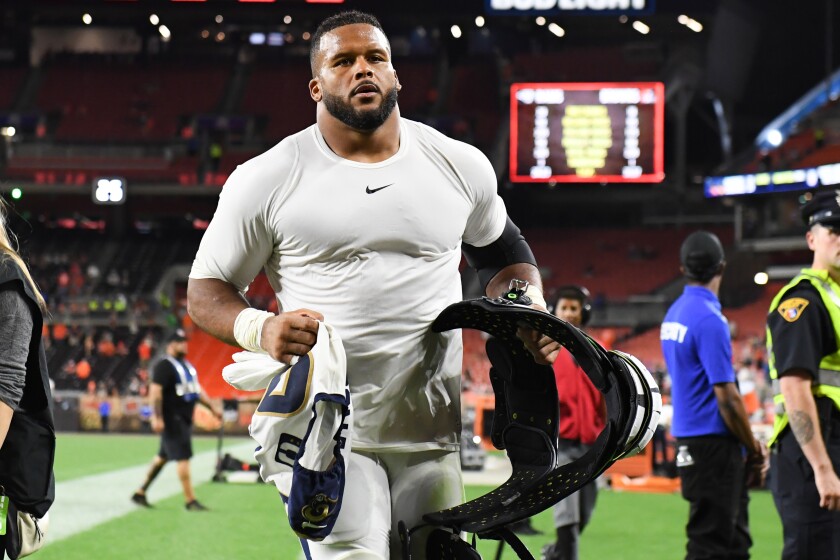 Rams vs. Bears: The biggest stars in the game ... might get crushed by these guys

They were selected eight picks apart in the 2014 NFL draft, last year signed record-setting extensions within 24 hours of each other and combined to win the last three defensive player of the year awards.

The Rams’ injury-depleted offensive line and the Bears’ unproductive offense could make the matchup between the 5-4 Rams and the 4-5 Bears a defensive struggle.

That puts the spotlight on Mack and Donald. Mack has 5½ sacks for a Bears defense that ranks ninth in the NFL.

“He dominates,” Donald said. “If you don’t got a game plan for him, he can take over a game.”

The same is true of Donald, who has six sacks for a Rams team ranked 12th in total defense.

“If you don’t know where he is at on the field on every single play,” Bears coach Matt Nagy said during a teleconference, “you’re going to be in trouble.”

Five years ago, the Oakland Raiders chose Mack fifth in the draft. The 6-foot-3, 269-pound Mack — a rare combination of size, speed and power — won the defensive player of the year award in 2016.

“Not many guys are freakishly explosive, strong, quick, those types of things,” Rams safety Eric Weddle said, adding that while teams employ blocking schemes and other tricks to neutralize Mack, “it doesn’t matter.”

The Rams selected Donald with the 13th pick in the same draft. The 6-1, 280-pound Donald, thought by some to be undersized for an interior lineman, utilized his leverage, power and speed to become a star and the 2017 defensive player of the year.

In 2018, Donald and Mack both sat out training camp awaiting new deals that were in line with their exceptional production.

Donald responded by amassing 20½ sacks, the most in history by an interior lineman. He helped lead the Rams to the Super Bowl and joined Lawrence Taylor and J.J. Watt as the only players to win consecutive defensive player of the year awards.

Mack had 12½ sacks, forced six fumbles and intercepted a pass for a Bears team that advanced to the playoffs for the first time since 2010. He was selected to the Pro Bowl for the fourth year in a row.

Last season, the Bears defeated the Rams, 15-6, at Soldier Field. Mack had three tackles, including a sack, and forced a fumble. Donald made two tackles.

Donald has 65½ career sacks, Mack 58½. Both totals are expected to grow Sunday.

Rams receiver Cooper Kupp and center Austin Blythe were told to stay home rather than attend Friday’s workout because of illness, coach Sean McVay said. “They just both got the little stomach bug — it is contagious — so kept those guys at home,” McVay said. “But we are hopeful that it will just be a 24-hour thing and get them up to speed” Saturday for Sunday’s game. Tight ends Tyler Higbee (knee), Gerald Everett (wrist) and Johnny Mundt (groin) were limited and are listed as questionable, per the injury report. ... Bears linebacker Danny Trevathan (elbow) and tight ends Trey Burton (calf) and Adam Shaheen (foot) were ruled out.