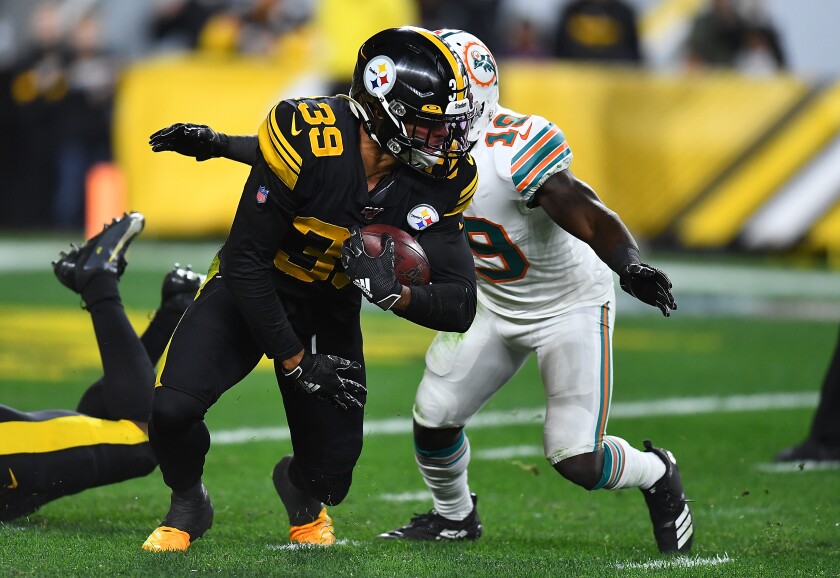 Rams vs. Steelers: How the teams match up ahead of Sunday’s game

How the Rams (5-3) and Pittsburgh Steelers (4-4) match up heading into Sunday’s game:

The Rams offense got back on track in victories over the one-win Atlanta Falcons and winless Cincinnati Bengals. The Steelers’ turnover-happy defense is a tougher test. Rams quarterback Jared Goff has of late avoided the fumbles and interceptions that proved costly early in the season. He has passed for 11 touchdowns, with seven interceptions, for an offense that ranks 10th in the NFL in yardage, fifth in passing offense and 20th in rushing.

Receiver Brandin Cooks will not play because of a concussion he suffered against the Bengals, his second concussion of the season. Josh Reynolds will start in place of Cooks alongside Cooper Kupp and Robert Woods. Running backs Todd Gurley and Darrell Henderson shared carries the last two games, and Malcolm Brown will return after a two-game absence because of an ankle injury.

The Steelers have 22 takeaways, second most in the NFL, and they are equal-opportunity disruptors. They have intercepted 11 passes and recovered 11 fumbles. Safety Minkah Fitzpatrick, acquired from the Miami Dolphins in a September trade, has intercepted four passes for a unit that ranks 11th in total defense, 10th in pass defense and 16th in rushing defense. Linebacker T.J Watt has a team-best 71/2 sacks, and linebacker Bud Dupree six. Former Rams linebacker Mark Barron has one.

After Super Bowl-winning quarterback Ben Roethlisberger suffered an elbow injury in the second game of the season, the Steelers’ playoff chances appeared doomed. Mason Rudolph stepped in and there has been a drop-off: The Steelers rank 28th in yards per game, 27th in passing and 26th in rushing.

Rudolph has passed for 10 touchdowns, with four interceptions, and left it to the defense to make game-changing plays. Star running back James Conner will not play against the Rams because of a shoulder injury that also sidelined him for the Steelers victory over the Indianapolis Colts last Sunday. Against the Colts, running back Jaylen Samuels caught 13 passes for 73 yards, and Trey Edmunds rushed for 73 yards in 12 carries.

Rams cornerback Jalen Ramsey is expected to match up against Smith-Schuster for a defense that should be bolstered by the return of linebacker Clay Matthews. Defensive tackle Aaron Donald, a Pittsburgh native who played at Pitt, has five sacks. Donald is expected to receive a warm welcome at Heinz Field.

Greg Zuerlein of the Rams, who is in the final year of his contract, has made 16 of 20 field-goal attempts. Punter Johnny Hekker is averaging 46.2 yards per kick. Steelers kicker Chris Boswell has made 16 of 17 field-goal attempts, including four in last week’s 26-24 victory over the Colts. Jordan Berry averages 47.1 yards per punt. Ryan Switzer returns punts and kickoffs.

After two victories over struggling teams, and then a week off, the Rams are rested going into the second half of the season. If Goff avoids turnovers against a defense that is excellent at creating them, the Rams should extend their winning streak to three games.