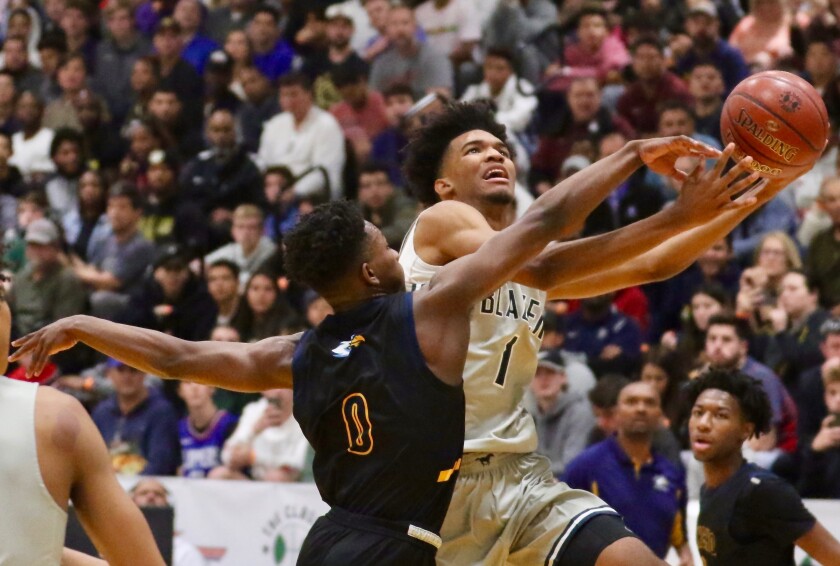 Chatsworth Sierra Canyon has been dubbed a high school basketball “super team,” but Temecula Rancho Christian was the kryptonite Monday night in the Platinum Division championship game of the Classic at Damien.

Two of the best prep teams in California battled hard through four quarters and overtime before the Eagles prevailed 85-81 to hand Sierra Canyon its first loss of the season. The talent on the court would have any college coach salivating, and the teams put on a show for a jam-packed crowd at Damien High in La Verne.

Ziaire Williams, a senior transfer from Sherman Oaks Notre Dame, enjoyed a dazzling season debut with 28 points, including a basket on a lob from B.J. Boston to tie it, 69-69, with seconds left in regulation.

Williams was fouled on a three-point attempt with 1.4 seconds left in overtime and made the first two free throws. He missed the third intentionally but the ball failed to hit the rim and the Eagles (14-2) were given possession. Gonzaga commit Dominick Harris made two free throws with four-tenths of a second left to give him 30 points and seal it.

Early on, 7-foot center Evan Mobley proved why he is rated the No. 1 recruit in the country, opening the scoring with a slam dunk and scoring eight of the Eagles’ first 10 points as they soared to a 10-4 lead.

The USC commit finished with 16 points and capped most valuable player honors with a two-handed jam that put Rancho Christian up by seven halfway through the overtime.

Terren Frank made a three-pointer at the halftime buzzer that gave Sierra Canyon (14-1) an edge of 39-33. The Texas Christian commit rattled in another long-range jumper from the corner to make it an eight-point game early in the third quarter. The Kentucky-bound Boston was red hot in the first half, scoring 15 points, including several baskets of the spectacular variety, and finished with 26.

Etiwanda (12-2), ranked No. 4 by The Times, beat No. 7 Bellflower St. John Bosco 57-54 in the third-place game. Corona Centennial transfer Jaylen Clark was held scoreless in the first half of his season debut, but exploded for 16 points in the second half, including a tomahawk dunk with less than 10 seconds left to provide the final margin. Jeremiah Nyarko led the Braves (12-4) with 18 points.

La Canada St. Francis overcame a nine-point deficit at the start of the fourth quarter to beat Maryknoll of Hawaii, 52-47, to capture the Silver Division championship.