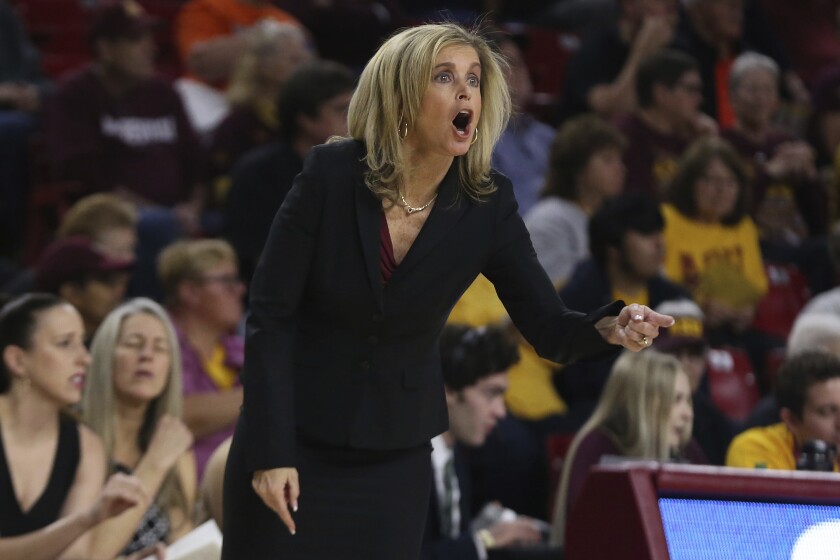 “Has it really been that long,” the Arizona State womens’ basketball coach asks, sitting in the ASU media center hours before a game against Oregon last week.

But just as stunning as the fact that the “Conference of Champions” hasn’t collected a trophy in nearly 30 years is the stacked group of teams that will try to end the drought this season. With six teams in this week’s Associated Press top 25, including four in the top 10, the Pac-12 has plenty of championship candidates.

Will it be Oregon, the returning Final Four team with a star point guard? Or Stanford, led by coach Tara VanDerveer, the first female coach to win 500 games in one league?

“But you can’t count out Oregon State, UCLA, and you know,” Turner Thorne said before pausing, “other teams in our conference.”

The winningest coach in Arizona State history shares a sly smirk. In 36 hours, the Sun Devils would prove just how many teams in the conference can cause a stir as an unranked Arizona State team shocked then-No. 2 Oregon and No. 3 Oregon State with consecutive wins in Tempe to bully itself into the top 25.

Arizona State made its season debut at No. 18 Monday, while Oregon slipped to No. 6 and Oregon State stumbled to No. 8. UCLA, the only undefeated team left in the nation, rose to No. 7. Arizona stayed in the top 25 at No. 21 despite a three-game losing streak, all the losses coming to ranked Pac-12 teams.

Stanford emerged from a chaotic weekend in which 11 ranked teams lost as the highest-ranked Pac-12 team at No. 3. The Cardinal will play the Ducks on Thursday night in Oregon.

Stanford has long been the standard bearer for the Pac-12. The Cardinal, who have appeared in 32 straight NCAA tournaments, are the last team west of the Rockies to win the NCAA title.

Since then, Connecticut grew into a power, winning 11 national titles. Tennessee has won five times since 1992, Baylor three times and Notre Dame twice (along with five runner-up finishes).

Now, through a deliberate process from the Pac-12, the balance of power could be shifting back toward the West.

Kayla Overbeck was 18 years old and wanted to branch out. The 6-foot-1 forward had interest from Pac-12 schools as the Southern Section Division 2A player of the year from Newbury Park, but wanted to push her comfort zone. So she chose Vanderbilt in Nashville, 2,000 miles away.

Now in her second season with USC, the senior transfer is seeing how sweet home can be.

“When I was getting recruited, it was all about the SEC being the best basketball and honestly, I think my opinion is starting to change,” said Overbeck, an All-SEC freshman honoree in 2017 and USC captain this season. “Now the Pac-12 is becoming the place where players want to play, play against the best competition, play with the best players. It’s the best, honestly.”

With Overbeck as a leader, the Trojans are one of the young teams reaping the recruiting rewards of the improving conference. USC’s freshman class was ranked fifth in the nation by ESPN, led by two Gatorade state players of the year in Endiya Rogers (Texas) and Alissa Pili (Alaska) and McDonald’s All-American Angel Jackson. The freshman trio has scored 52.6% of USC’s points this season.

Jackson, a 6-foot-5 center from Richmond, Calif., was a five-star recruit according to ESPN and had three Pac-12 teams (Arizona State, USC and California) in her final four schools, along with Florida. Of the nine ESPN-rated five-star recruits from western states, eight went to Pac-12 schools.

Haley Jones, a 6-foot-1 guard from Santa Cruz, headlined the group as the No. 1 recruit in the nation. With offers from every top school, she picked Stanford and averaged 14.8 points during her first four Pac-12 games.

“A lot of the elite players would head east and play at Tennessee or Rutgers or UConn,” said Oregon coach Kelly Graves, whose program is enjoying historic success behind another West Coast star, Sabrina Ionescu from Walnut Creek, Calif. “A lot of those really elite players are staying out here west and now we’re able to recruit nationally.”

The Pac-12’s expanding recruiting footprint is a reason why Oregon’s sixth-year coach is confident the Ducks won’t decline after seniors Ionescu and Ruthy Hebard graduate. Oregon’s incoming recruiting class, which is ranked No. 1 in the nation, includes five signees from five states: Indiana, New Jersey, Kentucky, Illinois and California. They’re all five-star prospects.

To prospective recruits, coaches in the Pac-12 promote their school’s academic standings and enticing locations. Those things have always held true about the conference, but they look even more attractive to recruits now, as the package includes upgraded facilities and national TV broadcasts.

“As administrations have seen how much value, even equity, women’s basketball can bring to your program, there’s been a greater investment,” Turner Thorne said. “And you can’t win without that.”

While the conference’s TV strategy has been mercilessly criticized from a football standpoint as viewership lags behind the other major conferences and revenue is down, women’s basketball credits the same network for its growth.

All five conference coaches interviewed for this story agreed that the Pac-12 Networks is a powerful recruiting tool, especially on the national stage. This season, all 108 conference games will be televised for the first time.

“Honestly there’s a high correlation between Pac-12 Networks, the TV station, and the respect that the conference has been getting,” VanDerveer said. “The conference has always had great players and great coaches, great universities, but I don’t know if we’ve always gotten the respect that we deserve and I think a lot of it is because people are sleeping when we’re playing.”

The Pac-12 has the nation’s attention now.

“It’s a great thing,” the former Wisconsin coach said, “because you don’t win a national championship and you don’t make your way through the NCAA tournament if you’re not prepared.”

For a conference that asserts itself as the best in the nation, all roads lead to the NCAA tournament, where it figures to be a wide-open championship race this year.

Four teams have held the top spot in the AP poll this season, including this week’s No. 1, South Carolina. It’s only the third time since the AP top 25 became a writer’s poll in the 1994-95 season that there have been four No. 1 teams in the same year.

Without one dominant team leading the charge, VanDerveer believes it could be a good time for the Pac-12 to clear the final hurdle and end its championship drought. The conference has been knocking at the door for years.

Since 2013, the Pac-12 has had five or more NCAA tournament teams each year. Last year, five of the six teams went to the Sweet 16, and Oregon was the fifth different Pac-12 team to reach the Final Four since 2013. No other conference has had so many different national semifinalists during that span.

The NCAA tournament results reflect camaraderie among coaches who united to lift the Pac-12 from the doldrums of the Power Five, UCLA coach Cori Close said.

The group agreed to “Back the Pac” at every opportunity, whether through public comments to reporters or social media. The coaches vowed to never negatively recruit against each other. They strategically scheduled their nonconference games to maximize RPI potential knowing that every Power Five nonconference win was just another feather in the Pac-12’s collective hat.

“People put their egos aside, people put their programs aside and said rising tides will lift all boats,” Close said, “and that’s exactly what’s happened.”

This year, conference coaches hope to see multiple No. 1 seeds from the Pac-12. They want multiple Final Four teams. But for the “Conference of Champions,” this type of historic regular season needs a historic ending.

“This is a real special time,” VanDerveer said. “We just have to back it up with going to the Final Four and winning the national championship.”