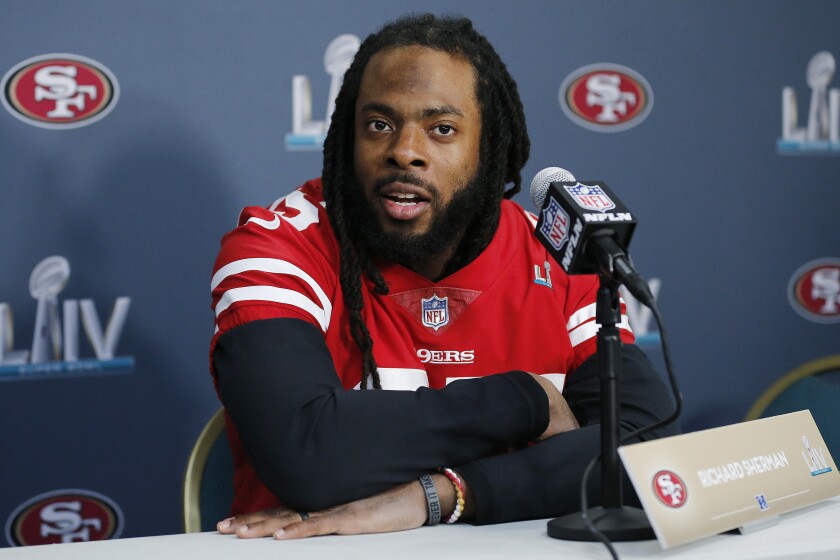 Sherman suggested this week that Rayden’s appearance helped ease the pain of Seattle’s 28-24 loss to New England in Super Bowl XLIX, a defeat sealed in the final seconds when Wilson was picked off at the goal line by Malcolm Butler.

But the timing of the birth was even more significant in a less practical, more cosmic way.

“Thankfully, he stuck in there,” Sherman said of his son. “It’s kind of a cool birthday. He was born on 2/5, which is kind of like I set it up that way.”

Sherman wears jersey No. 25. He will pull the number on again Sunday when he makes his Super Bowl return, this time with the San Francisco 49ers.

It will be the third Super Bowl of his career but first as a dad, and Sherman said the presence of Rayden has changed everything.

“It really gives you something to fight for,” he said. “He fully understands things. He knows what’s going on. It will be a special memory and something we’ll remember forever, if we’re able to get it done.”

So, for Sherman, this Super Bowl is all about a father and his son. Those first two Super Bowls? Those were about a son and his father.

Rick Sherman spent his entire working life collecting trash and driving a garbage truck for the Los Angeles sanitation department until retiring in 2016.

He awakened every day before 4 a.m. and trudged off into the darkness to a job that never stopped stinking.

A few days ago, during a media session hyping Super Bowl LIV, the cornerback was asked to identify the most important role model in his life. His answer: his father.

“That comes from me getting up early every morning,” the older Sherman said. “That was motivation for him to kind of, ‘If my dad can get up and go to work, I can get up and do some work.’ That’s what he’s talking about.”

Father and son always have been close, their bond made stronger by the obstacles conquered on the way back to the Super Bowl.

In November 2017, when he was still playing for the Seahawks, Sherman ruptured his Achilles tendon, an injury that ended his season and, eventually, his time with Seattle.

He would sign with the 49ers and resume playing at the level of an accomplished NFL cornerback, but only after rehabilitating so aggressively that even his father lost weight.

Rick, 56, would rise in Southern California at 5:30 a.m., call Richard in Seattle and talk about that day’s workout and then both would get to sweating.

Rick mostly ran on a treadmill and lifted dumbbells, saying he had reached a point in life where he needed to increase his physical activity anyway.

The two would talk again after each workout and often exchange videos of their sessions. As a result, Rick dropped 17 pounds and Richard regained himself, so much so that Seattle’s NFC West rivals grabbed him.

Now, he has helped San Francisco return to the Super Bowl, six years after his game-saving deflection of a near-touchdown pass lifted the Seahawks past the 49ers in the NFC title game.

“We always get, ‘We hated him and now we love him,’ from San Francisco fans,” Rick said. “We understand why they hated him. I would have hated him too if he tipped the ball away to cost us the NFC championship.”

Having grown up in Compton, Sherman was a Kobe Bryant fan. They first met early in Sherman’s NFL career, at a photo shoot for Nike.

When Sherman torn his Achilles, Bryant phoned him with advice and encouragement in dealing with an injury the late Lakers legend also had to overcome.

Sherman called Bryant “a friend” and “a mentor” and said he stood up and walked off the field with his damaged Achilles only because he recalled Bryant doing the same.

“There’s not enough praise that I can give him,” Sherman said. “There aren’t enough words in my vernacular and my vocabulary to give him. But he deserves every inch, every ounce of respect.”

All this week, Bryant has been remembered for being many things, including a father.

Meanwhile, Sherman has taken every opportunity here to talk about his son, Rayden both pushing him and embracing him.

“That really motivated me to get back to a Super Bowl because I wanted him to be able to see me play,” Sherman said. “That’s the coolest part about it. I play to make him proud.”

A father and his son. A son and his father. The Shermans are in the Super Bowl again, and there’s more than enough pride for all three.