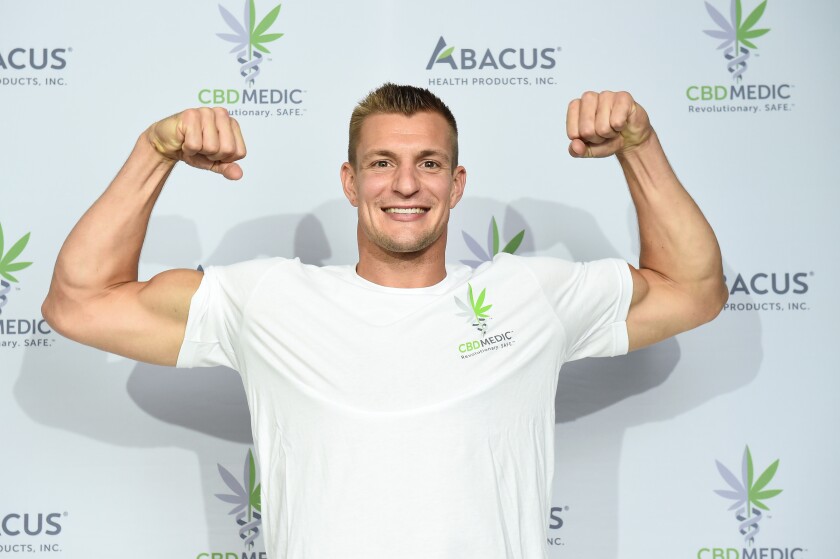 Rob Gronkowski hasn’t had the chance to spike a football all season.

Maybe that’s why the retired New England Patriots tight end just couldn’t resist picking up a Lego bust of comedian Steve Harvey and spiking it, shattering it into tiny pieces.

Or maybe Gronk started celebrating a little early during his gig as a co-host — along with Harvey and TV personality Maria Menounos — of Fox’s New Year’s Eve coverage live from Times Square.

Or maybe the whole thing was scripted.

Earlier in the broadcast, Harvey was presented with an incredible likeness of himself made entirely of Lego blocks (Fox will be airing a competition show called “Lego Masters” starting next month).

“Someone spent a lot of time on this,” he said. “Someone is not employed — you got to have a lot of free time.”

He added: “Imma stare at this for a couple hours. That’s pretty slick! That’s actually super fly right there.”

But then Gronk got his paws on it. Dressed in an old-time football uniform, complete with leather helmet, the three-time Super Bowl champion acted as if he had just caught a touchdown pass from Tom Brady — but instead of spiking a football, he used Harvey’s head (the Lego version).

Harvey appeared to be irked.

“Are you serious?” he said as Gronk danced around in the remains of the no-longer super-fly work of Lego art. “I don’t wanna work with him no more. Why is he here? Why are you here? What is wrong with you? You’re mentally imbalanced.”

Harvey did manage to get a joke in — “You know how hard it is to get them brown Legos?” he said — and he later tweeted photos of the incident.

“I can’t believe @RobGronkowski did this to LEGO Steve,” Harvey tweeted.

So was Harvey legitimately upset and trying to put on a happy face for the sake of the broadcast? Or was it all just one big stunt?

Hard to say, although it is worth noting that the verified “New Year’s Eve on Fox” Twitter account posted tons of clips from the broadcast throughout the night, including several featuring the Lego bust, but none of Gronkowski destroying the item.

If it was unplanned, well, was it really a good idea to invite Gronk to co-host an event on the biggest party night of the year?