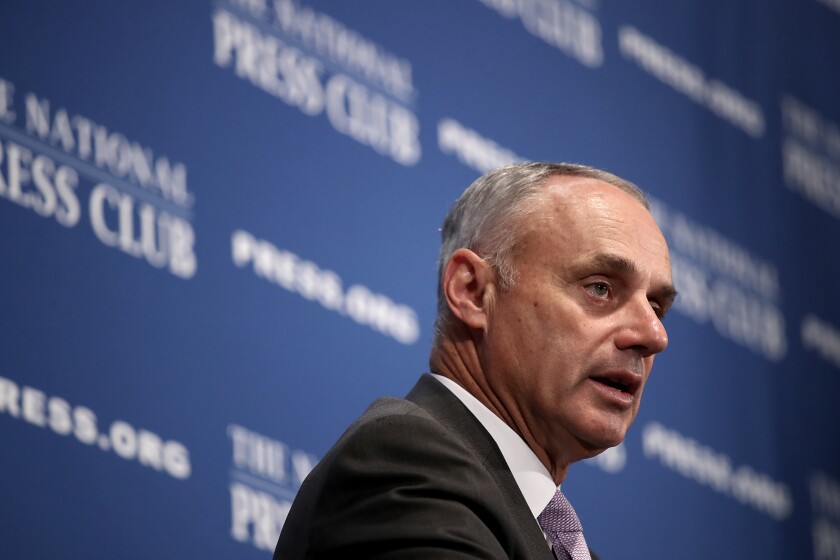 Over a month after Major League Baseball’s report indicated that the Houston Astros illegally stole signs in the 2017 postseason without detailing the method, Commissioner Rob Manfred confirmed Tuesday that the Astros continued banging trash cans to relay signs in the playoffs.

Astros players, most notably shortstop Carlos Correa, have insisted the trash-can system was abandoned in the postseason because Minute Maid Park, their home stadium, was too loud for batters to hear the bangs. But Manfred said Astros players admitted the scheme was used in the postseason during the league’s investigation. The Astros beat the Dodgers in seven games to win the World Series.

Several Dodgers, notably Justin Turner and Cody Bellinger, have been outspoken about the Astros’ cheating and the league’s response. Turner took the criticism a step further Monday by directly criticizing Manfred.

The Dodgers third baseman contended Manfred “set a weak precedent” for not punishing players directly and blasted the commissioner for referring to the World Series trophy as “a piece of metal.” Manfred apologized for the comment Tuesday.

“In an effort to make a rhetorical point, I referred to the World Series trophy in a disrespectful way,” he said. “It was a mistake to say what I said.”

Manfred made the reference Sunday when asked whether the Astros should have been forced to vacate the 2017 World Series title. The commissioner said doing that would have been unrealistic. He maintained the public humiliation the Astros have faced is enough punishment.

In outlining his decision to grant players blanket immunity, Manfred said the league immediately launched its investigation upon former Astros pitcher Mike Fiers going public with the Astros’ transgressions in a story published by The Athletic in November.

The commissioner said the league wasn’t making progress so it decided to reach out to the players’ association to request player cooperation. But the union responded negatively when the league told the union that it could not rule out levying player discipline from its findings.

According to Manfred, the league then gave the union a list of players they would give immunity. The union responded by saying players would only cooperate if they were all given immunity. The league, believing it could not proceed without player cooperation, agreed to the parameters.

“Let me clear,” Manfred said, “we would have not gotten where we got in terms of understanding the facts, learning the facts, disclosing the facts if we hadn’t reached that agreement.”

And yet people around the league — led by players loudly speaking their minds — remain skeptical that the league extracted all the facts or, worse, believe the league did not disclose all of the facts to avoid a bigger debacle. Recent published reports indicating the Astros’ cheating went deeper than the league’s report indicated have only fueled more doubt.

“If you don’t feel like you’re getting the facts, it’s not going to go well,” Dodgers manager Dave Roberts said. “Because what’s shown is that every few weeks more facts come out. And so as we all want to move forward, I guess until things really are out, then we can’t.”

But Manfred was adamant that the league has been “100%” transparent with its findings. He said he would be willing to meet with players who remain unsatisfied with MLB’s response and decision to grant immunity to players in exchange for cooperation.

“We were successful in finding the facts,” Manfred said. “It wasn’t easy. It took a lot of hard work. And maybe even harder was to write those facts down and make them public, frankly, because they weren’t very pretty. But we did both those things.”