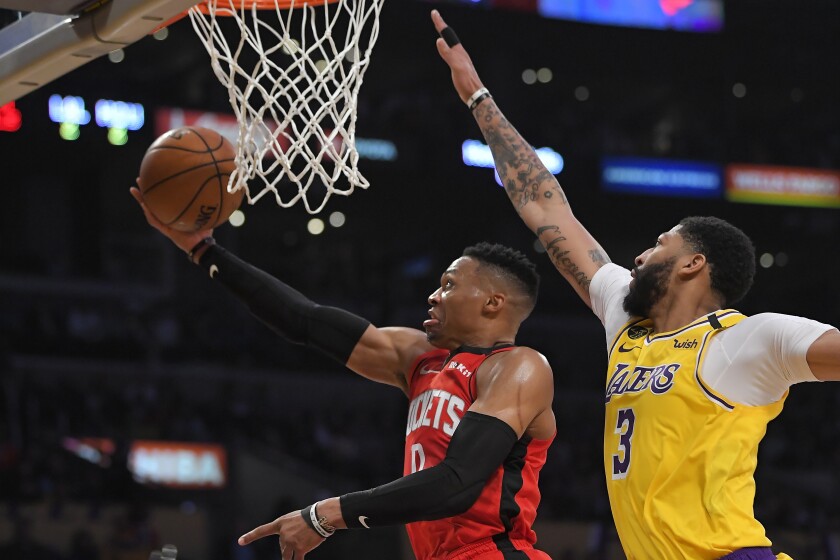 At no point did the Lakers face any player from the Houston Rockets taller than 6-foot-8 during Thursday night’s game at Staples Center.

What the Lakers saw was the Rockets take playing small ball to a new level, never playing a traditional center, spreading the court with three-point shooters and letting their superstar guards James Harden and Russell Westbrook dominate the action.

The result was the Lakers’ defense getting stretched to the point they were unable to contain the Rockets during a 121-111 defeat before 18,997 fans.

The Lakers knew the game would be a challenge after the Rockets traded 6-foot-10 center Clint Capela to the Atlanta Hawks in a three-team deal that got Houston 6-8 Robert Covington from the Minnesota Timberwolves.

“You just gotta fly around, gotta communicate,” LeBron James said. “You know James is gonna create a lot of eyes on him with what he’s doing this year as far as scoring the basketball. But Russ, Russ definitely can do what Russell’s capable of doing. We’ve seen it a lot throughout his career. He was wonderful tonight.”

Westbrook was the ringmaster, getting into the lane and seemingly at will in scoring 41 points on 17-for-28 shooting from the field.

The Lakers kept Harden in check for the most part with constant double teams, limiting him to 14 points on three-for-10 shooting.

“Anytime you see a unique style of play, it takes a little while to figure it out,” Lakers coach Frank Vogel said. “But it’s really not that different than what we see with a lot of teams that have centers that shoot threes. The difference is they have two elite, elite superstar offensive players that you’re trying to figure out how to guard, with five three-point shooters out there. So it’s a challenge. We can be a lot better than we were tonight. We’ve just got to be better.”

The Lakers went inside to Davis often, throwing him enough passes for him to score 32 points to go along with 13 rebounds.

But as the game progressed, the Rockets began to double team Davis and the Lakers tried to force the ball inside.

“We had good looks. I think we just didn’t complete some passes,” Davis said. “They was able to deflect some for steals and get out and run. That was our game plan, though, to try to set screens, slip and force a switch, whether the guys who handle the ball drive or we throw it over the top. But it was some plays where I got the ball where I could have had some kick-outs. Just look at film and get ready for the next game.”