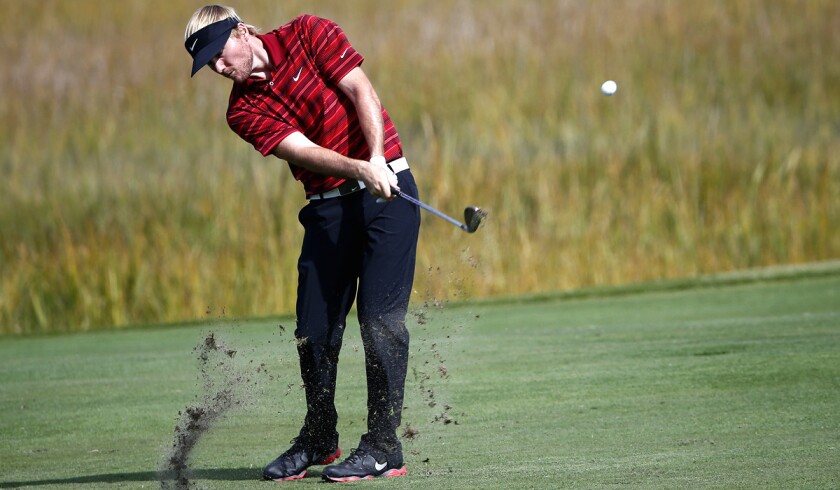 Russell Henley has a bad day on the golf course

Russell Henley thought he was in the top 12 at the PGA Tour’s Mayakoba Classic in Mexico on Saturday, poised to perhaps win the tournament. Then he discovered an important rule: Always keep track of your golf balls.

While autographing golf balls for the crowd after Saturday’s round, he discovered that he had a different brand of golf ball in his bag and didn’t know how it got there. He then figured out that he had used that ball for four holes during the round.

The penalty is two strokes per hole, for a total of eight penalty strokes, turning his 66-69 into a 66-77. That dropped him from the top 12 to missing the cut.

“It was a small dash, a different way it was marked that would have been easy to overlook,” said PGA Tour rules official Brad Fabel, according to pgatour.com. “He came to us and said he didn’t know how it had gotten in his bag.”

What is your all-time favorite local sports moment? Email me at [email protected] and tell me what it is and why, and it could appear in a future Sports newsletter or Morning Briefing.

This moment comes from Tim Piatt of Simi Valley:

My sports highlight did not take place in a stadium, arena, gymnasium, field or golf course, but in a modest apartment in the San Fernando Valley. My brothers and I were there, thanks to the winning bid at a charity auction for “Lunch With the Wizard of Westwood.”

After eating at the coach’s favorite haunt, we returned to his apartment, hoping to hear some hoop stories and perhaps some scoop on notorious coaches; but he demurred, preferring instead to talk about family and faith. Oh, the joy on his face when he showed us the present from his great-granddaughter on the occasion of his 89th birthday just two months before!

The coach signed one of his books, which I had picked up that morning at the local Borders, and which I took that evening as a gift to my young friend Dave. Sitting by his bedside, I read to him into the night. He had been sent home just the day before with hospice care and a morphine pump, and passed away two weeks later, at the age of 36. A dedicated teacher and a total gym rat, he was an acolyte of his coaching idol and steady practitioner of the “pyramid of success,” on and off the court. Months later Dave’s parents gave that very book back to me.

A priceless gift and a reminder of two extraordinary men!

Whenever I hear the “squeak-squeak-squeak” of sneakers on a gym floor, it reminds me of my friend and what is written on the title page of the book:

From one teacher and coach to another.