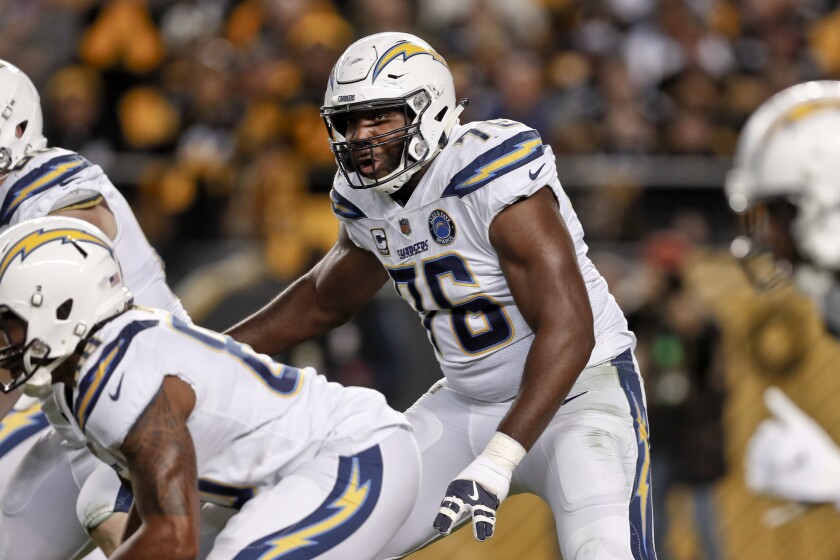 The diagnosis of a pulmonary embolism caused by blood clots was scary enough for Russell Okung to fathom in June. That the Chargers left tackle’s condition would also be career-threatening felt like a twisting of the knife.

“I’ve had plenty of football injuries — I hurt an ankle, a toe, I blew out my shoulder — but nothing life-threatening like this,” Okung, 32, said. “You’re on a table and a doctor is literally telling you you’re not going to play football again. I decided that I didn’t want that to happen.”

Okung spent the first six weeks of the season on the non-football illness list. When he returned to the practice field in mid-October, he said he “definitely looked death right in the face” during his medical ordeal.

In his first game back on Sunday, against the Chicago Bears on a brilliant autumn afternoon at Soldier Field, Okung stared three-time All-Pro edge rusher Khalil Mack right in the face, and it didn’t seem nearly as frightening.

“Yeah, if I were to compare Khalil Mack with a blood clot, I think I’d take Mack any day,” Okung said after the Chargers pulled out a 17-16 victory over the Bears. “Look man, the guy’s a beast. He and [linebacker Leonard] Floyd are really good at what they do. We had our hands full, but I think we did a good job with them.”

Okung played every offensive snap of the first three quarters before departing early in the fourth quarter because of a calf injury that he described as “mild,” a tweak that isn’t expected to sideline him for next week’s game against Green Bay.

Floyd lined up across Okung on the Chargers’ first two possessions, but Mack moved to Okung’s side late in the first quarter and remained there for most of the game.

The Chargers had little success running the ball — netting 36 yards rushing on 12 carries after accumulating only 106 yards on 51 carries in three straight losses to Denver, Pittsburgh and Tennessee — and quarterback Philip Rivers had a so-so day, completing 19 of 29 passes for 201 yards, with one touchdown and one interception.

But the Bears, who allowed the fifth-fewest points (17.5 a game) and fourth-fewest yards per play (4.91) through Week 7, sacked Rivers only once for a loss of six yards with two minutes left, after Okung was replaced by Trent Scott. Chicago hurried Rivers five other times, once on the first-quarter pick. Mack, who had the sack, and Floyd had four tackles each.

“The snaps weren’t easy, “ Okung said. “I had [Mack and Floyd] breathing down my neck. Those guys can play some ball, you know? But up front, as a group, I thought we did a good job of protecting Philip for most of the game.”

The Chargers’ run game has ground to a virtual halt in four straight games, and elite pass rushers such as Houston’s J.J. Watt and Pittsburgh’s T.J. Watt gave the Chargers fits.

“We’ve been fighting, we have starters down, we’ve been dealing with injuries, and what we’ve been able to prove as a line is we’re a resilient group,” Okung said. “But the expectation, the standard, is really high. We have to play better.”

Okung, a two-time Pro Bowl selection in his 10th NFL season and third with the Chargers, first felt shortness of breath and chest pains during the team’s offseason program last spring.

On June 1, at the insistence of his family, including his wife, Samar, he went to an urgent care facility, where doctors discovered the embolism. Okung was placed on blood-thinning medication, which had to clear through his system before he returned to action.

Okung cringes to think what might have happened had he not gone to that urgent care facility. Blood clots can lead to a heart attack or a stroke and a pulmonary embolism can block the flow of blood to the lungs and cause death.

“Look man, I’m appreciative about my life,” Okung said. “I’m alive and well, I have activity in my limbs, saneness of mind, I can go out and do what I have to do. I have a grateful heart, you know? There was a time when I was laying on a bed and trying to figure out if I would ever play football again.

“I’m so happy to be out there. I’ve been working my butt off every single day to get back and help my team win. To get a win in my first game back is great.”