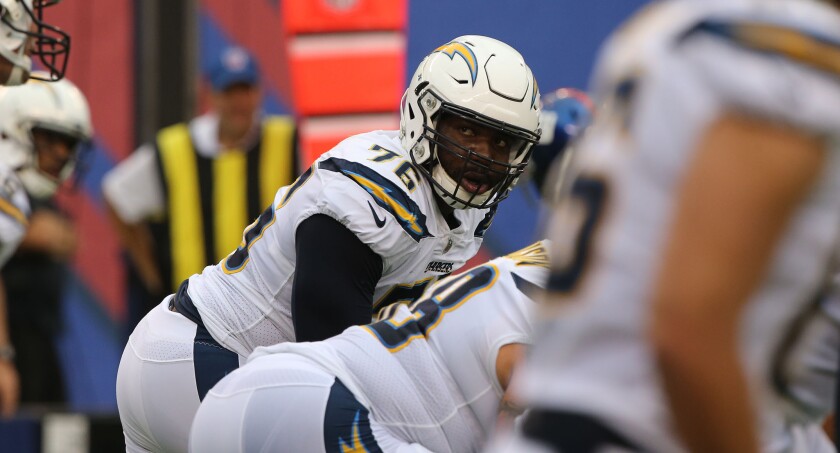 Russell Okung returned to the football field Thursday with the freshest legs among all the Chargers.

He also had the freshest perspective.

“I definitely looked death right in the face,” Okung said. “Had it not been for a family that cared about my well being and took the extra steps to make sure I got checked on despite my own resistance, I may not be here right now.”

Back in the spring, Okung said he first felt the shortness of breath and chest pains that affected his ability to continue participating in the Chargers’ offseason program.

On June 1, at the insistence of his family, including his wife, Samar, he went to an urgent care facility where it was discovered that he had suffered a pulmonary embolism caused by blood clots.

“Anytime you reach a situation where you face mortality, it gives you a lot of perspective,” Okung, 32, said. “I’m so grateful to be alive, one, and to be back out here with my teammates. I missed these guys a lot.”

He began the season on the non-football illness list and remained sidelined while the blood-thinning medication necessitated by his condition cleared through his system.

Okung, by rule, had to sit out the first six weeks of the regular season. Entering Week 7, the Chargers hoped their starting left tackle could return. He did so Thursday by participating in his first full-team practice in nine months.

The Chargers play at Tennessee on Sunday and Okung did not rule out attempting to be ready for that game.

He has been working on his own and on the side during some practices, but Okung hasn’t been involved in padded contact since the Chargers lost in the AFC divisional round of the playoffs at New England on Jan. 13.

“I’m talking with the coaches and the trainers,” he explained, “and we’re trying to put together the best plan for me to come back as healthy as possible.”

Trent Scott, a second-year undrafted tackle out of Grambling State, has been starting in Okung’s place. He suffered an ankle injury at the end of a 24-17 loss to Pittsburgh on Sunday and has been limited in practice this week.

The Titans feature a stout defensive front and rank fourth in points allowed per game and eighth in yards permitted.

“Every morning, I’ve been up at 6 or 7 a.m. making sure that I’m prepared to come back and play,” Okung said. “It’s just a matter of getting the pads on and feeling the speed of the game again.”

Without Okung, a two-time Pro Bowler, and now missing Pro Bowl center Mike Pouncey, the Chargers have struggled along the offensive line. They have been unable to run the ball, especially the past two weeks, and consistently protect quarterback Philip Rivers. They are 2-4 despite being favored in all six games.

Pouncey, 30, had season-ending neck surgery last week, and it remains unclear if he’ll be able to resume his career.

Despite his career being in jeopardy, Okung said he never stopped believing he’d play again.

“I’ve always been an optimist,” he said. “Family is a priority. Today is a combination of hard conversations with my family, my loved ones, internally looking at myself to figure out if this was the best decision for me.

“We made the decision together as a family that it did make sense for me to keep playing. I don’t think anybody ever doubted it.”

It has been a rough season health-wise for the Chargers. Even while welcoming back Okung on Thursday, they placed wide receiver Travis Benjamin on injured reserve because of a quadriceps problem.

They have been playing without six starters, five of whom have made at least one Pro Bowl. The sixth is kicker Michael Badgley, who provided desperately needed stability at that position a year ago. Badgley has missed the first six games because of a groin injury but was a full participant in practice Thursday, an indication he could return against Tennessee.

So, after weeks of losing players, the Chargers are starting to trend in the other direction. Running back Melvin Gordon will appear in his third game Sunday after a contract dispute cost him the start of the season.

Another injury concern for the Chargers is safety Nasir Adderley, who has been slowed since the spring because of hamstring issues.

Adderley, a second-round pick in April, has played mostly special teams during his four games this season. He has missed the past two weeks and isn’t expected to play Sunday.

“We’re trying to be patient with him and have him come back,” defensive coordinator Gus Bradley said. “I think he’s a guy that feels like he needs to be 100%. But he’s going to have to learn that you might have to play at 90 or 85 in this league. So he’s figuring that part out.”

It appears the Chargers will be facing some potential issues along their defensive front against the Titans. Edge rusher Melvin Ingram (hamstring), tackle Justin Jones (shoulder) and nose tackle Brandon Mebane (knee) all missed their second consecutive practice Thursday. In response, the Chargers filled the roster spot vacated by Benjamin by re-signing defensive tackle T.Y. McGill. … Okung and the Chargers reworked his contract in order to give him the opportunity to recoup the money he lost while on the NFI list and earn his entire 2019 base salary of $13 million.