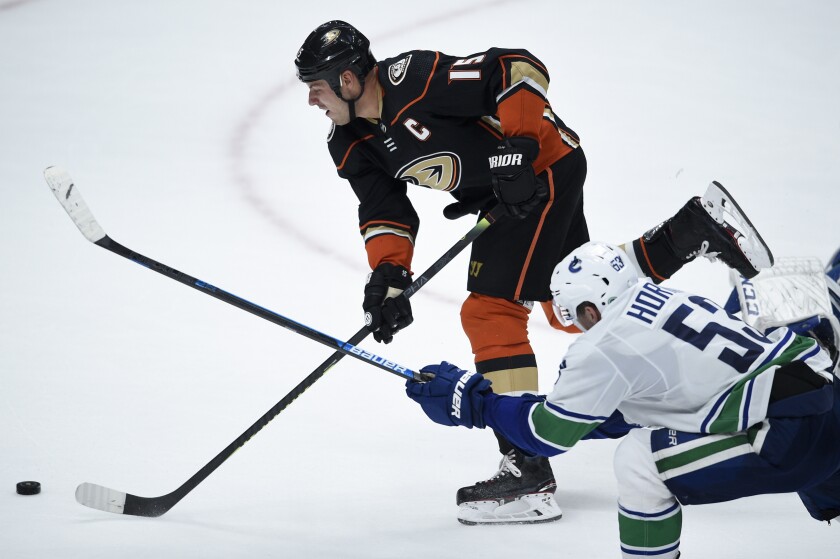 Troy Terry circled his net with the puck and looked up at the two Vancouver Canucks between him and Ryan Getzlaf way down at the far blue line.

“My instinct was to pass to him, but I thought, `Is that the smartest thing?“’ the rookie said. “So I just ripped it to him, and he’s Ryan Getzlaf, so of course he made a play.”

Terry’s long aerial pass eluded both Canucks and hit Getzlaf in the glove. The Ducks’ longtime captain settled the puck and sent Anaheim to another thrilling home win.

Getzlaf scored a breakaway goal 2:30 into overtime, and John Gibson made 39 saves in the Ducks’ 2-1 victory over Vancouver on Friday night.

In the 999th game of a career spent entirely with Anaheim, Getzlaf ended it with his seventh goal of the young season after that remarkable pass from Terry.

“Troy made a great play from behind the net,” Getzlaf said. “He showed great patience. Showed what he can do with the puck.”

While his passing acumen is well known, Getzlaf has one of the Ducks’ best shots when he deigns to use it — and he has used it lately, scoring in four consecutive games.

He only needed to tap in his winner, however: Markstrom charged out of his net in a desperate attempt to disrupt Getzlaf’s chance, but Getzlaf sidestepped the goalie and finished it.

“His first touch wasn’t the best, and I thought I had him beat,” Markstrom said. “And I didn’t. That’s the read I had. Obviously it’s easy to say now I should have stayed in (net), but I didn’t. Tough loss when we played such a good game.”

Both of these young clubs look like playoff contenders so far: The Ducks’ victory left Anaheim and Vancouver even on 18 points apiece in second place in the Pacific Division.

Jakob Silfverberg scored a short-handed goal in the first period for the Ducks, who improved to 6-1-0 at Honda Center this season with their second straight victory to open a seven-game homestand.

Adam Gaudette got credit for Vancouver’s tying goal with 6:18 to play when his apparent pass toward a driving Brandon Sutter deflected in off the skate of Anaheim defenseman Korbinian Holzer.

The goal came on the Canucks’ 38th shot during a frustrating evening against Gibson, who came close to his 19th career shutout in a phenomenal performance. Vancouver also went scoreless on five power plays.

“I thought our team was pretty good tonight,” Vancouver coach Travis Green said. “I don’t know how many shots we had, but almost 70 attempts is pretty good. Their goalie played well. The big thing is when you play a really good game, you want to get a point out of it. You’re going to play good some nights and lose. At least we got a point.”

Markstrom stopped 27 shots for the Canucks, who have earned a point in six consecutive games. Vancouver lost for only the third time in 11 games, and fell to 0-3-1 when scoring fewer than three goals.

The Ducks scored during their second penalty kill when Rickard Rakell got the puck to Silfverberg alone in front of Markstrom, his teammate for several seasons at the start of their pro careers in Sweden. Silfverberg made a nifty deke and scored his seventh goal of the season on the forehand.

Vancouver had a 32-11 shots advantage late in the second period, but couldn’t beat Gibson until the waning minutes of the third.