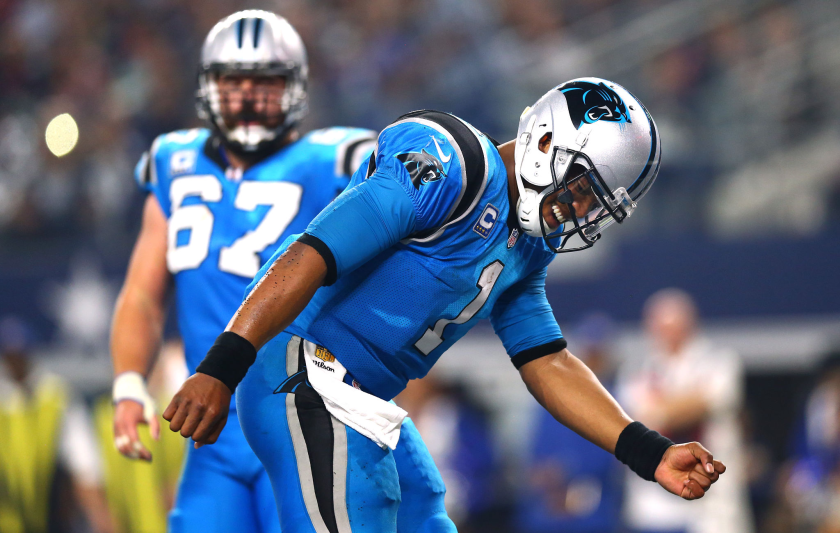 Quarterback Cam Newton is headed to the New England Patriots, and that puts his longtime center in an unusual — and somewhat uncomfortable — position.

“I never thought I’d be excited to watch the Patriots and root for them in this way,” said Ryan Kalil, who snapped the ball to Newton for eight seasons with the Carolina Panthers. “But I couldn’t be more thrilled.”

The Patriots haven’t officially announced the signing, but on their team website Sunday night they posted a story on how he’ll fit into the offense, citing ESPN’s report that the former No. 1 overall pick had signed a one-year deal.

In an Instagram post, Newton wrote: “I’m excited as I don’t know what right now!” and included the hashtag “#LETSgoPATS.” The 31-year-old star, the NFL’s most valuable player in 2015, was released by Carolina in March after nine years.

Kalil, a former USC standout who played for the New York Jets last season, praised the move by New England, which is beginning a new chapter without six-time Super Bowl-winning quarterback Tom Brady, who signed as a free agent with Tampa Bay.

“The Patriots got a player who’s had naysayers his whole career, and he’s dealt with them well,” Kalil said. “Cam has always been a guy who has done well when backed into a corner, and I think he’s highly motivated this season.”

Newton, 31, has dealt with shoulder and foot injuries in recent years and many teams saw him as damaged goods. By many counts, he’s been hit more than any quarterback in his era.

“People throw up the stat about how many times Cam’s been hit,” Kalil said. “But I’ve seen those in real time and I don’t think it’s accurate to say times he’s been hit. I would argue there’s a good amount of those where he was doing the hitting.

“I watched a lot of guys bow down from him and not want to take all of that. Because he is a large individual. He has the highlights of all the moves and spins and jumps, but people forget what an imposing physical athlete he is. When he first walked on the field, he looked bigger than some D-ends that we played against.”

Newton’s competition for the starting quarterback job is second-year Jarrett Stidham, who threw four passes as a rookie (one of them a pick-six), and 11-year journeyman Brian Hoyer.

At first glance, it looks like a prime opportunity for Newton, who in his career has passed for 29,041 yards with 182 touchdowns, and has run for 4,806 yards and 58 touchdowns.

“There’s an aspect of Cam’s game that will fit in well there, that’s not this dynamic-running-quarterback kind of stuff where people are saying this is drastically going to change their offense,” Kalil said. “I genuinely believe Cam will assimilate to the play calling and the type of offensive system that they’ll want to continue to run.

The NFL penalizes the New England Patriots for illegally filming the Bengals’ sideline a week before the two teams played in December last season.

“Is it going to be guns blazing right out the gate? I don’t know. There’s the question of lack of offseason and prep time that will weigh in. There’s a lot of work ahead on that.”

And that, Kalil said, might be Newton’s best quality.

“He has always been a great worker,” he said. “He’s not afraid of work. He’s one of the few teammates I’ve had where it’s not a 9-to-5 job, it’s an obsession. New England fans should be excited by the kind of work ethic that he’s always brought. He’s got a fresh start, a new beginning, and a lot he has to prove and wants to prove -- to no one but himself. And that’s the kind of guy you want on your team.”