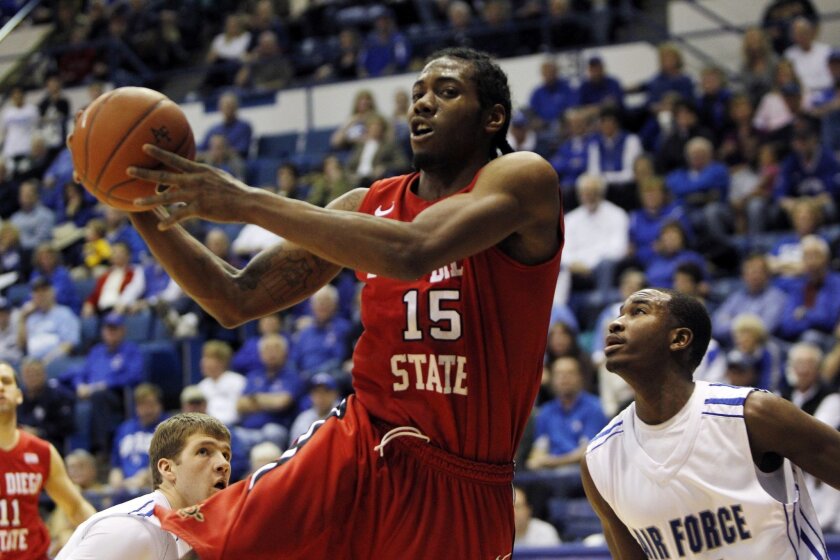 There are plenty of banners hanging in Viejas Arena for conference championships or NCAA Tournament appearances or even NIT appearances. There are no players’ jerseys alongside them.

There will be soon. San Diego State will honor Kawhi Leonard at its Feb. 1 game against Utah State by raising his jersey into the Viejas rafters.

Leonard plays a 12:30 p.m. Clippers game that day in Los Angeles. SDSU tips off at 7 p.m., and the ceremony is expected to be during halftime.

“To be the first to have your jersey hung in the arena is an incredible honor, and well deserved by Kawhi,” said coach Brian Dutcher, who was the lead assistant on Steve Fisher’s staff when Leonard came to SDSU from Riverside King High in 2009. “I like the fact that it’s for what he did at San Diego State. We all know what he’s done in the NBA, but he came in here and led us to a 34-3 record with maybe the greatest team in Aztecs history.”

It should not be confused with retiring his number, which was 15 in his two seasons on Montezuma Mesa. Retiring jersey numbers can get tricky in college basketball, since there are only 36 possible numbers you can wear (anything with a 6, 7, 8 or 9 in it is not allowed), and many schools honor former greats with a jersey and their name but no number.

The last Aztec to wear No. 15 was Ben Perez, as a freshman walk-on from San Marcos High in 2015-16. No one has since (and the expectation is that no one will).

His impact was not. The Aztecs went to the NCAA Tournament in both his seasons and were probably good enough to win a national title in 2010-11, losing a close game in the Sweet 16 to eventual champion Connecticut.

“I remember what a great teammate he was,” Dutcher said. “When I look back at Kawhi’s highlights, everybody looks at the scoring. I look back and I can’t believe what an incredible passer he was. I think that was undervalued by people, that Kawhi was a great playmaker for others and all he wanted to do was win.

“That bears out in his NBA career, that he’s more concerned with winning than anything.”

Leonard was taken 15th in the 2011 NBA Draft, just outside the lottery. He technically was picked by the Indiana Pacers but immediately traded to the San Antonio Spurs, where he spent seven seasons and won an NBA title in 2014. He won a second ring — and second NBA Finals MVP — last season with the Toronto Raptors before signing with the Clippers as a free agent over the summer.

“That’s what I wanted to do when I went there,” Leonard once said of his choosing SDSU over college basketball blue bloods. “I wanted to help build the program, and that’s what has happened.”